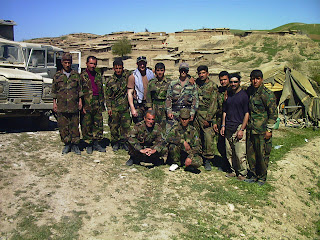 As many of you know and many do not I spend a lot of time doing "jobs" that aren't really jobs. My wife claims I am a workaholic and can't sit still, my kids say I have OCD. Bottom line is I try to keep myself busy because honestly ever since I retired from the military I get bored just sitting at home. I have several things I do on a regular basis and I thought I would write about each one of them.

When I was on a Special Forces ODA we did cross training on medical treatment procedures. This was out of necessity since there was twelve of us and we only had two medics. We often broke down into even smaller units so not every group got there own medic. However we still needed to manage any situation that may happen in training or combat, so our medics trained us. Special Forces medics are some of the most highly trained medical personnel in the military as far as trauma management and all around general medical practices. I trusted these men with my life, I even let one of them operate on my dog. That is how much I respected their skills. So long story short I spent a lot of time in the military training on medical issues even though I was not a medic. When I retired from the military I got this wild idea that I should get qualified as an Emergency Medical Technician both because it interested me and because I had this vague idea of applying to a fire department somewhere.

The fire department idea never happened but I did get qualified as an EMT-B. The course was ten weeks long, two nights a week, four hours a night. We started out with over thirty students and about 11 of us finished our national registry. Not that the training was all that hard but it took discipline to study around work etc... and as I discovered then and since outside of the military there is a lot of lazy floating around. Many of the "students" thought the instructor was being unreasonable when he/she asked them to produce results on a weekly basis. The class I took was fast paced, we went through two chapters of the text a night, followed by an hour of practical skills and every class ended with a must pass test on the material from the class before. The national registry exam consisted of a proctored written exam and a practical where you had to assess and treat a patient in three different scenarios either medical or trauma related. Reminded me of about every school I attended in the military, but like I said many couldn't and didn't make it through the training mostly due to lack of effort.

After graduating I used my skills sparsely for a few years, life took over and my idea to be an EMT went on the back burner. I did work part time at the local Minor League Baseball park for one season as an EMT which mostly consisted of me watching the game and putting ice packs on people who got hit with foul balls. Was a pretty sweet gig but it only lasted a few months. Eventually my certification was coming up for renewal and I discovered since I wasn't employed by any medical service ie.. a ambulance service, hospital, or fire department. I would have to attend a 24 hour EMT refresher if I chose to remain certified. After attending the refresher and getting re certified, I decided I better get on the stick and use my skills or give the idea up. I searched around the internet and found an ambulance service 15 miles from the town I live in that took volunteers, I applied and they accepted me.

The service I run with covers a rural area of over 150 square miles and services a population of a little over 6000. There are about 20-25 volunteers, we have 3-4 paramedics, most of the rest of us are EMT-B and we have a few volunteers that aren't certified, here is our website http://www.lmvas.org/. The service will send you to EMT-B class if you agree to volunteer for a year. The State of Iowa rates us as a Paramedic-minimal staffing service. That means we are a Paramedic level service but if one is not available we can leave the garage with an EMT-B as crew chief. If that EMT encounters a situation where advanced level skills are needed they can call for a mutual aid from the County Sheriff Paramedic or the paid service in the large town where I actually live. This doesn't happen too often as our Paramedics are some of the most dedicated volunteers I have ever seen and they volunteer hundreds of hours a month and go on dozens of calls all for volunteer wages and while holding down their own full time jobs. I and a few other EMT-B's are training currently to become future crew chiefs to re leave some of this workload however.

Since I live out of town and we are required to respond within seven minutes of a page I have to stay at the ambulance garage when I am on call. They have a little bunk room there with TV and internet access so it isn't too bad. My wife is awesome as usual and doesn't say one word about the 7-10 nights a month I sleep away from home. She is used to me being deployed anyway after 23 years of marriage the first 17 in the military.

Over 80% of the EMS services in Iowa are covered by volunteer services most of them rural. Iowa is also heavily geriatric so we get a lot of calls for older patients.  I actually attended a class this winter on GEMs (Geriatric Emergency Medicine) just because of this demographic. That is not the only type of call we get however. Since I have been on the service I have responded to unexpected home births, car accidents, serious trauma, hypothermia, motorcycle accidents, and a multitude of medical calls. Others on our service have responded to gunshots, suicides, and heart attacks. We pretty much run the gambit. I have learned a lot and I really enjoy the opportunity to use my medical training helping people. So next time you see a ambulance go by say a prayer for those inside and thank the volunteer who is in the back and driving the rig. They save lives for no or little pay so a thank you is always appreciated.Better yet hook up with a service and volunteer yourselves. If you're ever close to Highways 30 and 1 in Northeastern Iowa stop by and say hi.
Posted by mikemac356 at 19:33 1 comment:

Ran in the Alliant Energy 5K again this year as I have done every year for the last 10, unless I was deployed. Ran 4 minutes faster than last year but was still beaten by an 8 year old. I think he was from Krypton or someplace.
http://www.fifthseasonrace.com/results/images/results/96525th%205k%20overall.htm
Posted by mikemac356 at 20:48 No comments: 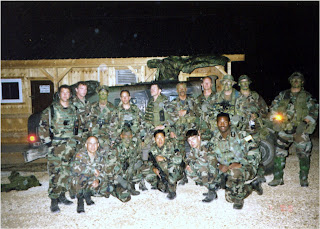