I spent my weekend attending the Dark Angel Medical DART class. Dark Angel Medical is a national medical gear and training company based in Colorado. The course description for DART is as follows:
I had been wanting to train with them for a few years as I am a fan of their gear. The 2 day course did not disappoint. The instructor was a fellow Paramedic and although  the techniques were not anything I had never seen I did pick up some pointers. It was a good way to spend a weekend with responsible people trying to become better. I would recommend this course for lay people that want to learn some life saving interventions.
Posted by mikemac356 at 13:56 1 comment: 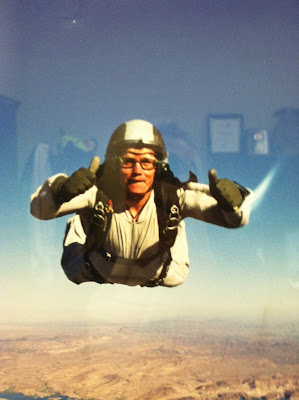 Back in the mid 1990's I was assigned as a Military Freefall Instructor at the John F Kennedy Special Warfare Center and School. It was the one time in my life I can truly say I was an expert at something. But it didn't start out that way.

My first task upon assignment was to pass the Instructor Candidate Course. I had been on a Special Forces Military Freefall team for a few years and had about 100 Static Line and 50 Freefall jumps. Most of those were combat equipment night jumps. Because that is how you train. Unfortunately to be an instructor you had to learn how to fly your body like you owned it and not just fall through space.

I struggled. I would exit the aircraft and tumble or once I got in a stable freefall position I would start buffeting and turning so bad I was teetering on being out of control. This went on for a few jumps. Finally one of the Candidate Instructors pulled me aside and said " Dude, you need to just arch and relax. Quit being so stiff." On the very next jump after I got belly to earth, I started buffeting. I remembered his words and I just imagined my arms and legs being long pieces of limp spaghetti and just let them flow in the wind. The buffeting stopped immediately and the problem never reoccurred.

Sometimes we try too hard. As I have gotten older I have become way more accepting of other's shenanigans and less tolerant of the stress caused by conflict. I try  not to worry about things I cannot effect or that do not really effect me. I try to follow Stoic philosophy in that regard. The guy with a degree in Political Science, now no longer pays attention to politics. It became too divisive and I was getting upset about things I couldn't change. Arguing about Elephants and Donkeys on Facebook is not how I want to spend my time.

A little over two years ago I took up training in Brazilian Jiu Jitsu. Getting smashed by a guy 20 years younger while redlining your cardiovascular system is a great way to remain humble. Being humble is a great way to go through life. I am still working on it. I am still working on being a better me. One percent better the philosophy of Japanese Kaizen has become my goal. Small improvements everyday.

All you need to do is Arch and Relax