Evansdale to B Team FKT: The plan

I have been talking about running this route for a few years now. There is a crushed gravel/paved rails to trails route from Evansdale Iowa all the way to Iowa City Iowa if you can navigate it. It goes by several names as different trails and urban routes hook up. I have run sections of this trail, some many many times but i have never strung them all together. This weekend in honor of my 51st birthday I am going to attempt a Fastest known Time (FKT) on the Cedar Valley trail portion. It will be unsupported except what i carry and buy along the way. It should be a hoot. I will report back

Freedom 5K and Mines of Spain Trail Half Marathon 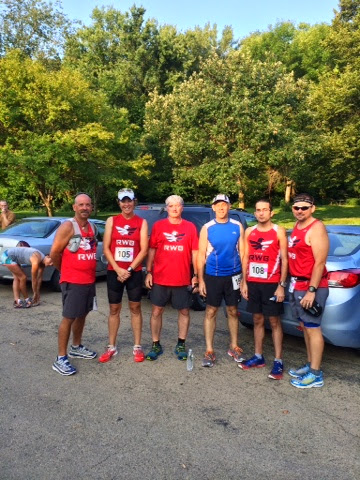 Did a few races last week. A 5K in E Moline ILL and a Half Marathon in Dubuque IA. great TeamRWB turnout 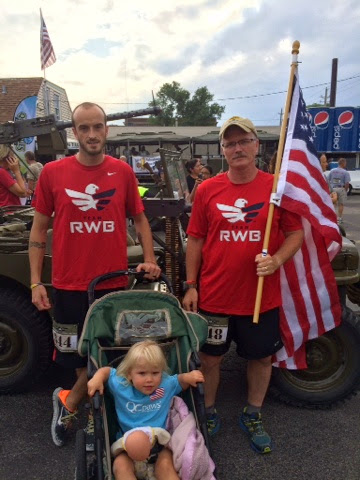 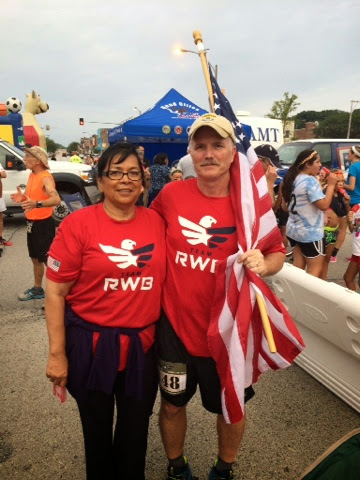 The 5K was great ran with our QC field team leader and Veterans OutreachDirector. Also my Wife tagged along. Grahm was pushing his daughter in a stroller and I carried Old Glory.
The Mines of Spain  half Marathon was tough and hilly as always. Great race as well. I ran with a fellow RWBer Denise for almost 7 of the 13.1 miles.
Here's to more RWB fellowship!!
Posted by mikemac356 at 21:39 No comments:

I entered this story in a Veteran's writing contest at the University of Iowa. I received a polite rejection letter. Good thing I have my own blog. Enjoy!!


The moon was playing peek a boo behind the mountains surrounding the former Soviet military base in Bakhmal Uzbekisatn. I could hear the wind blowing through the pine trees surrounding the small brick building that housed the based sauna or banya. I watched as several of my teammates wrestled their Uzbeki counterparts in the snow that had drifted between the trees.
In November 2001 I was the Team Sergeant on a Special Forces “A Team” in 10th Special Forces Group. We had deployed shortly after the attacks of  9/11/2001 to the country of Uzbekistan to provide counter terrorism and humanitarian training to Uzbeki special operations forces or Spetznatz. We had been required to utilize a series of civilian flights as the War in Afghanistan had just begun as had priority of all military flights to the region. Our operation was a sideshow to the main effort.
Back at home base we had packed all the gear needed for a six month deployment in boxes weighing less than 75 pounds so we could meet the airline weight restrictions. We looked more like a bunch of college kids heading on spring break than a elite military unit deploying on a real world mission. Except for the crates of weapons and all the camouflage. The flight from Ft. Carson, Colorado to Tashkent,Uzbekistan took almost 24 hours . This did not include the 6 hour layover in Paris where I hired a cab and did a quick sightseeing tour of Notre Dame cathedral and the Champs Elysees. I managed to drink some coffee at a café within sight of the Arc de Triomphe, very bohemian.
Once we landed in Tashkent we cleared customs and hooked up with our liaison at the US Embassy. We procured some SUV’s and interpreters and took a 200 kilometer road trip through bandit country, eventually arriving at the military base in the Bahkmal region. Bahkmal was mountainous and primitive. To get to the front gate of the base you had to ford a wide stream that had no bridge. Our barracks had cots and cold running water. Our medic hooked us up a shower utilizing a bucket and hose. The heat was steam and would go off frequently. Power interruptions were common. The snow was deep as winter came early in the mountains.
We spent our days training the Spetznaz soldiers in marksmanship, close quarters battle, land navigation, patrolling techniques, and human rights policies. In the evenings we busied ourselves with more training or leisure activities like writing letters or reading.
One evening, after we had been in country a month or so, our counter parts invited us to go to the Banya or traditional Russian sauna. We jumped at the opportunity to experience this tradition. Not only would it cement our relationship with the Uzbeks it would let us experience our first hot water in a month. It was on like Donkey Kong!!
After training was over for the day and we had eaten our fill of the mystery meat served by the mess hall, one of the Uzbek platoon leaders came by and gathered us up for the trip to the banya. We grabbed our towels and wearing flip flops and running shorts we followed the LT down the snowy dirt road to a small brown brick building. There was no sign of its purpose other than a sheet metal stack coming out of the roof.
When he opened the door we could hear the Uzbek soldiers conversing in Russian and Uzbek as they lounged on plastic patio chairs in the combination dressing room and lounge area. Our hosts had smuggled in some beers and were busy inspecting the contents as they waited for our arrival. My teammates soon joined them as I explored the banya.
The banya consisted of three rooms. The aforementioned lounge and dressing area, the sauna, and a small pool that was about 10 feet long, 8 feet wide and 8 feet deep. Our host told us that after sitting in the sauna it was healthful to jump in the pool. Eventually we piled into the sauna. Once we entered and sat on the hot wooden benches the doors was closed. A small brazier with hot coals and rocks sat in the corner producing a heat so hot and dry it took your breath away. Sweat instantly poured from my body in great rivelets falling to the floor as it dripped off my elbows and any other right angles my body had produced.
I am not sure how long I sat in the sauna but it seemed like a long time. Once I could stand no more I went to the next room and jumped in to the pool. That is when I discovered that the water was ice cold. My lungs spasmed and I swallowed some water until I got my bearings and calmed myself. The opposites of hot and cold were supposed to have a healthful and therapeutic effect on the body. I repeated this cycle 3 or 4 times until I decided to take a break and step outside.
It was when I stepped outside that I discovered the wrestling match going on amongst the trees. Several of my teammates had been convinced by our counterparts to experience the banya in the traditional way. This involved running from the sauna and diving into the knee deep snow. Eventually this activity combined with the beers devolved into wrestling. I stood by the building enjoying the evening, gazing up into the mountains and thinking about my family half a world away.
We would leave Uzbekistan within a month, in six months we would be in Kosovo, in eighteen months I would be infiltrating behind the lines in Iraqi Kurdistan. But that was in the unknown future, at that time and in that place I was living for the moment.