There is a show on National Public Radio called A Prairie Home Companion . The show and its host Garrison Keillor have been producing the show since the early 1970's. It is an old time radio variety show with music,skits and comedy. My dirty little secret is I have been listening to the show for years. Many that know me know that I am anything but liberal and the show definitely leans that way but somehow I just enjoy it. Recently my wife and I had the opportunity to see the show live in our home town. It was a great evening. Beautiful night in an outdoor amphitheater. I did find it very interesting that these NPR listeners who claim to be for diversity produced about the most undiversified audience possible. This guy right here,who spent the morning before the show at the gun range and that has voted libertarian in the last 3 election cycles brought the only minority to the show. That had to be the whitest audience I have ever seen at an event. Struck me somehow as very telling. Talk about white privilege, there it was, but not how it is portrayed in the media. Enjoy some photos. 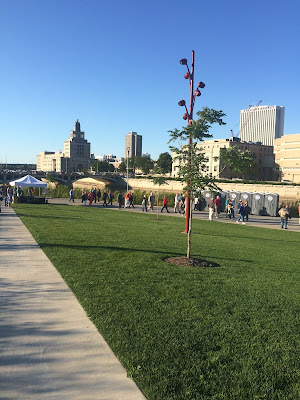 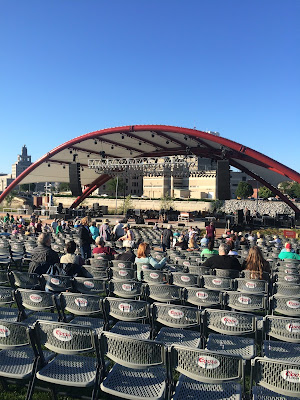 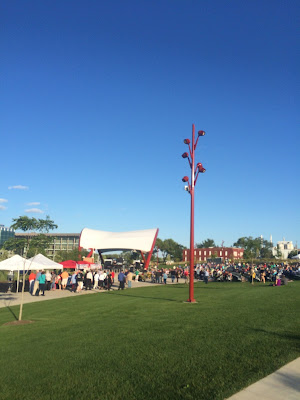 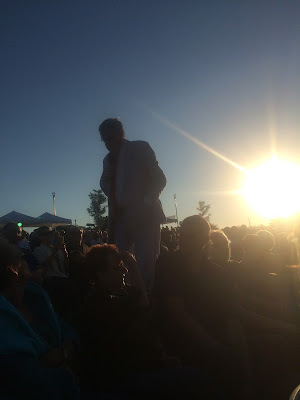 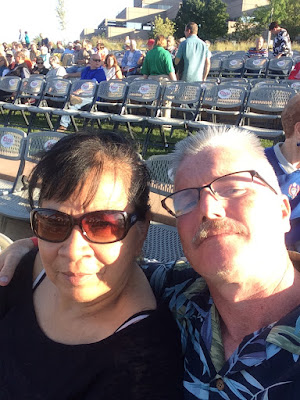 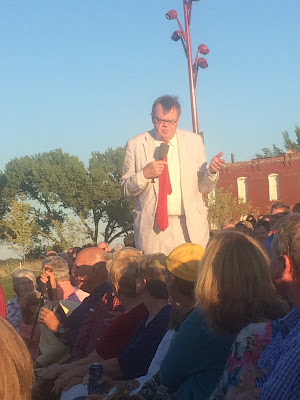 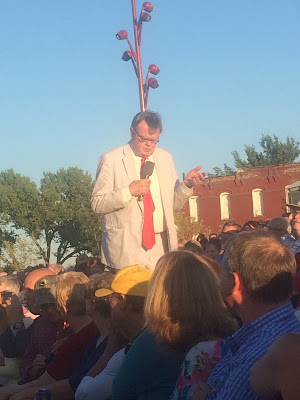 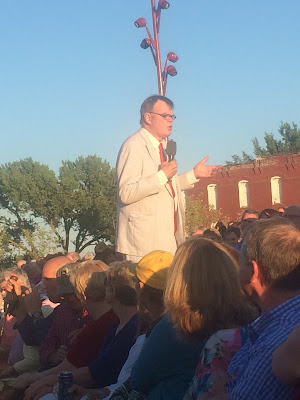 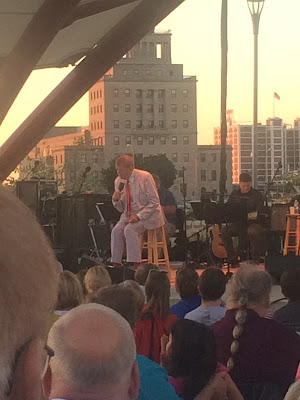 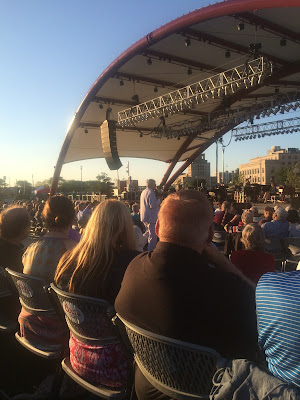 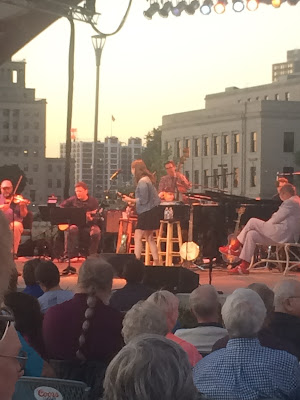 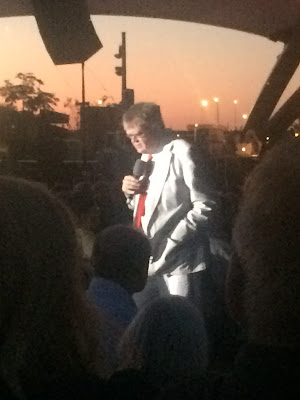 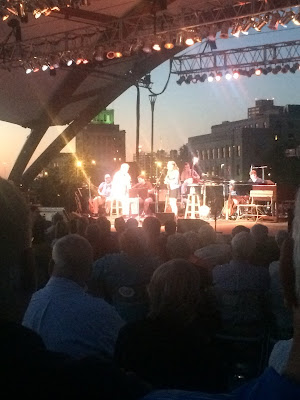 I have two things to say about these young women. From all I can find out they have been stellar performers and over achievers their whole lives. Athletes,West Point etc.. Not to mention they volunteered to endure the media shit storm that has engulfed them. So number one BRAVO!! If I know anything, the nay sayers claiming they had it easy or the course was altered do not have the facts straight. All first hand accounts and data suggest this course was as hard or harder than the average Ranger course. The other rock solid thing you can count on is that the Ranger Instructors did not lower the standard. That would compromise their integrity which is something that does not happen. There is one standard..The Ranger Standard. If these young women graduated then they met the standard.

Number two is I am not sure how I feel about this. I feel the same as when they tore down the old cabins at the Mountain Ranger camp losing all that history. I can't put my finger on it but I feel as if we missed the point here. Equal opportunity does not mean every opportunity. Ranger school has a purpose and the purpose is not to satisfy any particular agenda but to produce war fighters. If we have done that here then bravo and bravo to these two women anyway. Hopefully they and the women that follow will go forth and be better leaders. But if this is isolated and a social experiment. If this happened to allow individuals to get promoted then it is wrong. The military is not about individual achievements. I am a fan of this but I hope it is being done for the right reason. Things need to mean something.

I was turned on to a podcast recently called the Pressure Project . I have been listening to it that last few days and while some may accuse it of being misogynist I find it resonates with me. It is not anti female rather it is pro male and rejects the politically correct version of manhood that I have never subscribed to. It did get me thinking though. I have a lot of beliefs on what it means to be a man but I have never written them down on paper on purpose. So I thought I would do that now.

1. Men are tribal- Men gravitate towards others with common beliefs. Outside of our immediate families we need a peer group to interact with and hold us accountable. No one else but the tribe can let a man know when he is shirking his duties . The tribe is what encourages men to be warriors and defend their family. You know you are with your tribe when you can say truthfully "these are my people." That is why I believe military service or other public service has such a profound effect on men. They  become part of the tribe or they don't. Either way it is significant.

2. Men defend- As a man it is our responsibility to defend our families and those we care about. To a certain extent is is also on us to protect those that generally cannot protect themselves. This responsibility cannot be delegated to law enforcement or government as some would have you believe. It is a man's responsibility as a man. You are the first line of defense. If a thug is beating and raping your wife upstairs and you know by running up the stairs you face certain death a man does not escape and call the police. A man goes up the stairs and defends. Law enforcement is secondary.

4. Men strive for fitness- I fully realize the difficulty in attaining and maintaining fitness. I have attained many and varying levels of fitness throughout my life. As I get older my definition of fitness has also changed. What I used to think was sub standard now I am ok with. As age progresses I have come to the realization that the point is a man continues to strive for fitness to the best capacity he can. To neglect the opportunity to have the best fitness level you can is makes you less of a man. Those whose slack jawed body language surely shows they haven't touched a weight in their life are not men. Relentless forward progress.

5. Men show compassionate- A man has empathy and compassion for others. This does not make him weak but makes him a good leader. Compassion for others and the demonstration of this through the various non profit organizations and volunteer opportunities show how a man gives back to society. Men set a good example.


Suffice to say if you are not living these 5 principles and striving to meet them within your own set of circumstances then you are still a child and not a man.

Email ThisBlogThis!Share to TwitterShare to FacebookShare to Pinterest
Labels: manliness, what a man should know

Everyone gets a Medal: Army Fail

I was recently made aware of a US Army Training and Doctrine Command regulation 350-6 dated 7 Nov 2013 "Enlisted Entry Training Polices and Administration." 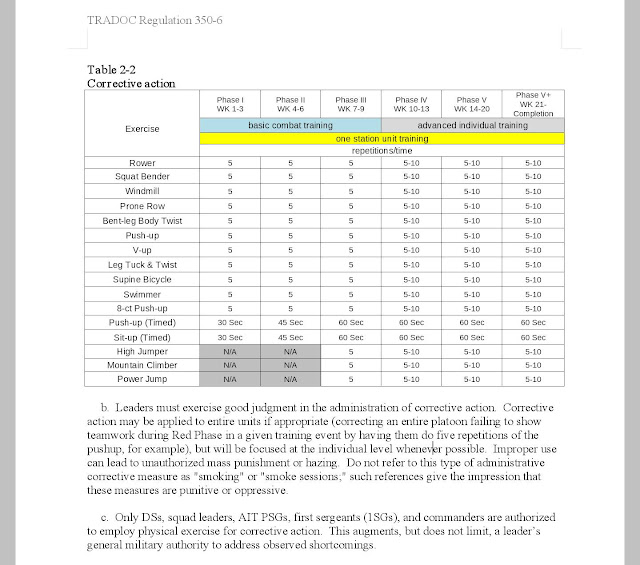 5 repetitions? Are you shitting me? 5 repetitions doesn't even get anyone's attention. As a slightly overweight middle aged male I could knock out 5 repetitions of these exercises without breaking a sweat. Your 20 something recruit is laughing as they do these. This is the military finally bowing to the "everyone gets a medal" political correctness. In an effort not to hurt anyone's feelings or gets sued for "being mean" Basic Training has jumped the shark.

We are not teaching our new warfighters that actions have consequences. You think the Taliban or ISIS is going to say "My bad American pig dog, lets call a training timeout"? Corrective and exhausting physical training has many benefits. It builds esprit de corps, teamwork, physical fitness, the will to survive. It forms personalities in a positive way.

One of the formative episodes in my life was when then SSG later SGM (R) Lamb smoked my entire Pre-Ranger class for a dropped flashlight. We did 1000 4 count flutter kicks and he did them along with us. 1000 is a lot more than 5 and it taught me a lesson about equipment accountability that I have not forgotten over 25 years later.

My point is that the Army has let the pendulum swing to far. Corrective physical training is a time honored tradition in the military. New recruits expect it. By robbing them of this activity you produce weaker soldiers, weaker units and you cheapen the entire military experience.
Posted by mikemac356 at 20:52 No comments: