Marshmallows and chocolate chips in one of those little Dixie cups. You know the kind you used to pull out of the dispenser by your sink? And a wooden chair on a wooden floor. Those were my first memories of my Grandmother Mary McElmeel.  I never knew my Grandpa McElmeel, he died in 1952, 11 years before I was born. Grandma died yesterday. She was 98. We were all by her bedside at the end. I got to hold her hand as her heart beat slower and slower and her respirations became more irregular and farther apart. She never regained conciousness  in the last hour of life. I like to think she knew we were all there. And then she stopped.

My Grandma was a widow for 64 years, she raised a family mostly by herself in a time when that wasn't as easy as it is today. She was a teacher for over 30 years. She was a farmer. She lived alone and independent until her last day on earth. She never suffered from any of the altered mental status issues that plague so many folks as they get older. My Grandma loved to play cards and Yahtzee. She didn't like to lose at cards. She was stubborn. She never criticized anyone that I know of. The most you might get out of her was a " I don't care for that." My Grandma had grandchildren, great grandchildren, and great great grandchildren. My Grandma used to smile at me. She sent me a birthday card every single birthday, my whole life. I wasn't the only one, she did it for all her grandkids, great grandkids and great great grandson.

Marshmallows and chocolate chips in a Dixie cup. Her apartment under the Post Office. Shooting cottage cheese out my nose at Thanksgiving because she made me laugh. Our lunch time card games. I will remember those. Goodbye Grandma you did your job.

Email ThisBlogThis!Share to TwitterShare to FacebookShare to Pinterest
Labels: Grandma 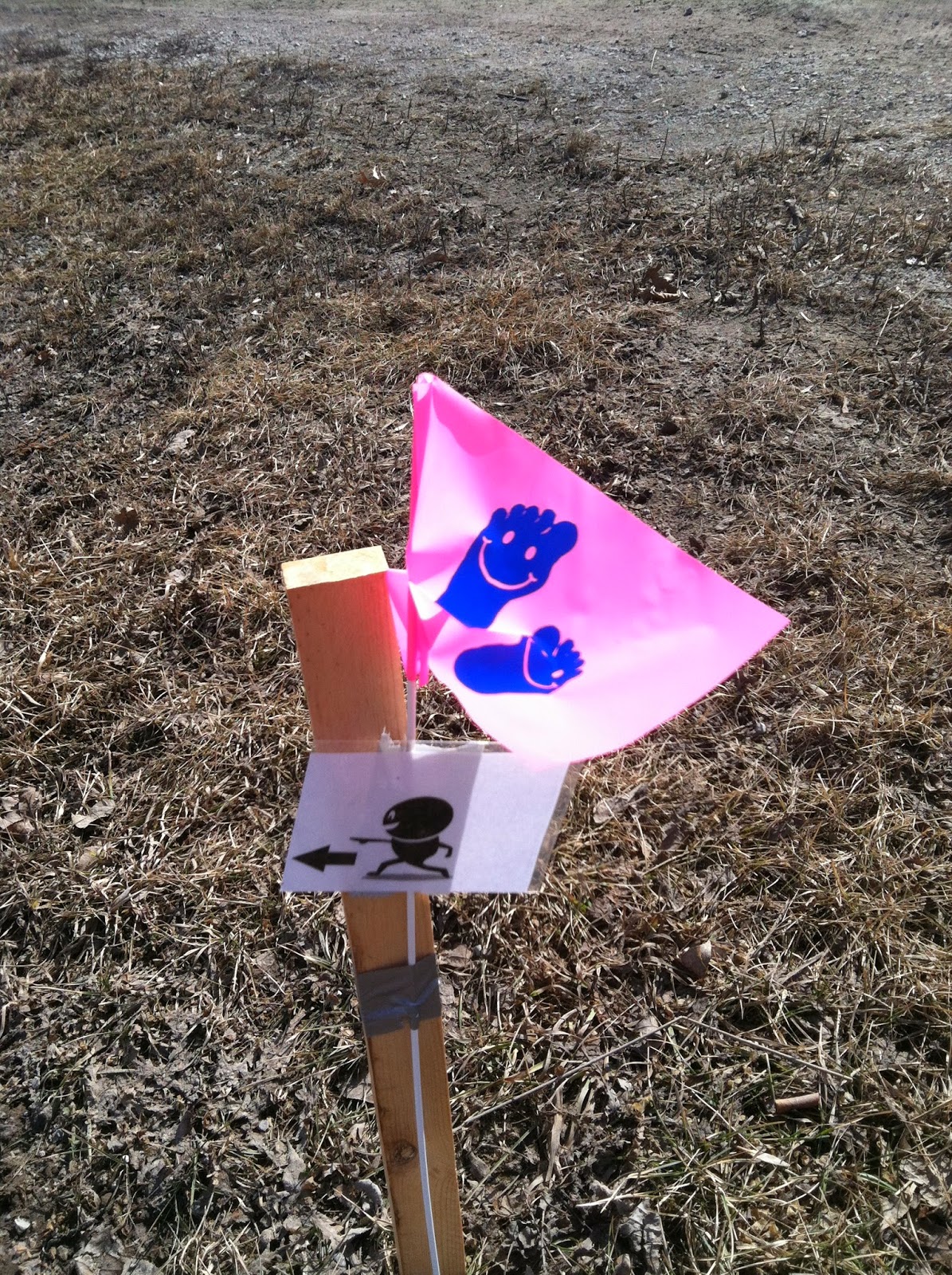 I hadn't run a race since back in November when I ran the Wildcat 50K. Hell, I haven't  run a single run of over 14 miles in all this time. My training has been spotty at best. I had been ignoring it for months but I had to admit after Wildcat that I was injured. How could I be injured? I had set personal bests at the 50K and marathon distances in back to back weekends. I had run over 14 races of marathon distance or greater in 2013 including my first 100 mile finish. But my Achilles tendon who I affectionately named Chucky was having none of it. During Wildcat it tightened up so bad that my right leg felt like a rubber band about to snap. The pain was not debilitating but it felt like a cattle prod was massaging the entire length of my right leg anytime I ran over 8 miles. Not a big deal for some but to me this was bad news. I would run 20 miles on a whim. Running long distances is what I did for relaxation and social activity. But for the balance of November I quit running, I tried again in December and no go. It was still painful. I tried Yoga, I tried lifts, I tried a compression brace. Nothing helped. Finally I put on my heart rate monitor and forced myself to run below my aerobic threshold. This resulted in short slow runs but it also resulted in Chucky starting to heal. I did this during January and February. I barely ran 100 miles for the month but at least I was running.

Then March came and the 4th iteration of the Hawkeye 50K. The first Hawkeye 50K had also been my first ultramarathon back in 2010. I had run in and finished it in every year since then. I had a streak going. I was going to run this race even if I had to walk it. So I registered and hoped for the best. I was cautiously optimistic in the 2 weeks before the race as I was able to run 10 miles or more on a few days without a lot of issues.

Finally the day arrived. The night before I was nervous. Nervous as I hadn't been for a long time before an ultra. I arrived early for the start and to help set up. This year and organization I belong to Team Red White and Blue was manning an aid station. So I helped them get there supplies together and then hung out in my car until the race start. The RD let me say a few words about TeamRWB before the race and we got a group picture with some of the local vets. This race had a lot of my friends present. Ross was running this 50K for the first time but not his first 50K. Jen was running her first 50K, Bennie and several others were running the 25K. Brian was acting as co race director. It was great to be back amongst my peeps. 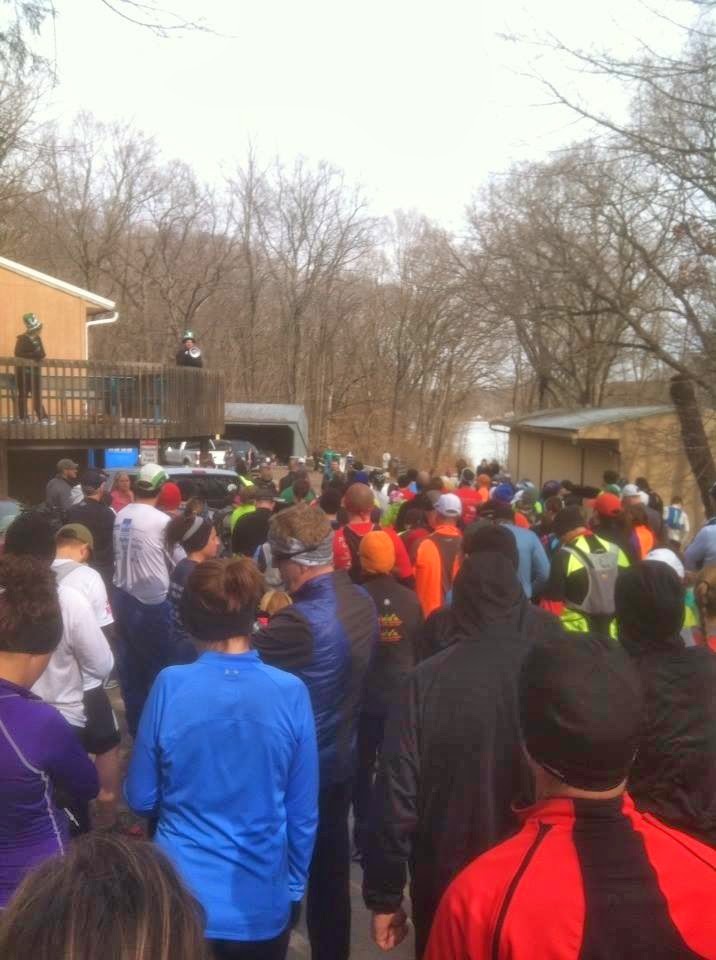 In the past the 50K had been two laps around the Coralville Reservoir but this year snow melt denied us the ability to cross the spillway that separated one side of the reservoir from the other. So we would head out on the regular route until we hit the spillway only to turn back and retrace our steps until we arrived back at the start finish at mile 22.  These 22 miles were mostly on road or flat gravel trail. The last 9 miles would be a small out and back and several loops on the trails. More on this later. When the race began I continued to chat and started out intentionally slow. Pretty soon though I found myself alone. I hadn't run an ultra without the company of my friends in over a year. I wasn't sure how to handle it. So I slipped in the headphones and cranked up the metal. That seemed to work. I kept it easy and relaxed and I hit the gravel trail at 4.5 miles feeling very fresh. I chatted to the aid station volunteers at the TeamRWB aid station and thanked them. 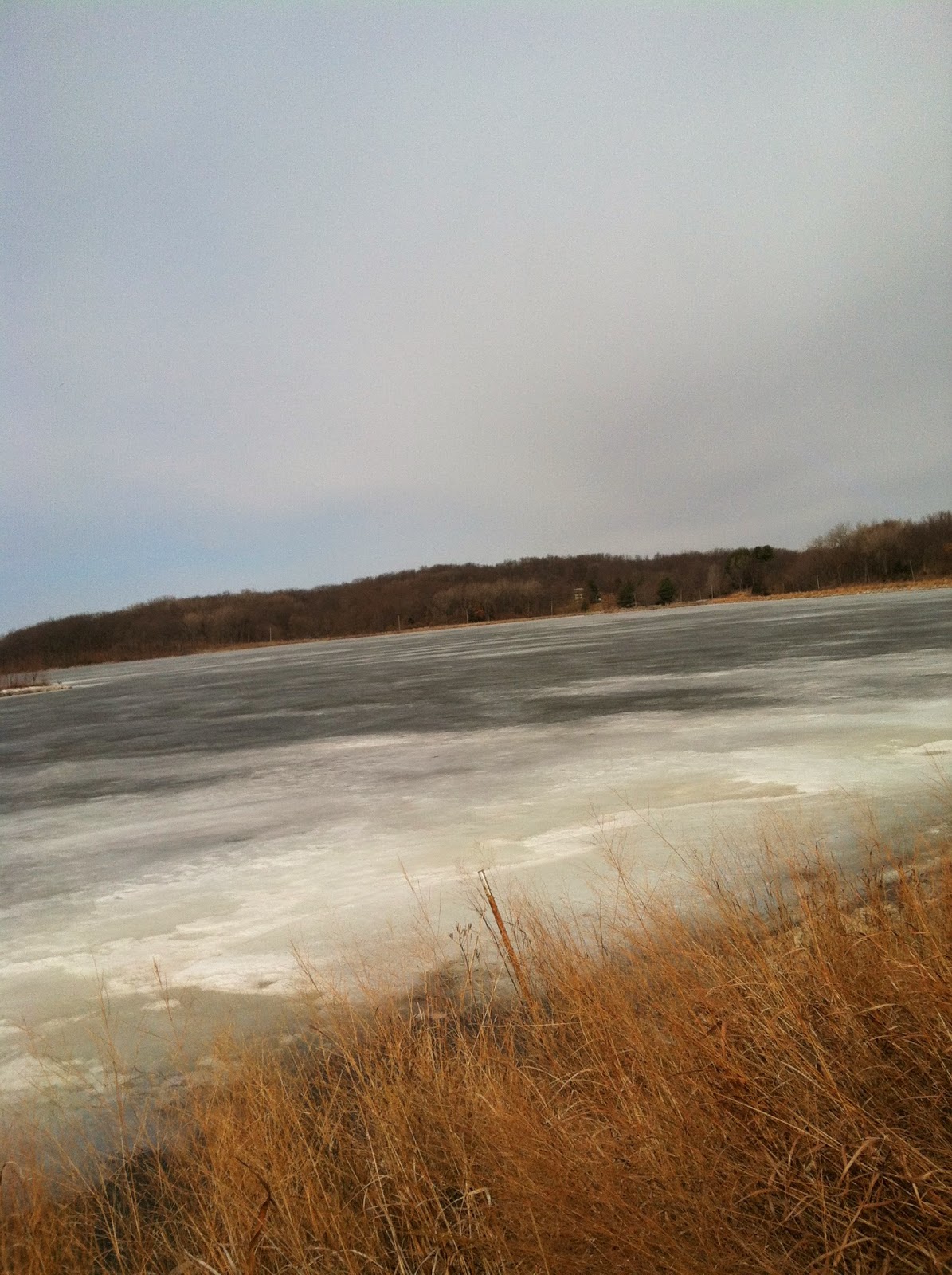 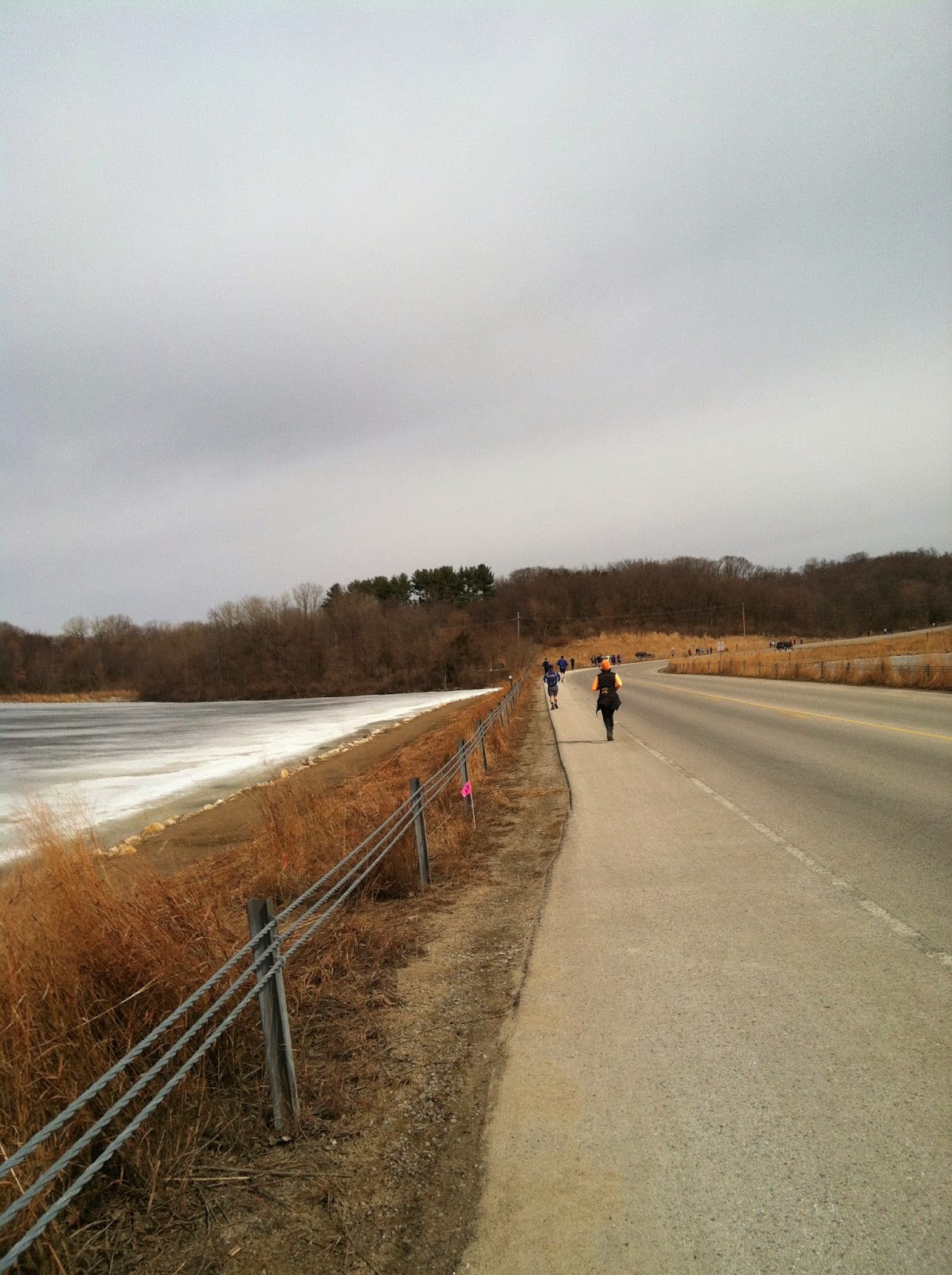 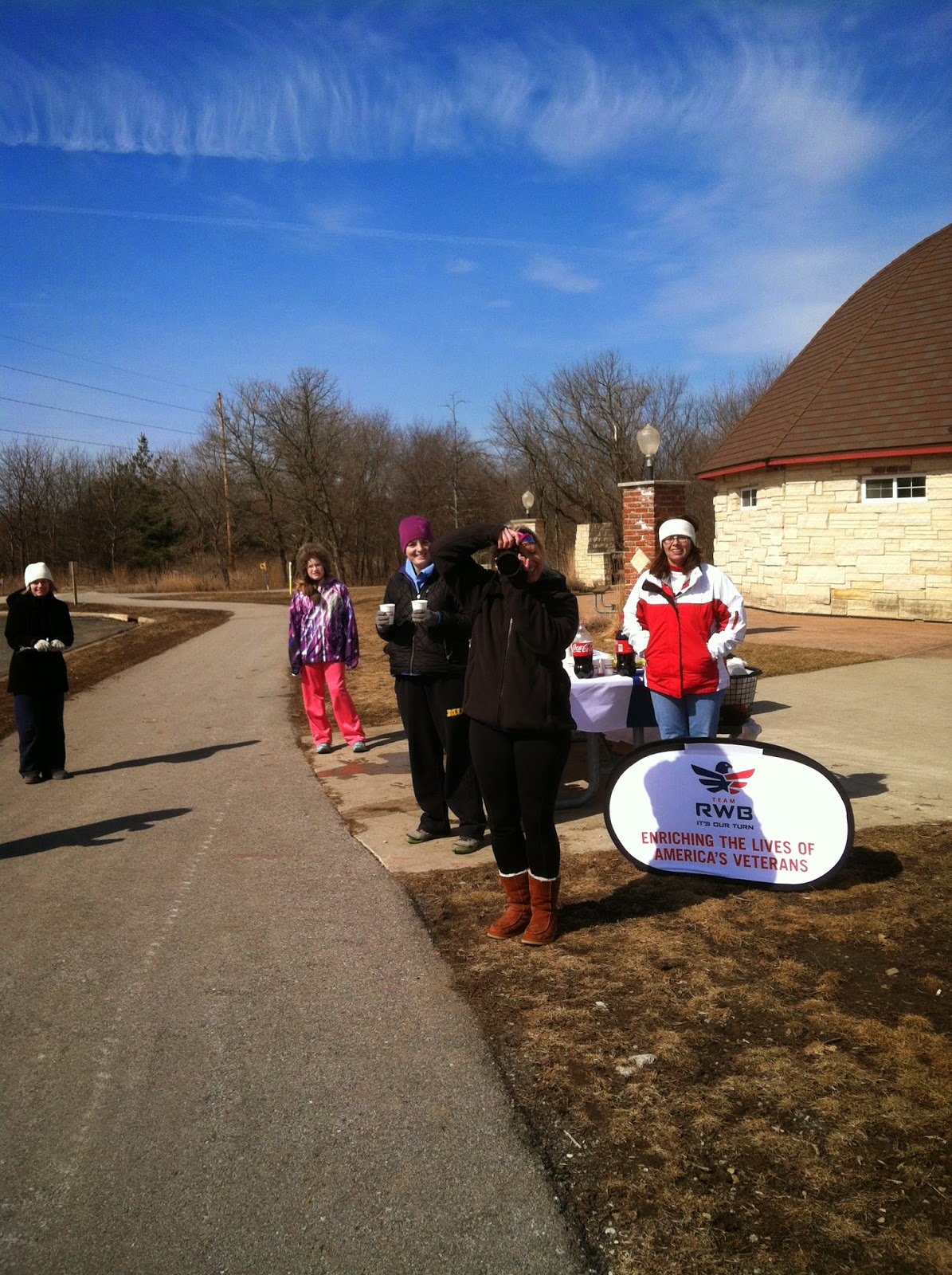 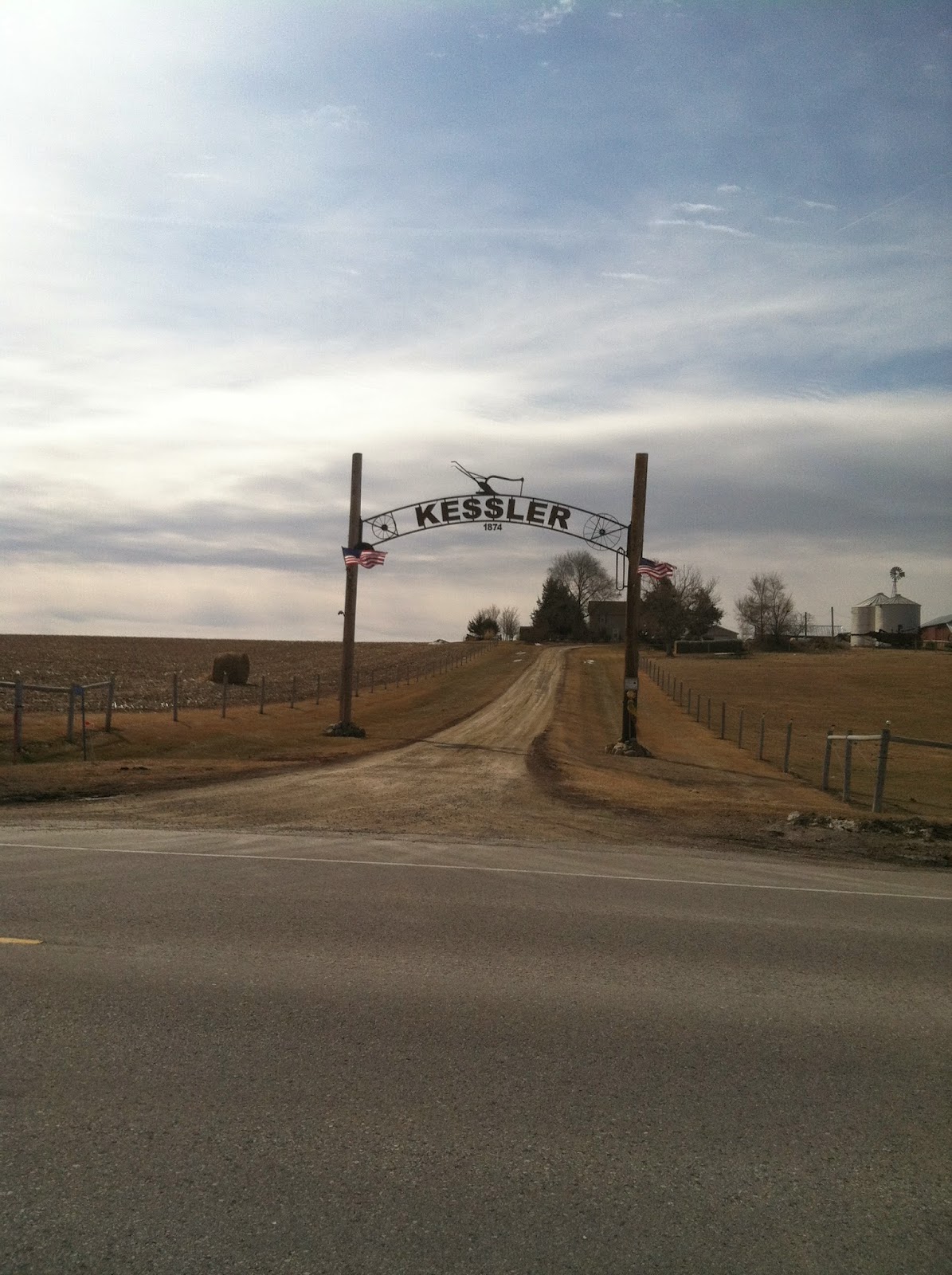 The trail around the lake was wet,muddy and icy. But it was flat and easy enough to negotiate. Not to much wind off the lake and I continued to cruise along. About 8 miles into it the lead pack blew past me going the other way. The had already hit the turnaround at 11 miles. Ross was in this group of 4 so I shouted some encouragement and kept going. I hit another aid station at mile 9 and filled up my bottles etc.. I could see the large hill that marked the turnaround in the distance. I headed toward it and climbed to the top to touch the flag. I then headed back retracing my steps hitting all the aid stations until I hit the pavement again at roughly mile 17. 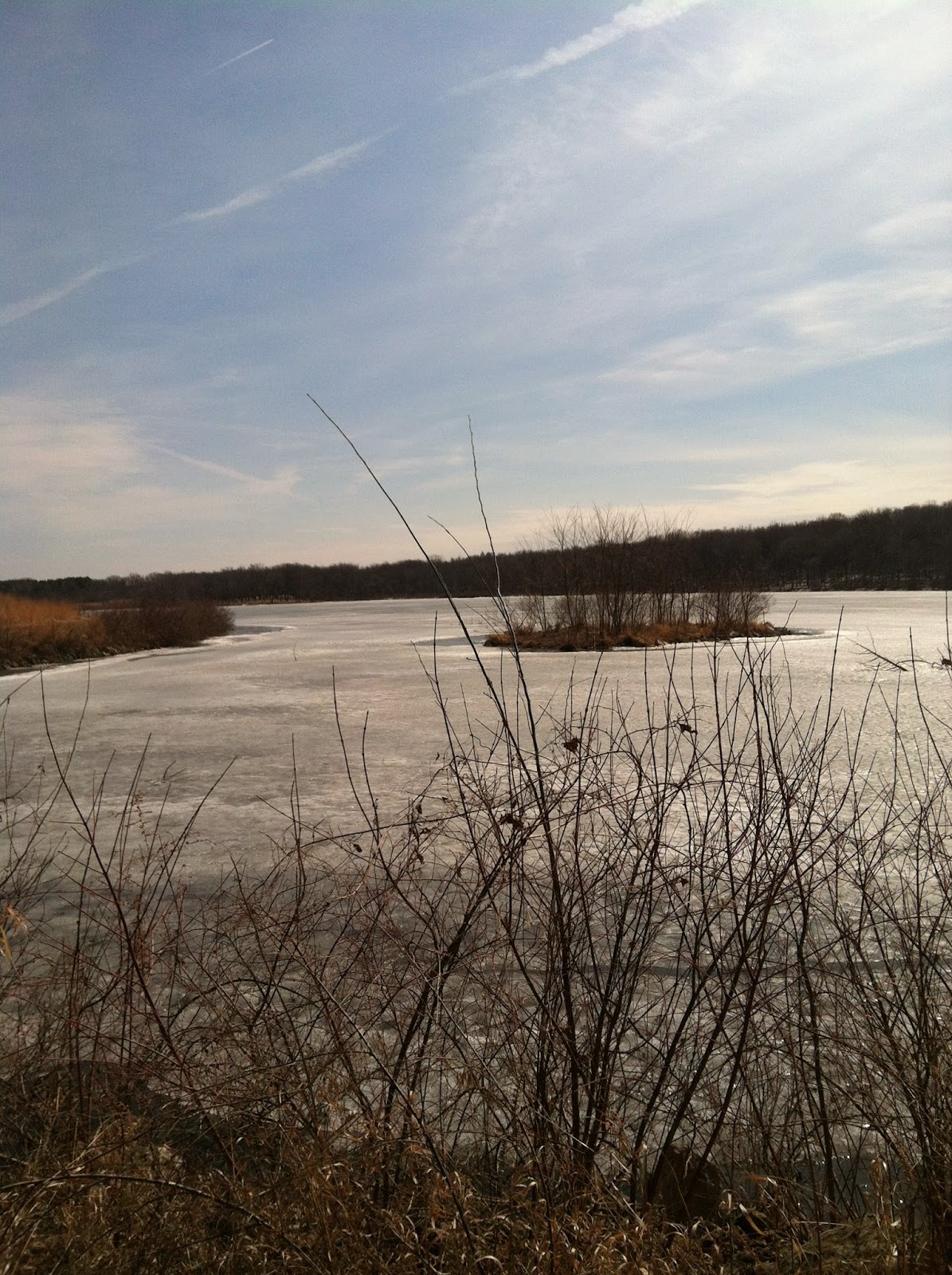 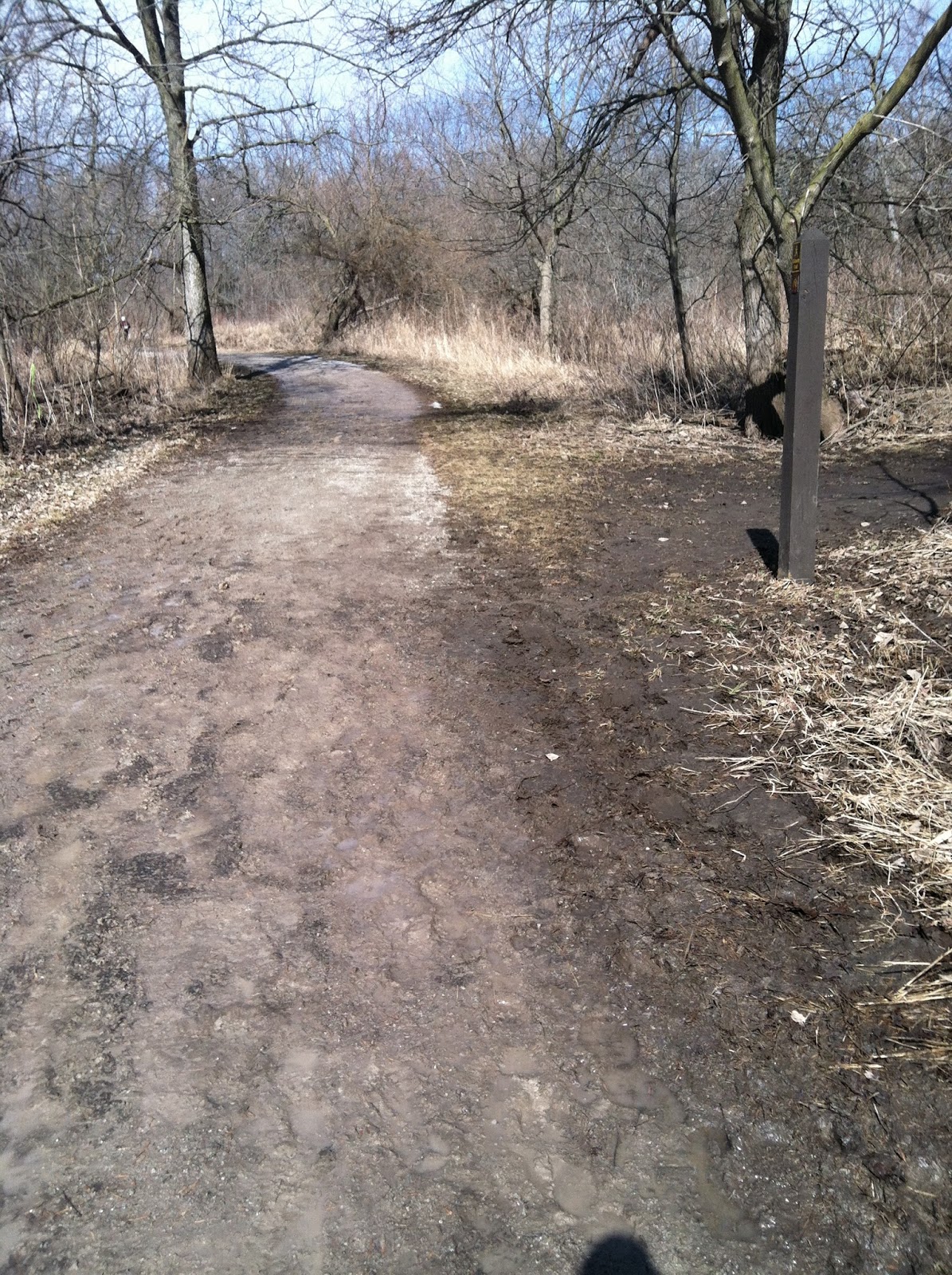 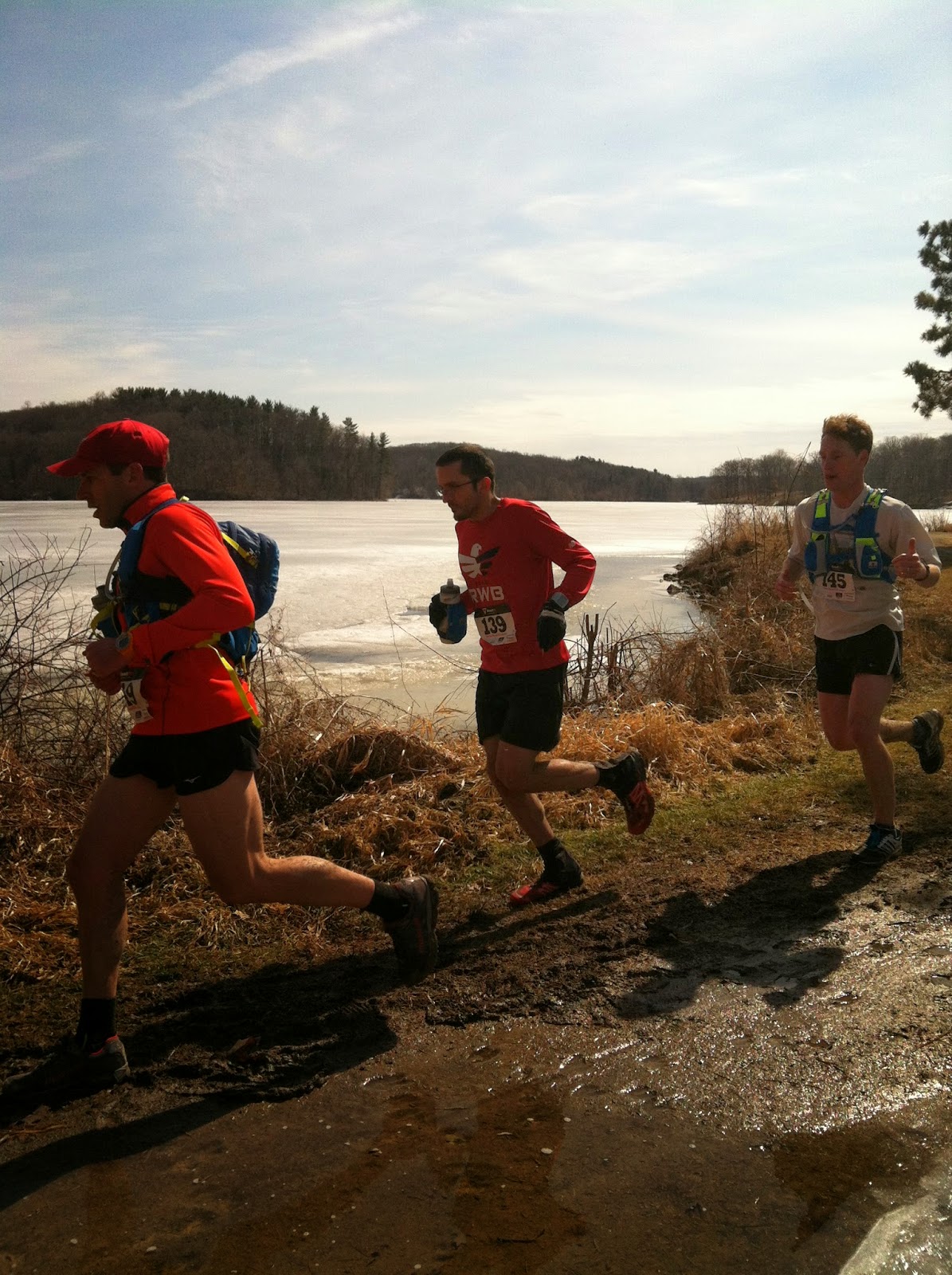 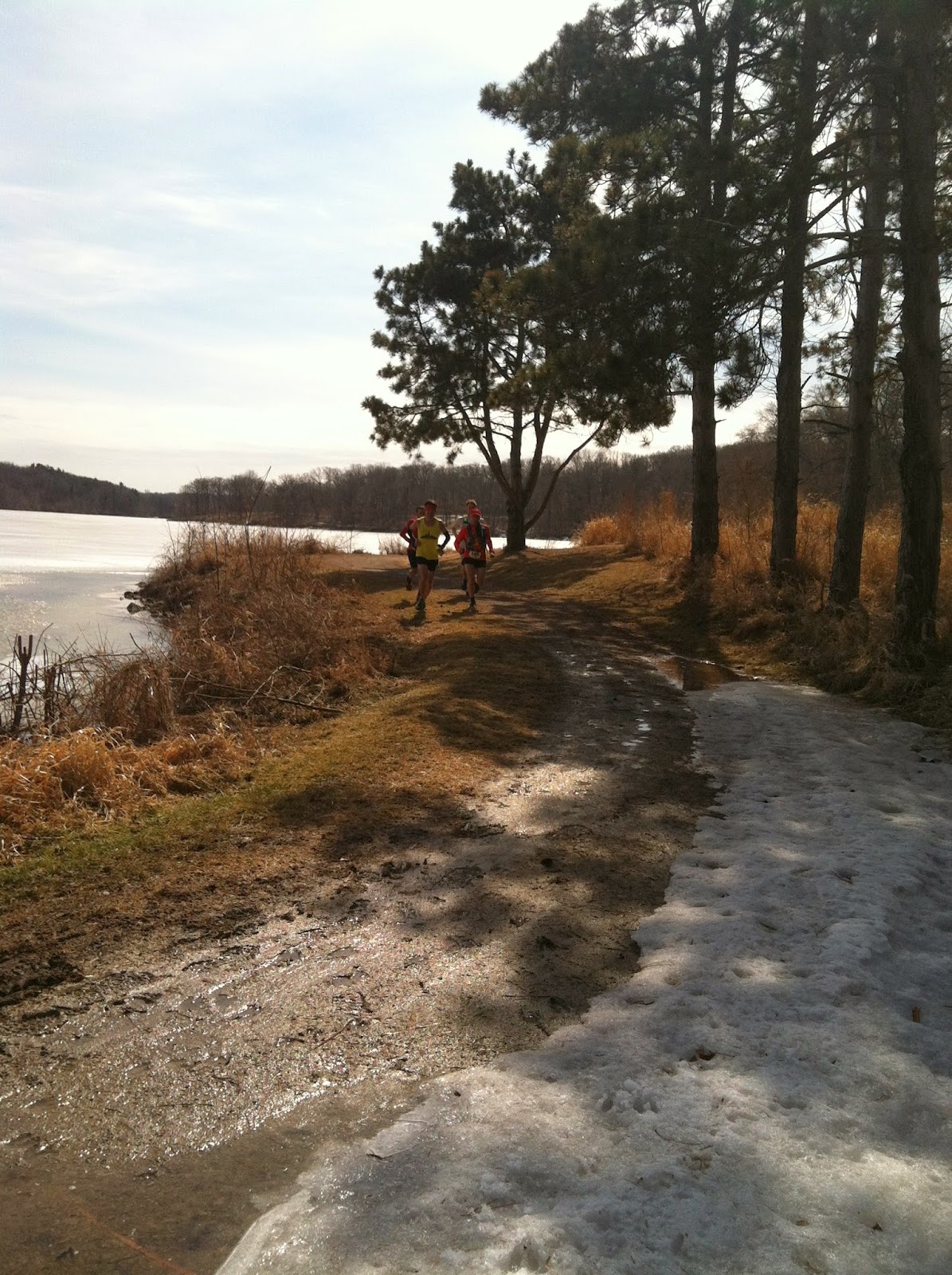 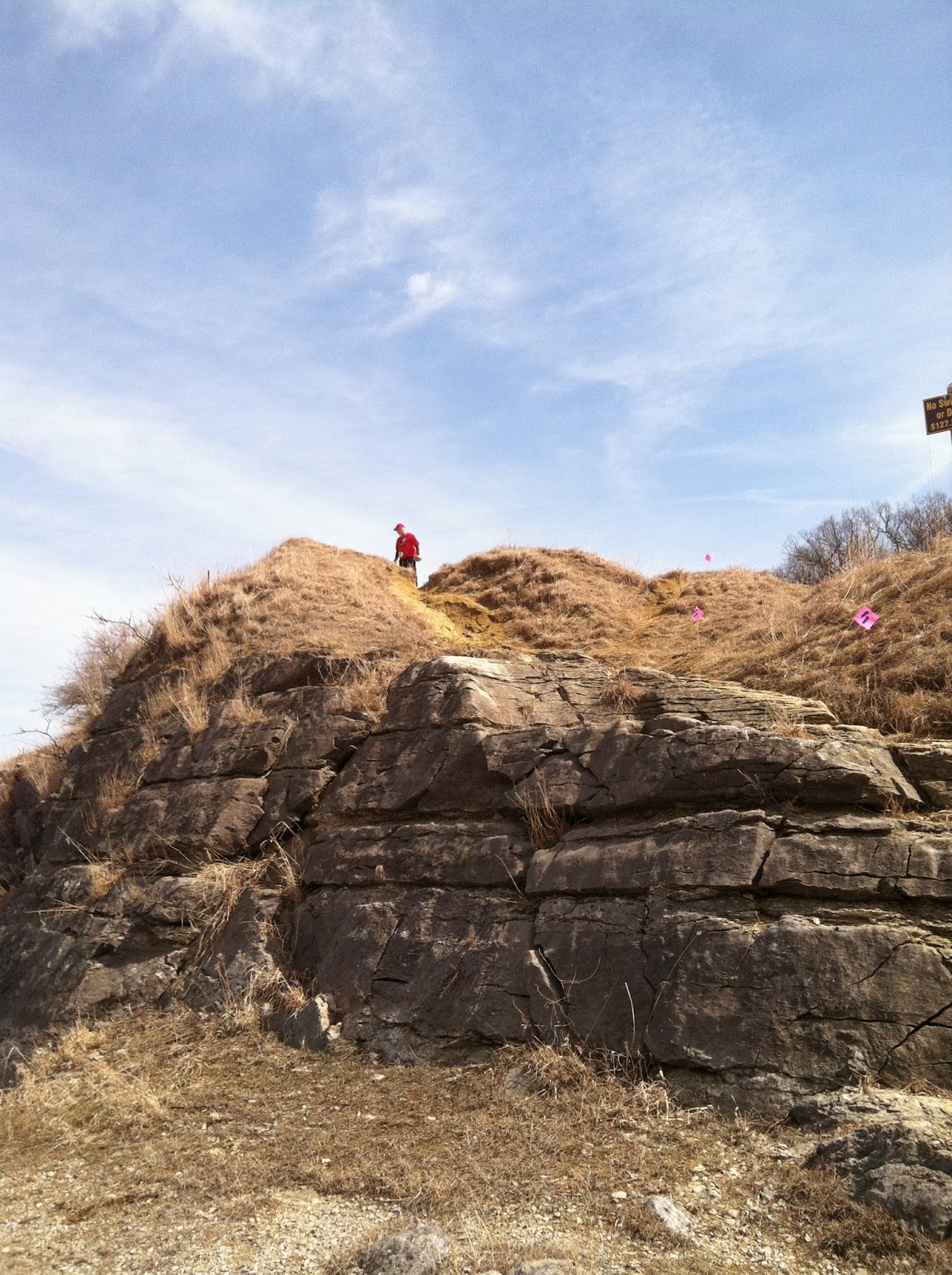 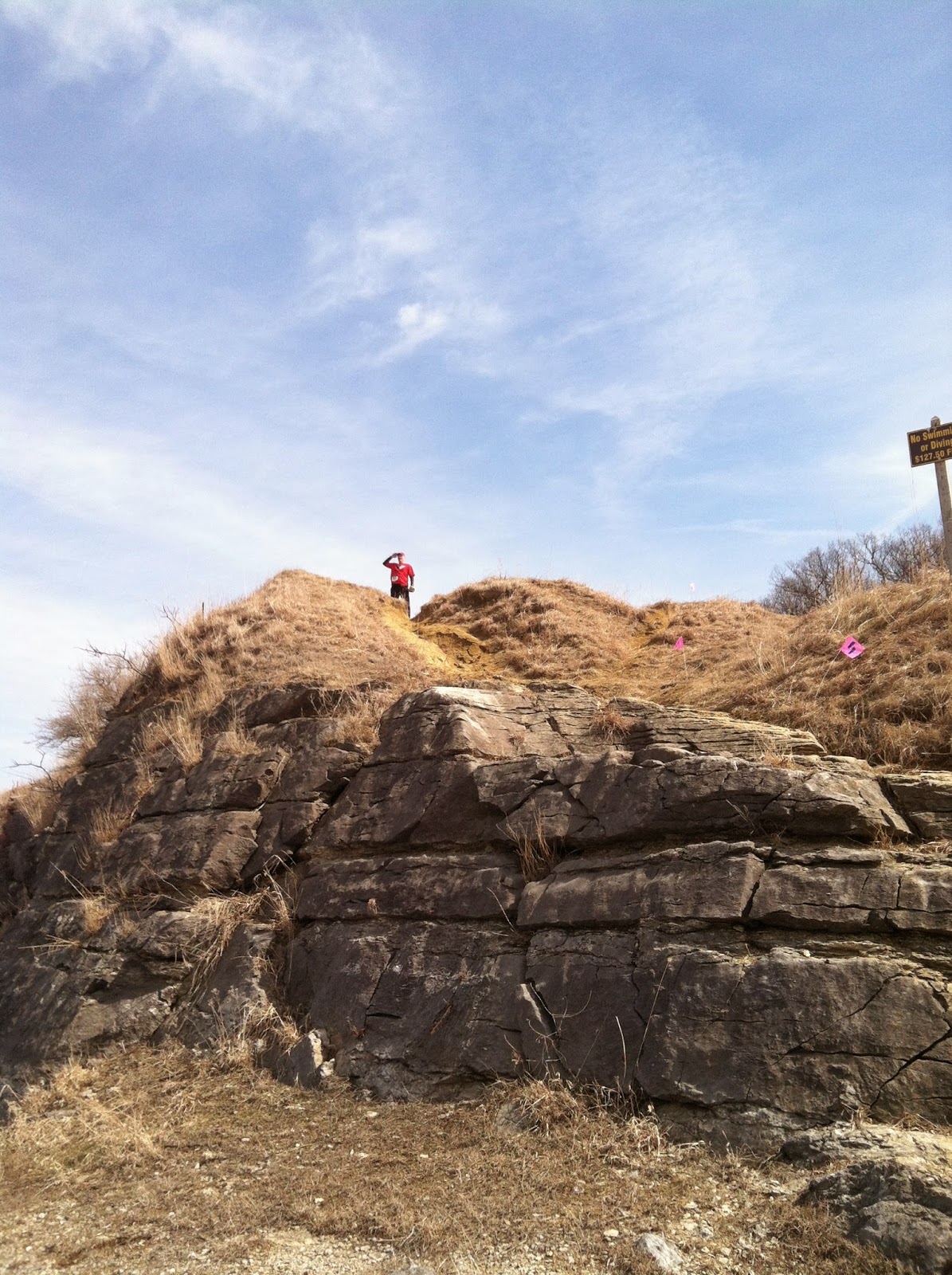 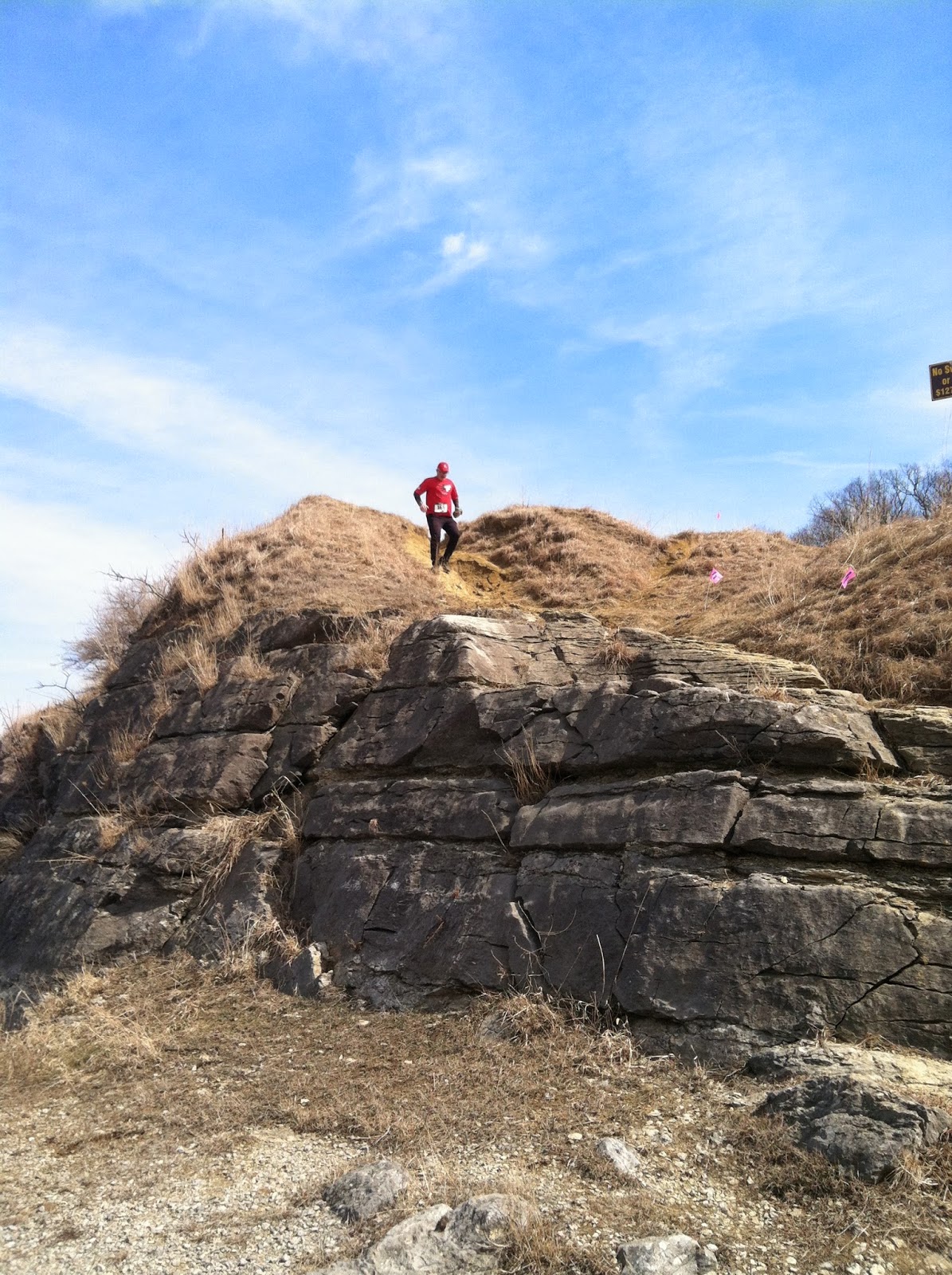 Once I hit the pavement I was able to see some other runners in the distance. By keeping my pace steady and relentlessly moving forward I  passed two of them in the 3.5 miles of highway. When I turned left off the pavement to head back to the start /finish my first issue developed. The trail was muddy,wet and steep. The churning footsteps of all the 25K runners and the other 50K runners ahead of me had made the trail into a cow pasture. Try running uphill in ankle deep cold mud and you know what I mean. For the first time, since the Dances with Dirt 50 mile in 2011, my right leg started cramping. I felt a small twinge of despair. But I gritted my teeth and started walking. Eventually the cramps subsided and I was able to start running again. Once I got back to the start/finish I stopped briefly at the aid station and headed out on a short 3 mile out and back section. This trail headed to the spillway from the other side. It also turned out to be an asskicker. Up and down and MUDDY. But I made it through and back to the start of my first 3 mile finishing loop. I would have to cover this loop twice in the next 6 miles. The loop started uphill, hit some pavement, hit a long snowy part and then through and around a steep muddy slippery ravine. 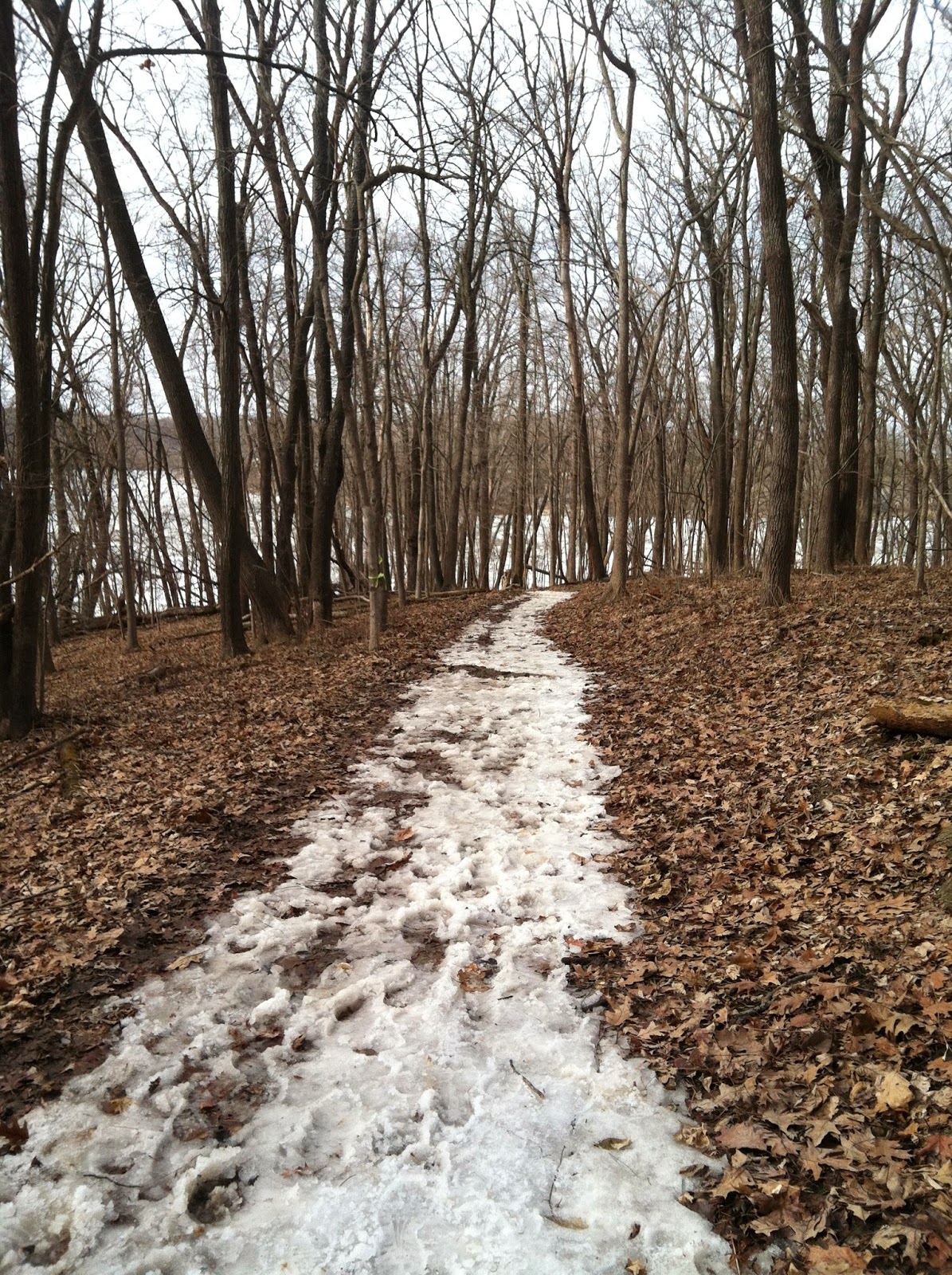 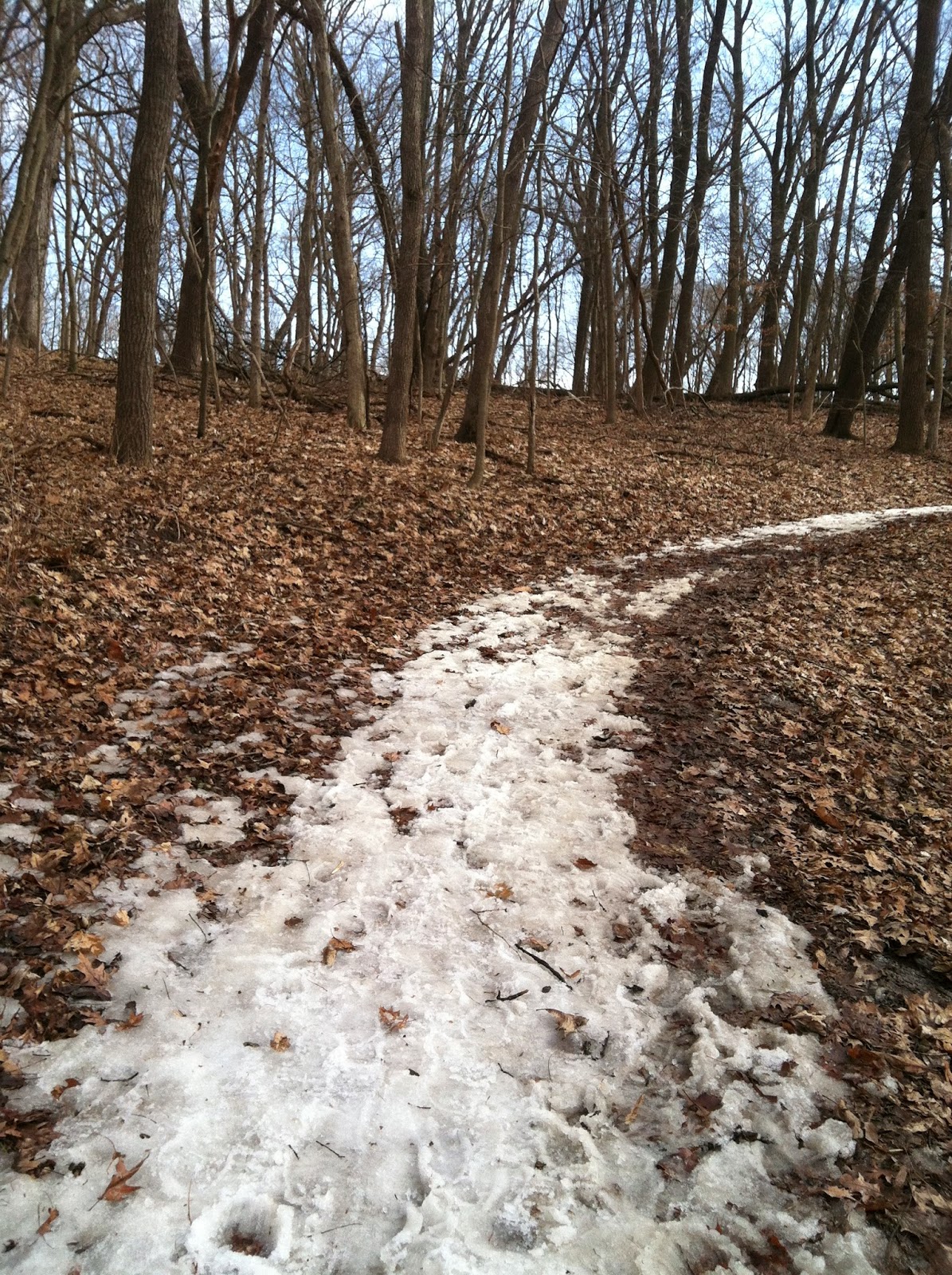 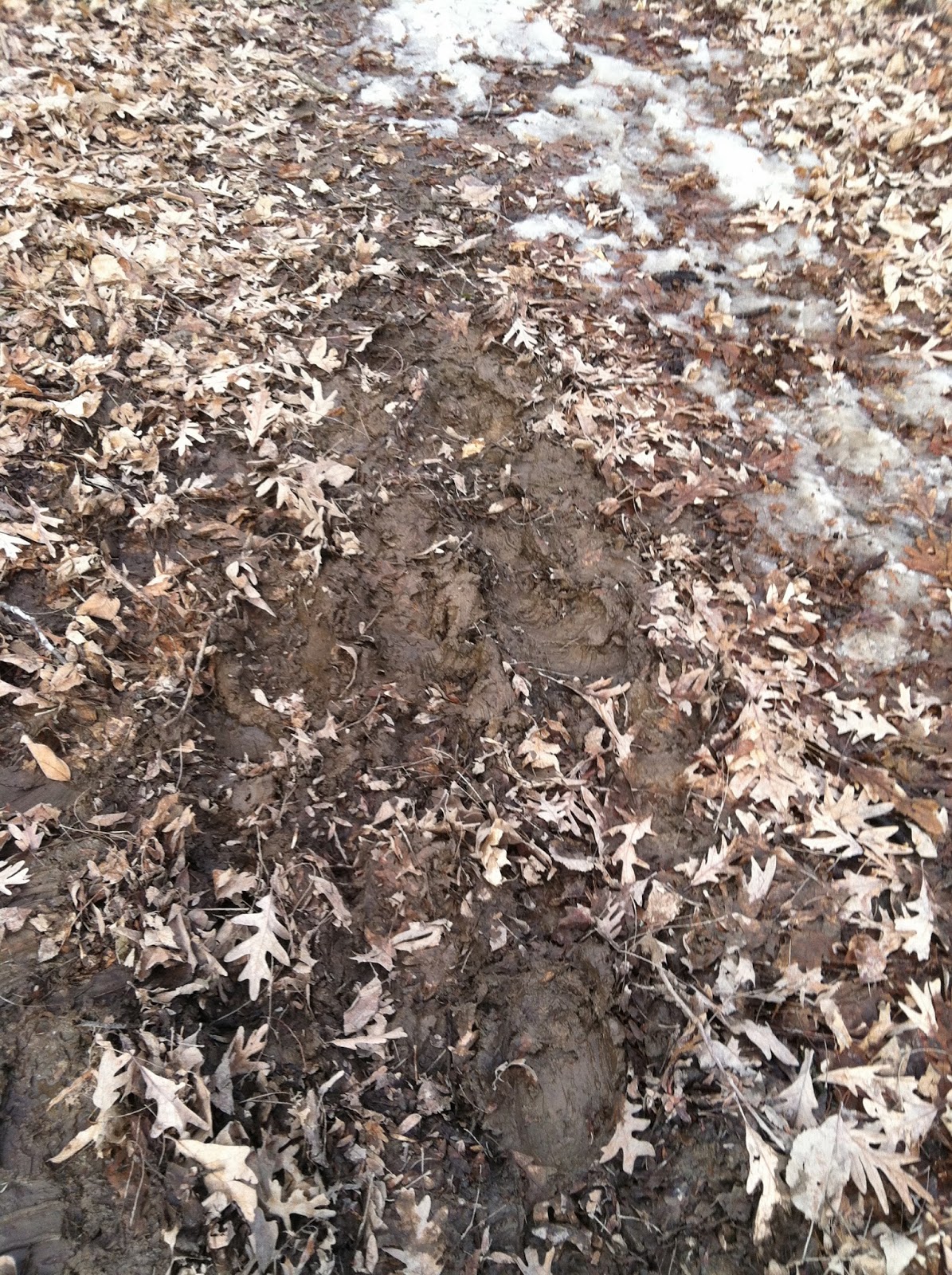 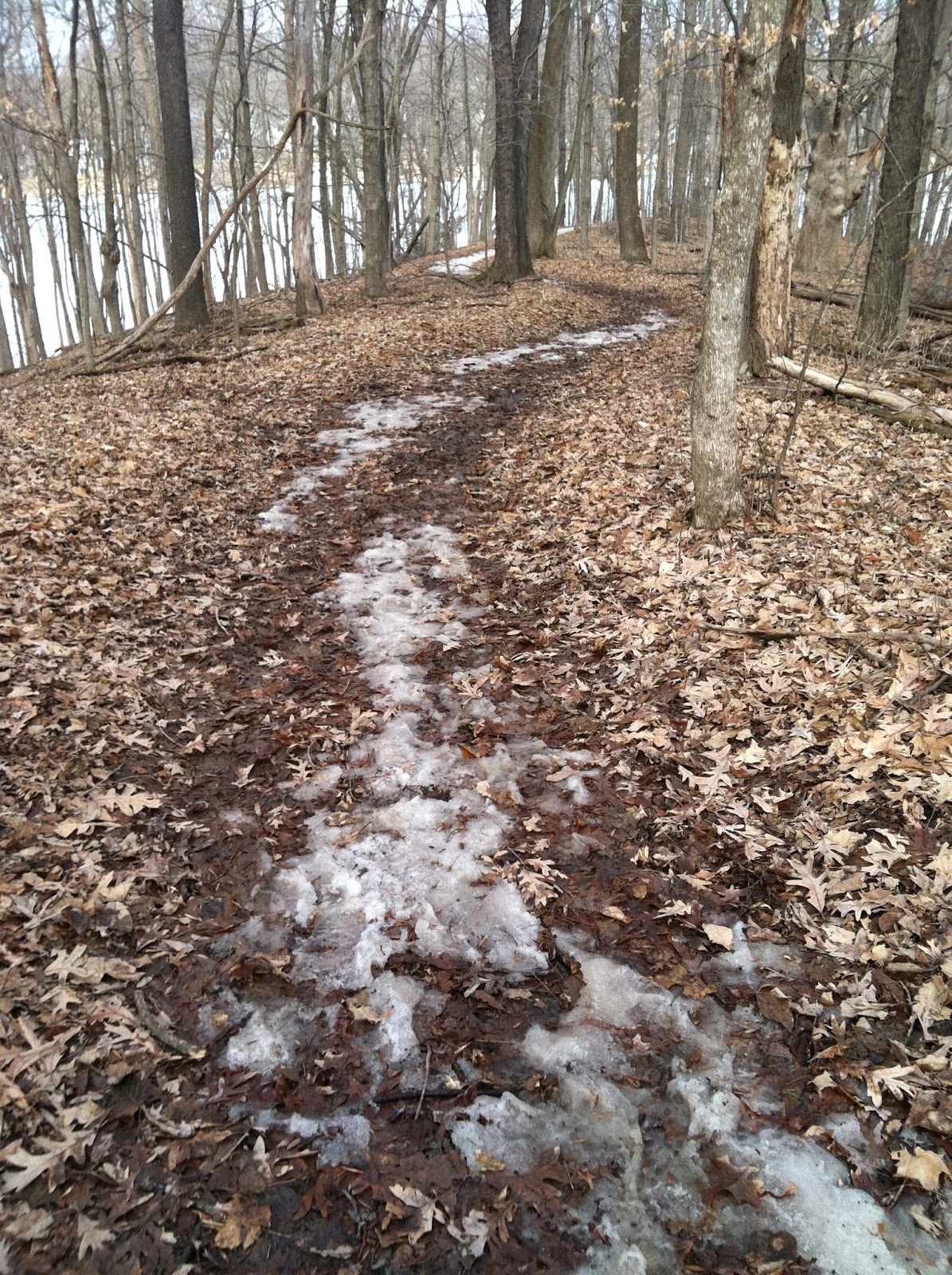 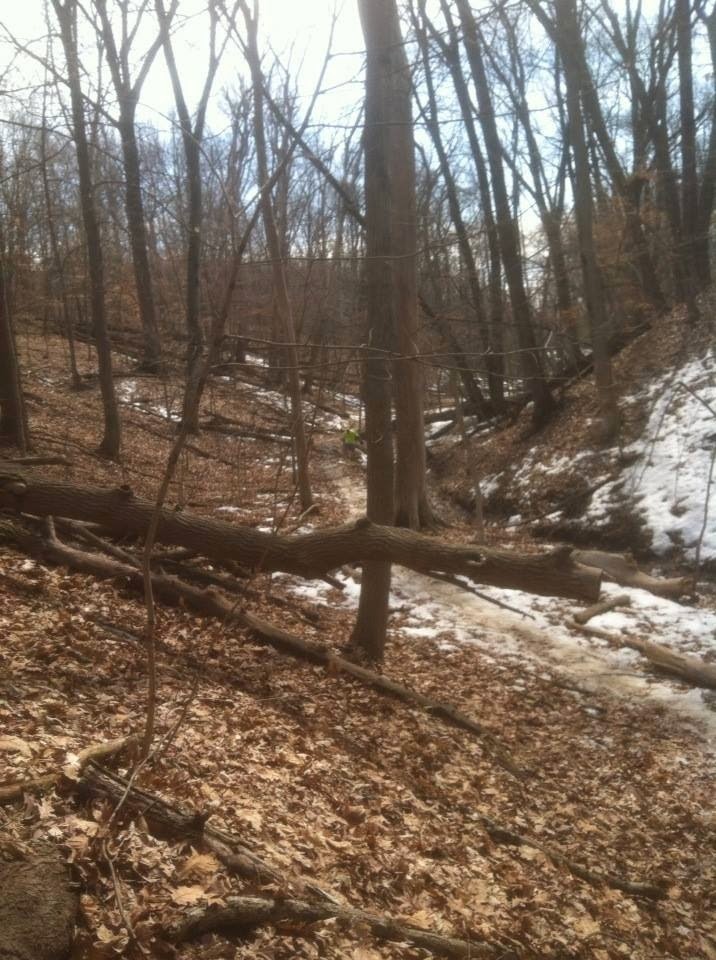 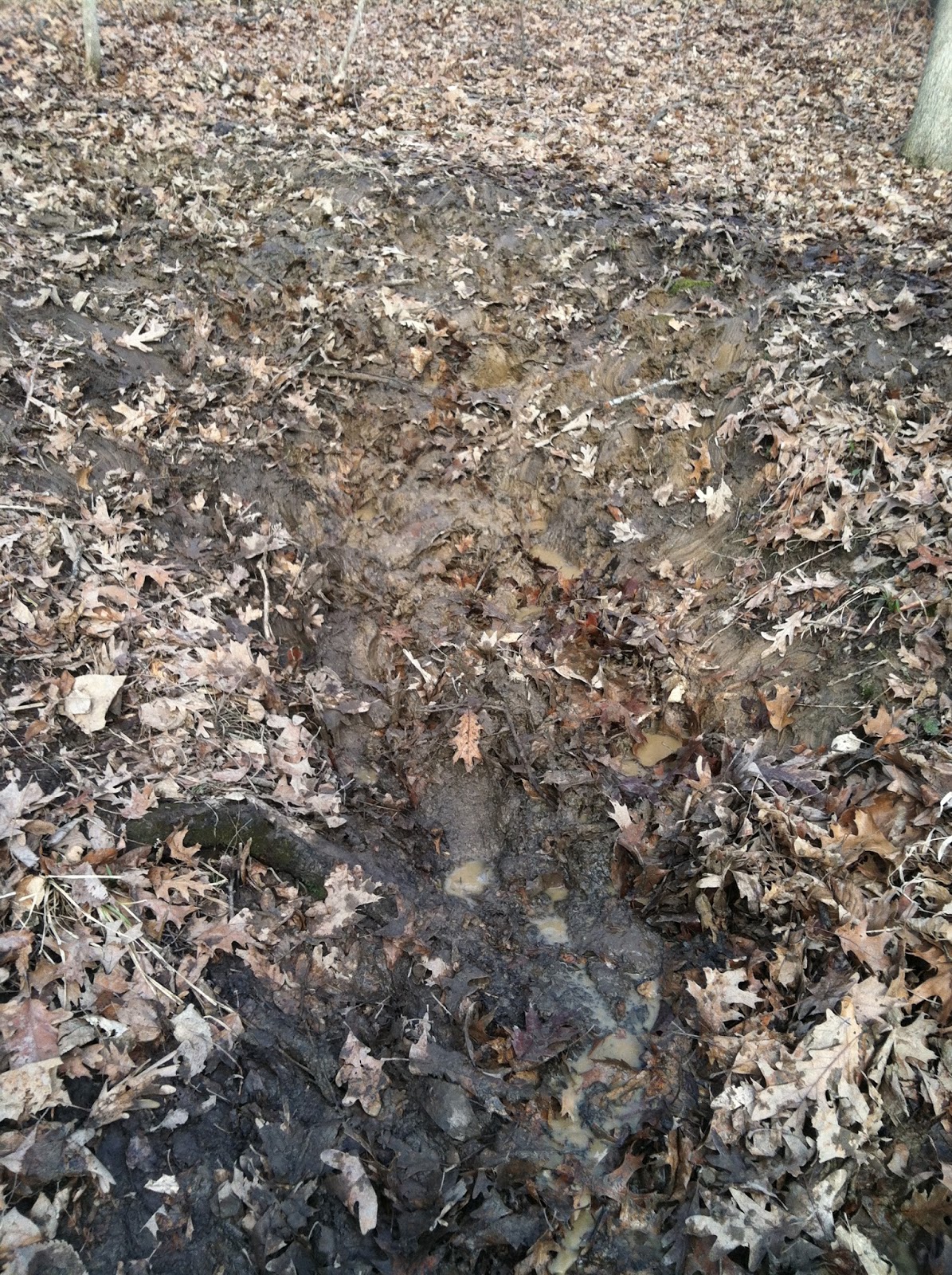 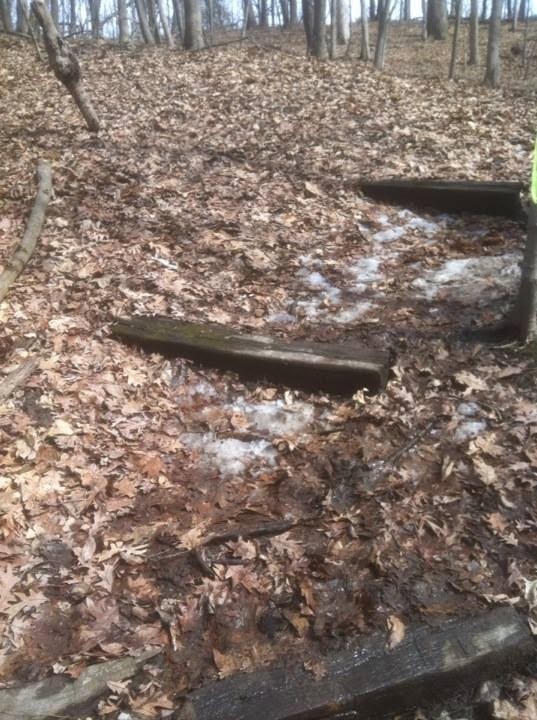 Its hard to capture all the emotion of this section. At times I was tired and slogging and other times I was full of energy and motivated.  I also experienced a cramping recurrence. This time in my left leg. But I walked that off as well. Towards the end of the last loop I was loudly singing for anyone to hear my version of Whisky in a Jar by Metallica. This seems to be a habit for me in ultras. Some people sing in the shower I sing in the woods.  It took me 2.5 hours to cover the last 9 miles. But I had a great race. I experienced all the ultra things. I was gloriously wet, cold, tired and hungry. I was back and my streak continues!!! 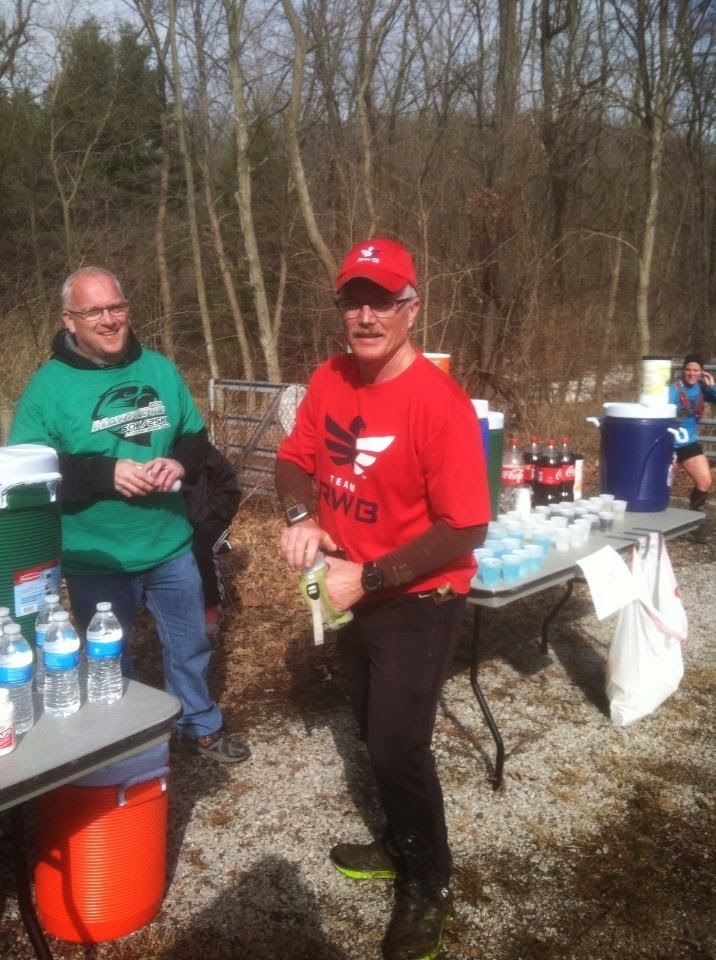