I originally was going to ignore this as just another example of internet idiocy. But then I thought it would be a good opportunity to highlight the continued cultural divide between the current military and the general public.

I believe this gentleman may have a different opinion if he actual interacted with and knew more military members. I am just guessing he has no contact with any current or former members on a personal level. His comments are an example of what we get when .045% of our population decides to serve.

I am against a draft. However the widening divide between civilians in military are a result of lack of common ground. Lack of common experience. Organizations like Team RWB and Team Rubicon are making great strides in connecting the community with veterans through physical and social activity.

I am a free speech advocate however it doesn't mean I don't think he shouldn't be fired for misusing his position. Teachers should be politically neutral. Free speech allows you to say what you want but you should be ready to deal with the consequences.

Finally my 4 college degrees including a Masters disagree with your comments sir.
Posted by mikemac356 at 08:15 No comments:

As a lot of you know I have been studying Brazilian Jiu Jitsu for the last 20 months or so. Brazilian Jiu Jitsu is a martial art and combat sport system that focuses on grappling and ground fighting. I try to attend practice at least 2 times a week, sometimes I get more sometimes less. Yesterday I was fortunate to attend a 3 hour seminar taught by one of the founders of our school. Xande Ribiero is a multi time World Champion in both the Gi and No Gi disciplines. I learned a lot and had a great workout. 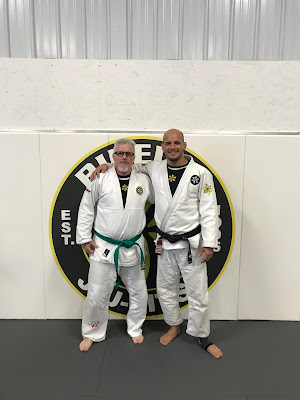 Lots of great info in this episode
Posted by mikemac356 at 15:14 No comments: