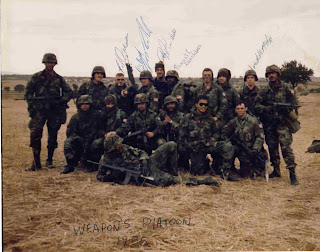 In 1985 I was a salty know it all member of the "Spec 4" Mafia assigned to Weapons Platoon B Company 1st Battalion 325th Airborne Infantry Regiment 82nd Airborne Division Ft. Bragg NC. I was assigned as the gunner for the main gun of our 81 mm mortar section, a somewhat prestigious position given to the lower enlisted guy who had managed to stick around the longest without getting chaptered out. The All American Division as the 82nd is known, was and is the only Division size paratroop unit left in the US Army. The army of the 1980's was different than today's military. It was struggling to make a cohesive professional force as it also transitioned from the draftee army of the 1970's to an all volunteer army. Times were a little turbulent, like the summer we had to walk to every training exercise closer than 12 miles because the military had run out of money for fuel.
Some of my good friends were Roger, Richard, Don (Duck), B.J., Bobby (The Ragin Cajun) , Mark,and Ernest T. All of these guys were awesome friends, some got out of the military and I lost touch, some like Duck who proceeded me into Special Forces made the military a career like I did.They say you never forget your first and Weapons platoon was my first military unit and I will never forget the characters that belonged to it.

In 1985 our unit was deployed to the European part of Turkey in an Emergency Deployment Readiness exercise called "Display Determination 85." Every platoon provided two soldiers to act as an advance party and I was chosen to be one of those two for our platoon. The other soldier accompanying me was a "newbie" to our platoon named David. Dave had come over from the 4/325 stationed in Vicenza Italy so he was familiar with Europe where my only trip overseas at the time had been to the Sinai Peninsula. The 4/325 would be redesignated the 173rd Airborne Brigade some years later. We departed North Carolina via C141 cargo plane on our way to Turkey and after a long and very boring flight we landed in Istanbul and unloaded our CONEX containers and vehicles for the move farther west. We convoyed west along the highway until we entered a tent city built next to a Turkish Commando base. The Commandos would be participating in our exercise but I never really saw them during our time there. We spent the next two days reconning the drop zone and preparing for the arrival of the rest of our battalion who would make a night mass parachute drop after flying straight from North Carolina.

I was tasked to be the jeep driver for the Drop Zone Safety Officer (DZSO) so at the appointed time and place I was dozing off in the sparsely cushioned seat of an M151 jeep when I heard the unmistakable sound of low flying aircraft. The DZSO was taking wind readings and talking to the lead aircraft via the radio that was on the other seat of the vehicle. The wind reading was 10 knots gusting to 13 knots which was the maximum limit for a static line parachute jump such as the one being attempted. Either way it was a little windy and pitch black. By straining my eyes I could make out the darker outlines of the aircraft against the night sky. Suddenly I saw little green chem lights shooting out the tail of  multiple aircraft as the heavy drop of vehicles and equipment was released prior to the jumpers. These chem lights were attached to the cargo parachutes rigged on this equipment. Heavy drops were normally released at the leading edge of the drop zone so as not to clutter the rest of the landing area for the personnel.

However on this particular night after flying thousands of miles in total darkness and conducting nape of the earth low level flight for 2 hours prior to the jump the Air Force got it a little wrong. The lead sortie of aircraft released their equipment in the center of the drop zone which did two things. Number one it pushed their troops off the edge of the drop zone forcing many of them to land in a water filled canal that was 500 meters from te trailing edge. Number two when the trailing birds adjusted for the error they dropped their troops smack dab on the equipment that had been previously dropped. Factor pitch blackness and high winds into the equation and you had a recipe for disaster. After all jumpers where away we started driving across the drop zone using blackout lights trying to estimate the number of injured and confused paratroopers. Along the way I happened to find a few members of my platoon and they hitched a ride to our platoon assembly area. A few of them like my friend Roger had actually been dragged by their parachutes down the shallow canal like bobsledders on their back. He told me how he struggled to release one of his canopy risers as the water kept flowing over his helmet and into his mouth and nose. After finally releasing the riser he stopped being dragged but he had to retrieve his soaked rucksack and sodden parachute and start navigating to the assembly area. He was especially upset because the disposable camera he had in his ruck was ruined. He was very glad to see us. As dawn approached all individuals were accounted for and we started hearing the war stories and rumors of injuries, things like our battalion commander slamming full force into a large truck that was on the drop zone (this one was true he was sent back home and spent 3 weeks in the hospital) or the guy who landed in some village and was arrested by the local police ( not true).

We moved out on foot and for the next two weeks we walked and walked and walked all over the Turkish countryside lugging our heavy mortar equipment with us. Occasionally we would get a fire mission and we would run some dry fire drills dropping imaginary mortar rounds onto imaginary reference points or objectives. The whole time we conducted the exercise I never knew where we were on the map and it was all I could do to slog through the muddy freshly plowed fields. It was 3 years later when I attended Ranger School when I was taught the importance of keeping all members of your unit informed. I give our platoon leader an F on that little skill. Every night we would set up the guns and sleep beside them, waiting with one ear next to the field telephone for the sound of "Section!!!" which indicated an incoming fire mission.

Eventually we made it back to the tent city for some R and R prior to leaving to go back to the States. The first night in the tents we managed to obtain some Turkish Arak, which is a liquor similar to Sambuka or Raki. If you have never had any of those they are all clear and taste like black licorice and will kick you butt. We mixed this liquor with the dried fruit we pilfered from our first generation Meals Ready to Eat to make a jungle juice par excellance'. After about 2 hours we where howling at the moon and rolling through the bonfire outside the tent. Bobby burned his hand in the fire but we told him to quit his whining and have another canteen cup full of the juice. The next day we all had heads the size of fresh watermelons but we were told we would be getting a cultural tour of Istanbul. This was actually pretty cool, we visited the Grand Mosque and other attractions. I bought a little ivory jewelry box for some reason. I kept the box and 2 years later I gave it to my wife who at the time I hadn't even met. She still has it. Later on that evening we went to the Kervan Seray night club and were treated with a show featuring traditional dancers. We drank a bunch of beer and things were going along well until we reached the beer limit established by the chain of command and also discovered we had been locked into the night club. I guess the muckety mucks didn't want any drunk and testosterone filled paratroops invading downtown Istanbul. Disheartened and half sloshed we used all the money we had left to bribe one of the waiters to provide us with some alcohol. He delivered us ten bottles of the most god awful red house wine I have ever drank. Of course we proceeded to polish those off and the night ended with us doing jump commands and Parachute Landing Falls off the tables of the night club.

The next day we poured ourselves into the planes taking us back home and lifted off for our refuel stop in Madrid Spain. The flight back was no picnic as this was still the Cold War. Our route took us close to the airspace of some Eastern Block countries and our pilot did some pretty nifty evasive manuevers when he reported we where being shadowed by two unknown MIG Aircraft. I expected a air to air missle to come through the fuselage at any moment. Eventually we landed in Madrid however and had a 4 hour layover that was prolonged when after takeoff our landing gear woudl not retract and we had to make an emergency landing back at the airport. Rumor had it the Security Police had the bomb sniffing dogs out giving the plane a once over.Finally we landed back at Pope Air Force Base and Fort Bragg. I was happy to be back in the States.

Post Script: As I write this blog entry it has been one year since my good friend Roger was killed in a bicycle accident. Airborne All the way
Posted by mikemac356 at 20:27