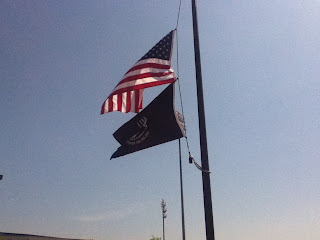 Remember those that have went before and those still to come. Thank you to all those that gave the ultimate sacrifice and those that still guard the gates of freedom.
Here is my Memorial Day post from last year, not much more I can say:
http://mikemac356.blogspot.com/2010/05/memorial-day-me-and-jerry.html
Posted by mikemac356 at 19:49 No comments:

After running the half marathon last year, see this post http://mikemac356.blogspot.com/2010/05/fatslow-distance.html and setting a personal record I decided to make this marathon one of the two I will be running this year.

I couldn't have picked a worse weekend, it was 40-50 degrees and pouring rain all day Saturday. After driving the 3 hours to Rockford, I picked up my race packet and chilled in the hotel room watching the latest episode of Doctor Who on Justin.TV with the J-Man. Boochie took a nap until it was time to eat at Buffalo Wild Wings with her significant other and his parents. We had a pleasant dinner and she went over to his house to hang out while me an J-man returned to the hotel. Me being me, I laid out all my gear for inspection and prepped for the race by drinking lots of water and eating some ibuprofen. Between the strange bed,noises, and pre-race jitters I didn't actually fall asleep until midnight. The Boochie came back and I was awake again at 0100. So prior to the race I got about 4.5 hours of sleep as the alarm was set for 0530.

We woke bright and early and packed all our gear into the car in case misfortune would happen and we didn't make it back to the hotel before the 1300 checkout window. Surprisingly all the kids got up and even Boochie's boy friend arrived on time, so we were out the door by 0600. The race was to start at 0700 and even though we had some trouble figuring out where to park, I was still on line at the porto potties for the pre-race dehydration by 0630.Weather was surprisingly similar to last year. Even though the rain had stopped it was windy,overcast and about 50 degrees.

This race had pace groups similar to the Quad Cities Marathon, and I had such a good experience last time I decided to utilize a pacer this time as well. I was using this race as a training run for a longer 50 mile run I will be doing in July so I wanted to beat my pace from the Quad Cities but not kill myself. I had run a 4:44 in the Quad Cities so I decided to go with the 4:30 pace group for this adventure. That works out to 10:18 minutes per mile over the 26.2 mile course.

A few minutes prior to race start the played the National Anthem and then the gun sounded and we were off!! As we crossed the start line I hit my Garmin Forerunner GPS and fell in behind the pacer. Her name was Val and she was from PA. Over the course of the marathon I was to find out she had run about 10 marathons and many ultramarathons. As usual the first 5 miles were pretty easy, the pace felt slow but I knew it would get harder as we went. The only bother was we were headed directly into a pretty stiff wind. So stiff I had to turn my hat backwards to keep it from blowing away. They had changed the course slightly from last year but I did recognize several of the landmarks from the previous race.

There were aid stations and/or water stops at every mile marker and most also had more porto potties. This was good as I had to utilize them every mile for the first half of the race. Approximately mile 6 we headed back towards the start line and of course now we had a tailwind which was nice. The course wound along a bike path by the river which was very scenic. I was still feeling very strong at this point which was about the 10-12 mile mark.

We emerged from the bike path to hit the city streets again. Running about another .75 miles the marathon and the half marathon courses split. We said goodbye to all the half marathoners that had been running with us as we turned left up a steep hill. At the top of the hill we took a right and crossed over our previous route and headed west back through downtown. At this point the course would cross back over itself several times and we would hit some of the same roads we had run on previously.

Miles 13-16 were pretty uneventful as I still felt good. There were 4 of us counting the pacer in our group and we were all still holding conversations although the pauses were getting longer. We had noticed and commented on the fact that the mile markers seemed slightly off from what our Garmins were reading. Several of us had them and they all showed us about .25-.30 miles ahead of the official mileage.Val apologized for any discrepancy but she reminded us she had to pace to the mile markers and could not rely on the Garmins. She mentioned maybe we would be banking some mileage for the end.

Approximately mile 18 we lost our first casualty as a lady whose name I didn't catch dropped back and started walking. A little later on about mile 20 Vas, a gentleman who said he worked in a hospital and had recently lost 40 pounds started to fade and eventually we lost him. I saw him at the end and he did finish somewhere around 5 hours. So at that point it was myself,Val the pacer and another young lady from Muncie Indiana. She was running her second marathon.

Mile 22-25 were killer as usual. I think it must be some unwritten code amongst race directors that the last miles of a marathon must be in the loneliest,most godforsaken area available. Devoid of any human contact or encouragement, we ran down a bike path through a forested park. Conversation was at a minimum and I for one was concentrating on my pace and breathing. As noted earlier the mile markers seemed to be a little off. What this did was effectively put us at a faster pace than what we had planned. Approximately mile 24 I started to fade myself. it was requiring increased effort to maintain the same pace. It was at this point I decided I needed to run my own race. I reasoned this was a training run and I could still finish under my previous time for the Quad Cities marathon. So I slowed my pace slightly into something more comfortable. The pace group slowly widened the gap until they were still in sight but out of reach.

At mile 25 some joker decided that it would be funny to put a large hill on the course. I powered up this hill with the finish line in sight and took a left to head back down the hill. It was at this point I saw Val again. She had actually slowed down as she discovered what we had suspected, which was we were ahead of our goal pace. I caught up with her and as we rounded the last curve I saw my kids piling out of our car. They were carrying a the big pink sign they had constructed which said "GO DAD GO." They got an "A" for effort but I told them they needed a little more practice as a support crew. They tried to keep up with us but Boochie stopped because she was laughing so hard .Val and myself ran across the finish line together in 4 hours 29 minutes and 50 seconds.

All in all this marathon was a good time and a success. Not sure I will do it again next year as I want to try some different events. But you never know it might be a yearly event. Training for my Ultra starts tomorrow!!!