I have been remiss in my race reporting. It just seems like I say the same things over and over. So let me briefly recap each race I have run in the last few weeks

Beverly Park Trail Run-Snowy,local and fun. I wore my yaktrax extremes and I am glad I did. Took some Go Pro video which I will post later. Good times 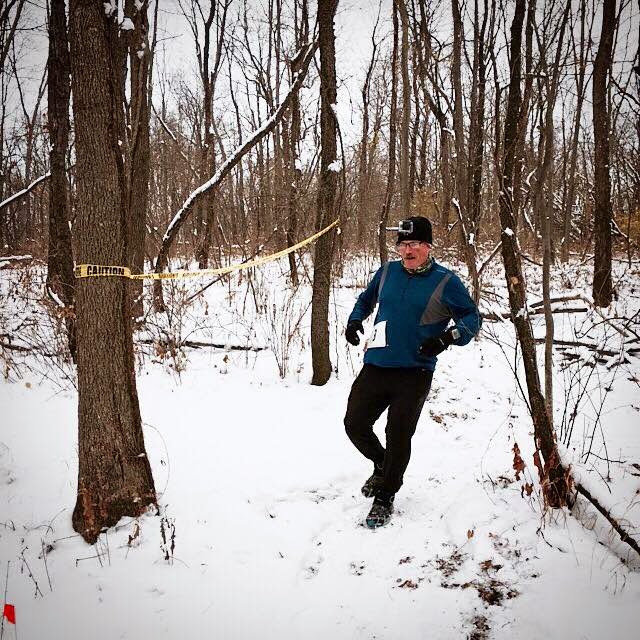 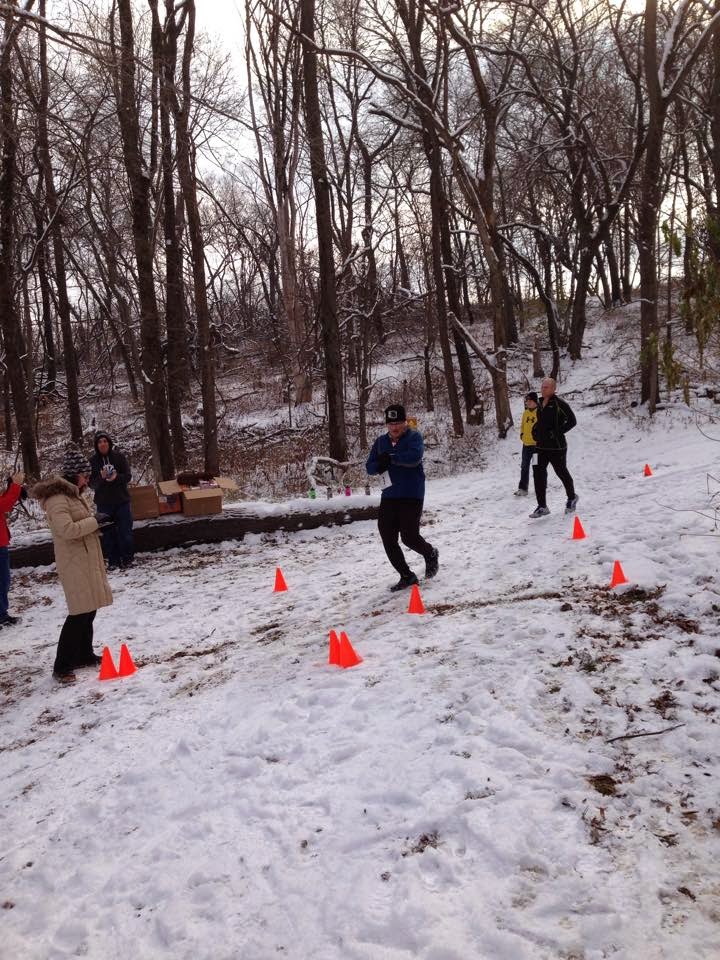 Living History Farms Off Road Race- My first running of this. It was fun and crazy. Lots of runners and mud and costumes and water crossings. I ran steady but not too hard. I will run it again

SurvivorCross_ This was a cyclocross race that was held on the same course as the LHF race about 2 hours later. I registered on a whim, not having ridden a bike race in a few years. it was the most fun I have had in awhile. Muddy and same water crossings. Much harder on a bike. And trying to get that bike up some of those hills GOOD LORD!!!! Also good times!! 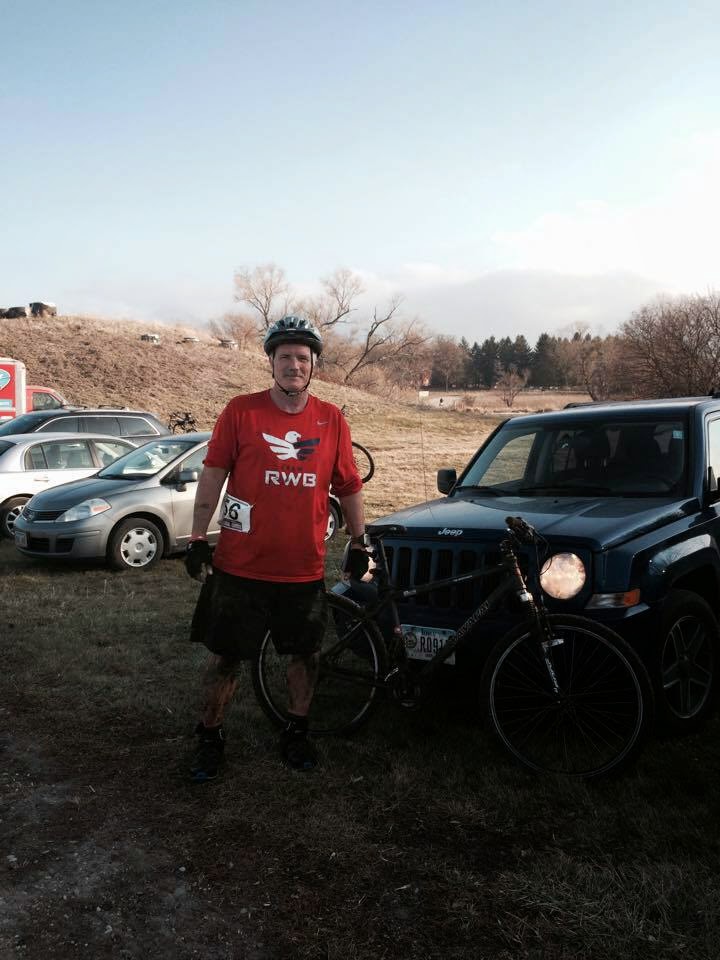 Late addition to this race report. After I posted about the other races I ran this race on a whim. I had raced it 2 years ago and it was fun. I like this race because it is small. This year about 20 folks. And the extreme part is because there is no trail or road. You literally just run through the woods,ditches, fields, creeks, md etc. This year he course was a little longer (almost 4 miles) and there was a lot more water. We had to cross two waist to chest deep streams at an ambient air temperature of about 38 degrees. Was a great muddy,wet and muddy race. I came in about 6-7 minutes slower than my previous running of this race due to the longer length and being a less fit than 2 years ago. However good news was I still came in 4th place just like 2 years ago. And I won my age group due to the magic of birthdays. Good race I will do it again.

Started out to run 50 miles but called it a day at 50K. Still good enough for 2nd in the NCTS Masters Division.
https://docs.google.com/spreadsheets/d/tg1pXoku2ZZpucIHwyWcFwg/htmlview?pli=1 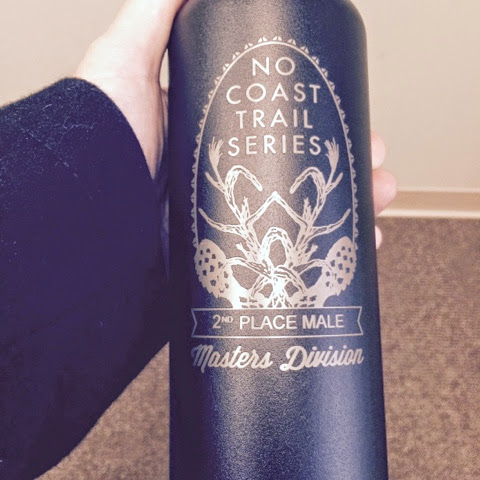 I was talking to one of our salesman at work today. He was in my office where on the walls I have a few  pictures and memorabilia of my time in service. He mentioned he had been in for 19 months, 13 of which he spent as a medic in Vietnam. We talked and laughed about some common Army things that span the generations. I mentioned I was involved in a Veterans Service Organization called Team Red White and Blue. I explained our mission and then he said something that makes me sad. He told me when he got back from Vietnam he tried to join the VFW and they wouldn't let him because Vietnam was not a "real" war. He was treated poorly by the very people that should have embraced him..other veterans. Recently the National Commander of the VFW sent out this letter.
VFW NATIONAL COMMANDER PUTS POSTS ON NOTICE
Below is a message from VFW National Commander John W. Stroud:
I am extremely disturbed by the recurring reports from the field as well as the media’s portrayal of the VFW as an organization that is comprised of old and out of touch veterans who would rather drink in a dimly lit canteen than open their doors to our younger veterans. The VFW’s mission is far too important; our objectives and causes for which we work far too critical; and the current situation of the veteran population far too dire to let the negativity of a few divide us and dilute our efforts. We must empower the younger veterans to be forces of change within our organization while lending them the institutional knowledge to be effective leaders for future generations of veterans.
The fact remains that the stereotypical, dingy, dark and smoke filled VFW Post and canteen do exist, but they have no benefit to our organization, provide no aid to our mission nor to the veterans we strive to help and serve. These Posts are in the minority of our organization, but in order to shift the paradigm we must challenge every member to hold their Post accountable. It’s time for our membership to be emboldened into action and to push their Posts to strive for the high ideals that the Veterans of Foreign Wars of the United States was founded upon.
Accordingly, I am charging my current Department VFW Commanders to be advocates of change and to challenge the officers of the subordinate units within their command to be more than officers —  challenge them to be leaders cognizant of the current challenges today’s veterans face. To do this, our VFW Posts must change their operational tactics to better reflect the modern crises younger veterans are facing on their new “battlefield” – the homefront.
For those members and Posts who would rather serve themselves than the countless veterans who are in need, remind them that this organization exists for the benefit of all veterans rather than those of an entitled few. I want to make it clear that I will willingly provide my complete support to any of my Department Commanders who move to shut down any Post, or remove from our leadership rolls, anyone that is not committed to the goals of the organization.  They simply don’t belong here. The need is too great for a dynamic and modern VFW that can continue to advocate and respond unhesitatingly to the needs of all veterans in the 21st century and beyond.  To do less, would be an unconscionable betrayal of our responsibilities as Americans and as veterans.
John W. Stroud
VFW National Commander
I am a life member of the VFW but I no longer attend my local meetings because I too found this propensity to talk and not act. Surprisingly the very veterans, Vietnam Veterans, that were snubbed are now the majority members and hold most of the leadership positions. Let us hope Commander Stroud is successful in his endeavor to welcome our younger veterans. Every VSO needs to evolve to stay engaged and relevant. To any veteran that was ever ignored or made to feel their service was not valued or somehow less than anothers I say Thank You For Your Service!
Posted by mikemac356 at 21:20 No comments:

Forgot to post my race report. Ran this race again on 19 October right around 5:07.  4th(?) time running this marathon and first time running the entire way with a 3X5 foot US flag. I ran this to raise awareness for Team RWB with another Chapter Captain. We had a large Team RWB turnout. Check out the website www.teamrwb.org 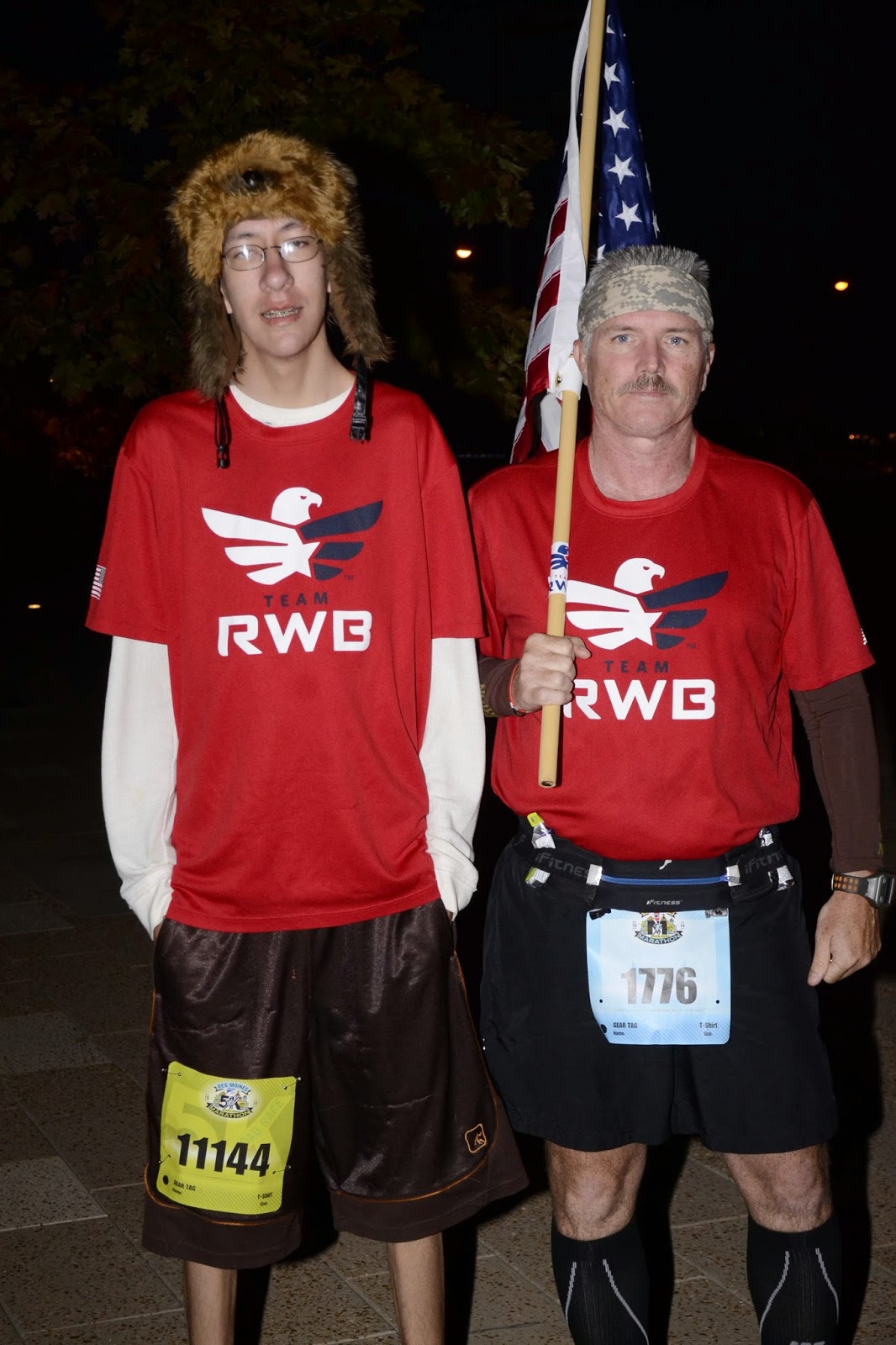 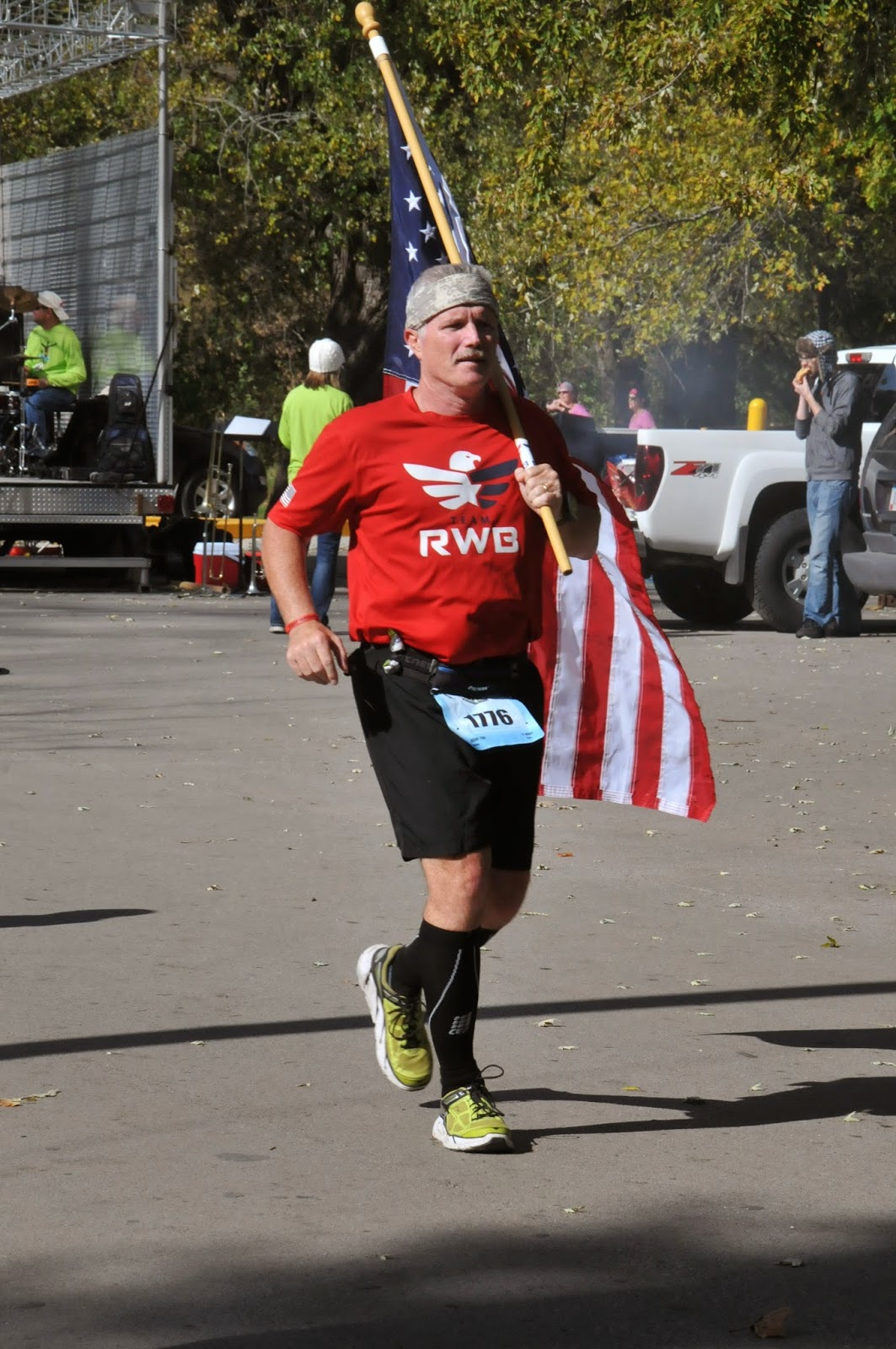 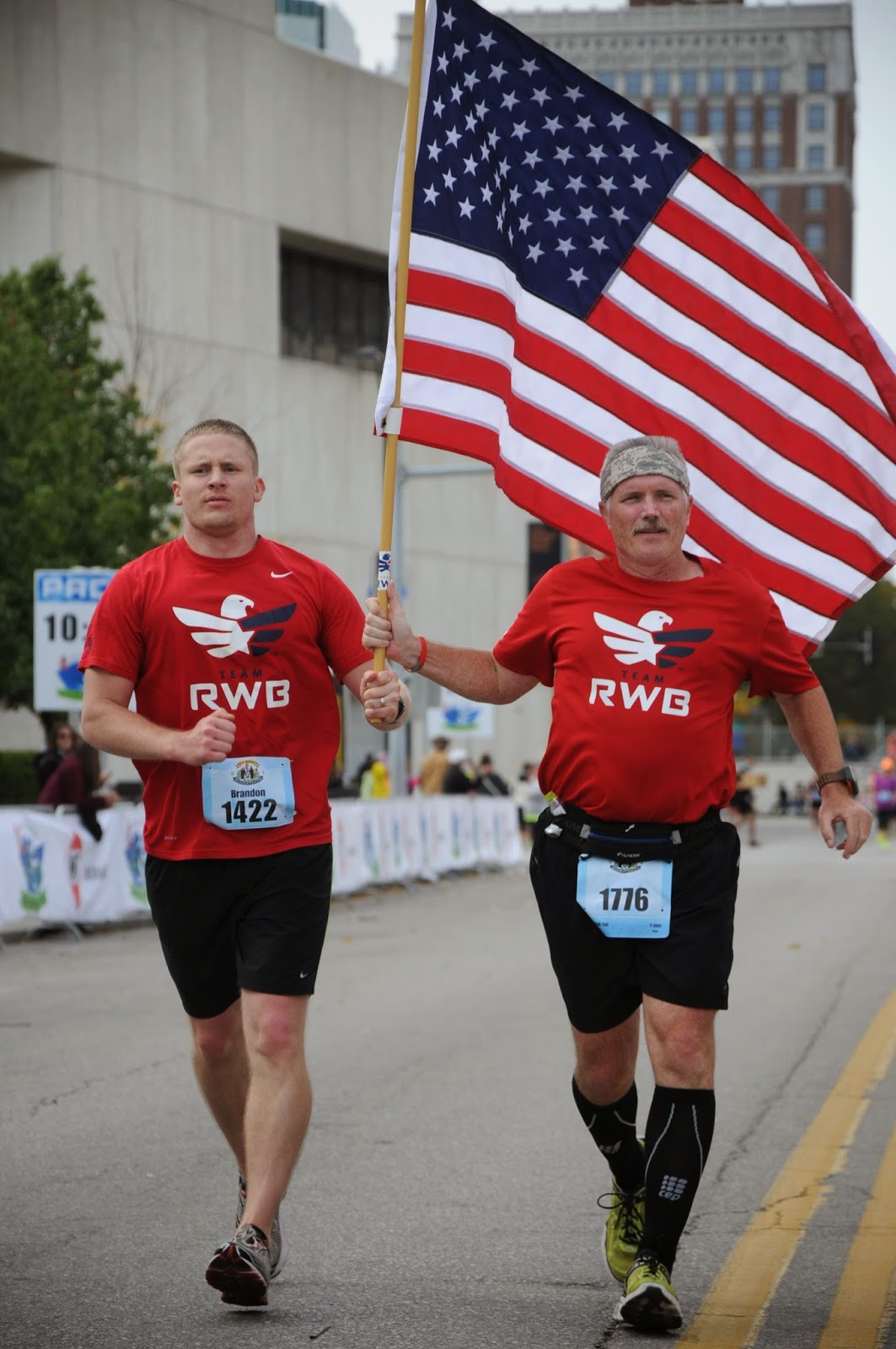 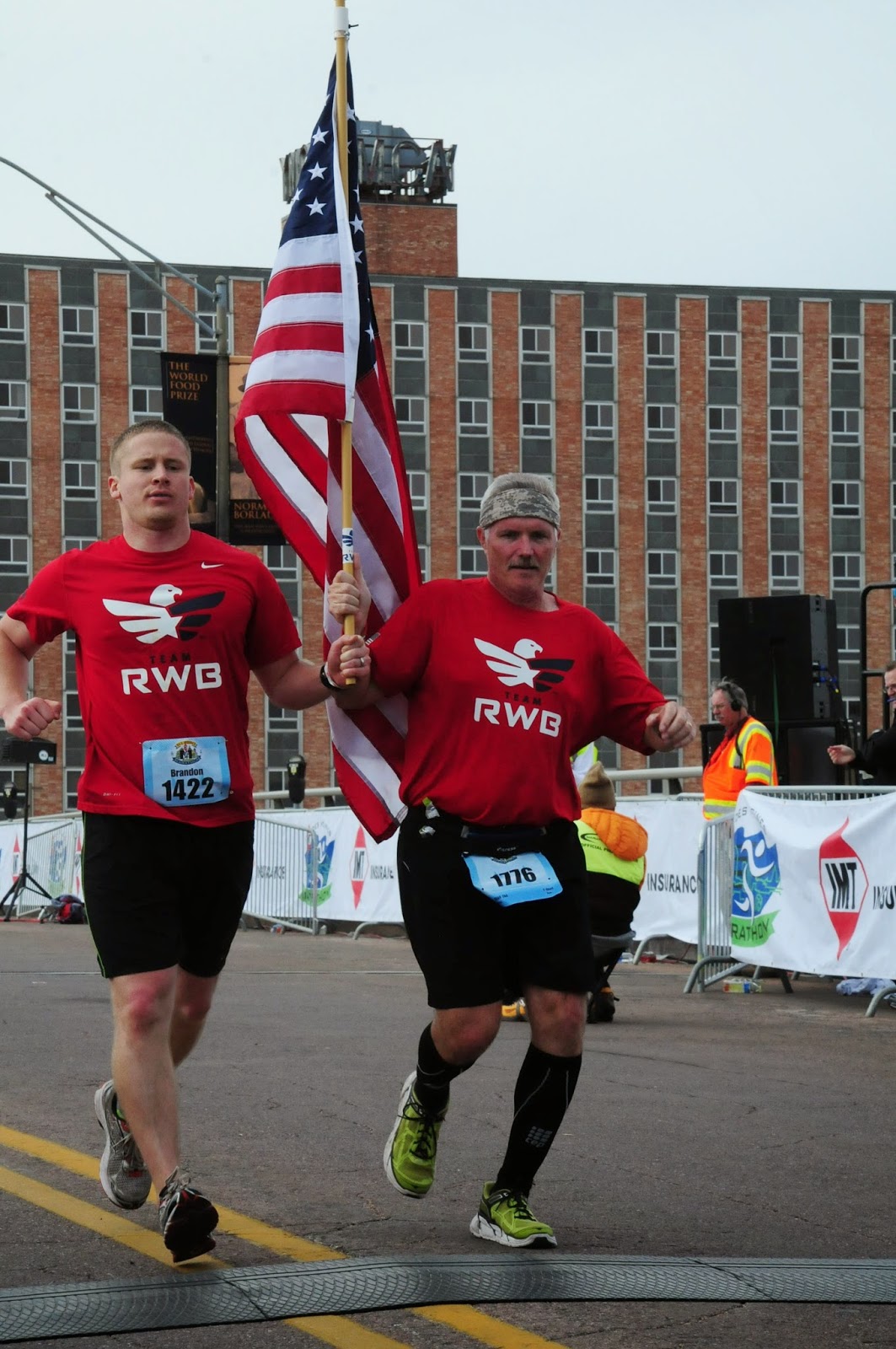 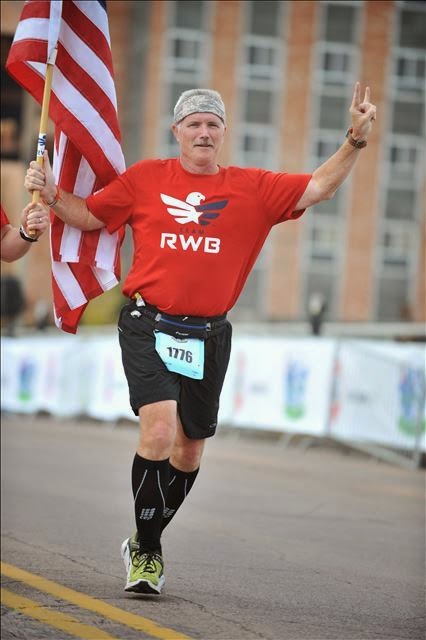 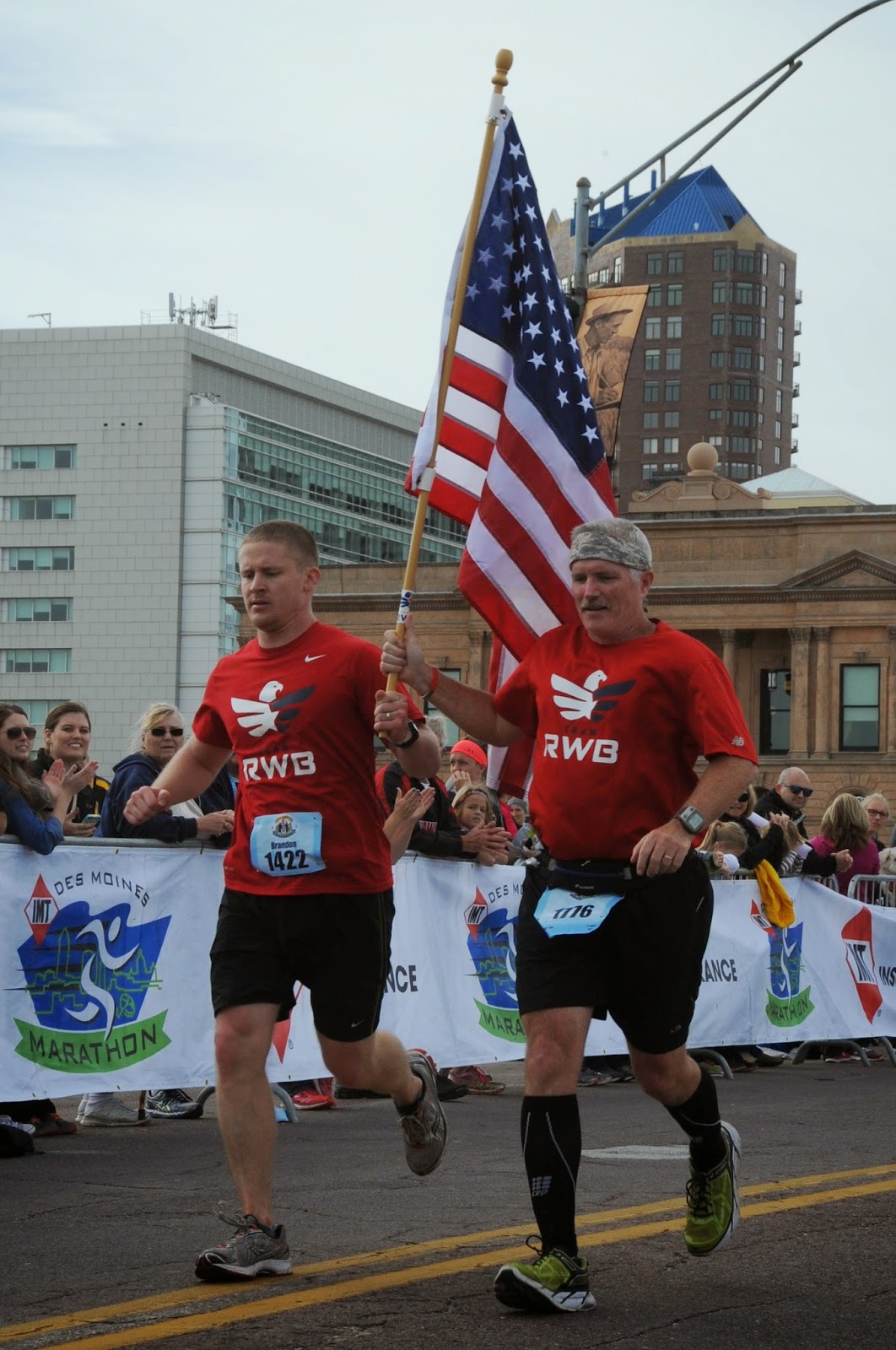 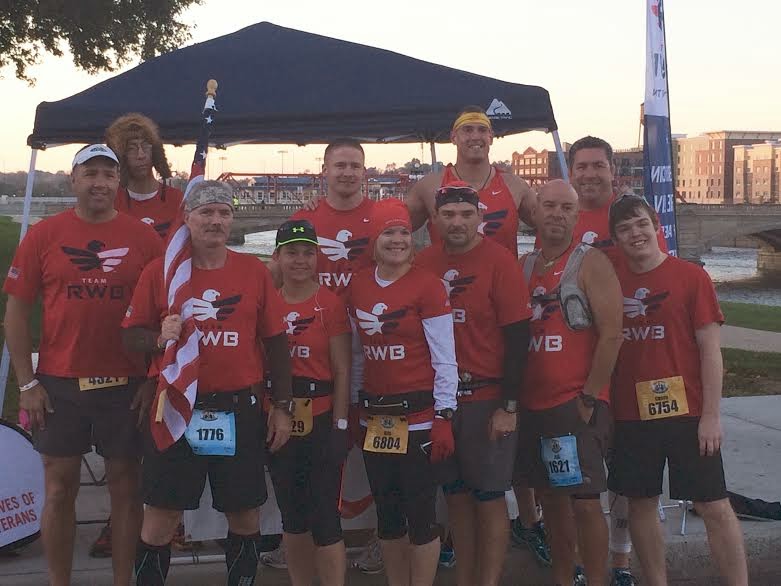 Hitler reacts to being questioned about his SF service

I made this video last week after a gun shop employee and National Guardsman interrogated me over some patches on my range bag. Douche of the Week
Posted by mikemac356 at 21:07 No comments: