I decided to do this 10K because my race schedule had a hole in it for the month of March. I found it on kind of short notice on one of the running websites I peruse. It was the inaugural event to benefit the Leukemia and Lymphoma Society and had 5K and 10K options. I choose the 10K because I am trying to keep all my runs above 4 miles in preparation for my May marathon. It was held in the town next to mine so it wasn't that far to drive.
I picked up my race packet the evening prior to the race,so I woke up the morning of the race and put my running togs on, got in the car and headed over to the start at Francis Marion Intermediate School. I arrived about 15 min before race time so I hit the sidewalks for a mile warm up to get the old knees lubricated. This was going to be my first race without my knee brace in probably 3 years. I am trying to wean myself of the brace as my knee now only hurts when I am through running not generally during an event. Got back at the start/finish line just in time to hear the announcements and then the National Anthem was sung by some local high schoolers. This was a really small race, it looked like less than 50 runners were there for both races.The temperature was about 27 degrees with no wind.
We got the command to start and I headed out at my normal training pace. I have been noticing that my average pace on training runs has been dropping, which hasn't happened in a few years, so that is good news. I started towards the back as always and slowly weaved my way through some of the other runners as we all started to settle into our paces. The first 6/10ths of a mile were on the same street the school was located on then we turned right and headed slightly downhill for a block or so then turned right again and headed back behind the school. By this time we had all spread out into basically single file and I started concentrating on running an even pace and slowly reeling in the runner ahead of me.
Approximately mile 2 we took a left and hit our first long hill, I passed a few people on the hill as I usually can keep a decent pass going up hill. We continued on through a neighborhood and the course was either downhill or flat in this portion. We passed the first water stop, but I didn't want any at that point. We turned back towards the north and headed back towards the start point about mile 2.75. It was at this point I got passed by 2 guys wearing blue. After they passed me I concentrated on not letting the distance between us get any bigger. We both continued to pass a few people as we hit the up and down rolling hills of the course at this point. Approximately mile 3 the 5K runners turned off and the two guys in blue slowed down slightly. I thought they were 5K runners but eventually they kept going straight along the 10K course. At this point I caught and passed them and then took a left and headed back away from the start.
The 10K course went down streets just off the main downtown area of town and eventually we hit another water stop at mile 4.5. I slowed to a quick walk and gulped down a cup of water. I picked it back up and about mile 4.7 we hit a steep downhill section. I hate those because, you guessed it, at the bottom we took a left and headed right back up the same hill. It was about 500 meters long and steep.My asthma was acting up during the race due to the wild temperature swings we have been having and the steepness of the hill just hit me the wrong way. I utilized my inhaler more than once which is unusual.  So I had a little hiccup on this hill and my pace slowed down.It was shortly after the top of this hill that one of the guys in blue passed me, he had apparently left his friend behind. I kept him in sight for the rest of the race but was unable to catch him again.
After this hill, the course continued to head back towards the start and also continued to alternate between flat and rolling terrain. At mile 5.5 we started to retrace the start of the race in reverse. As we took a left to head back up to the street we had started on, my Forerunner GPS said 6.2 miles. I hit that in 52:30 which is 2.5 minutes off 10th Group standard but not bad for a former action guy. Well since 10K equals 6.2 miles and the finish line was nowhere in sight I was a little concerned about the course accuracy. We took a left back onto the original starting street and I could see the finish line in the distance. I finished strong in 57:07 and my GPS said I had run 6.77 Miles. I confirmed this with another runner whose GPS also had the course as being long. Something they can work on for next year but overall a good race. My pace for the entire race was 8:26 minutes per mile and for the 10K was also 8:26. I ran an additional distance after the race as a cool down and with the warm up ran a total of 8 miles at a 8:40 pace.
Posted by mikemac356 at 16:01 No comments:

Douchebag of the Week 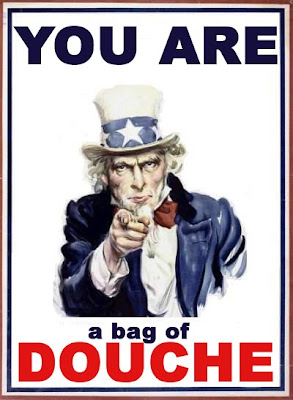 As an EMT and a retired Special Forces soldier I have seen my share of douche bags. You know who I am talking about, the guys from suburbia who have there pants so low on their hips they walk like a frickin penguin or the hipster at Starbucks drinking their Latte while talking on their iphone and wearing their sunglasses indoors. My douche bag of the week is not any of those however; my douche bag is emergency medical personnel who think they are too cool for school (pardon the use of the way back machine for that expression.)
Don’t get me wrong I have always said that if it is black and has Velcro then it by default must be cool. However gear alone doesn’t make you cool it is what you do with your gear that makes you and the gear cool. Emergency medical personnel who show up at the scene with their 511 tactical pants, titanium trauma shears, and sunglasses and then can’t do a basic assessment just look like the ring leader of the ass clown circus.    We used to call people like this a walking clusterfuck.
EMT-B Smith pulls up to the Ambulance garage in his Ford Ranger pickup with the EMS license plates and flashing white light, the white light denotes he is but doesn’t allow him to drive any faster or ignore any traffic laws. Hey, having a light is cool. On his back windows are the Star of Life and the slogan “ saves Lives”. He hops out of the truck ready to spring into action. In the cargo pocket of his pants are his trauma shears in tactical black, 15 ink pens in case he runs out on scene or has to do an emergency tracheotomy and his ipod with a copy of the field guide. His coat is a personally obtained Level 3 reflective coat that says EMT in big reflective letters on the back. That’s in case anyone forgot when he gets on scene. He has tactical communications in the form of his pager and handheld “walkie” so he can talk the lifeguard helicopter in or coordinate with medical control should he be the incident commander. He is wearing GSG9 Addidas tactical boots in the hopes that SWAT is in need of a helping hand.
When EMT-B Smith arrives on the scene he dons his medical gloves and heads straight for the patient, damn scene safety!!! The patient has an altered mental status, is lethargic and diaphoretic. The patient is showing obvious signs of a diabetic issue so naturally EMT-B Smith slaps a cervical collar on, backboards the patient and declares a trauma alert. Hey trauma is cool, medical issues take a backseat. PUHA or Pick Up and Haul Ass are the watchwords of the douche bag. Lights and sirens are also cool. When EMT-B Smith gets to the Emergency Department he is much more interested in talking to the charge nurse about his exploits than giving a thorough report and handover. Did I also mention that patient blood pressure is always 120/80 for this douche?
When I was in Special Forces we called ourselves “quiet professionals.” It is not the loudest or the flashiest operator that you want on the objective but that quiet professional that is tactically and technically proficient and can get the job done. This can also apply to many other professions such as . Be proud of who you are and what you have accomplished as an EMT. However let your actions speak for you not your attitude or the gear you wear. The world needs Emergency Medical Personnel we have plenty of douchebags.
Posted by mikemac356 at 20:34 2 comments: