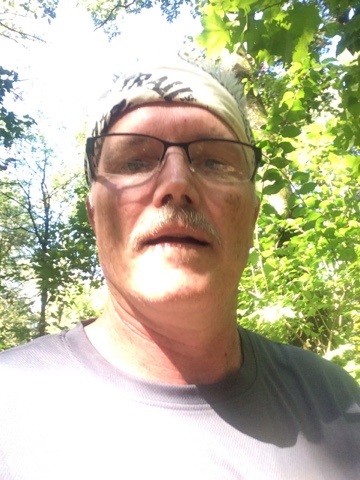 I know I know what the hell a Race Report? We thought you quit racing? Well it is true I haven't raced a race in any fashion since May. But I thought I would get back on the horse with a local trail race. This was the first running of the Pleasant Creek Trail Race.  There was a 15K and a 30K option. Due to my lack of racing and still rehabbing my injury I decided on the 15K version. It was a good call.

The day was perfect and the trails were muddy and wet. I had a great time trying out my new Hoka Challengers in the muddy puddles. I just ran it like the old days. Taking pictures and enjoying the trails. Whenever I felt myself getting competitive I remembered to just take it easy and not let my for deteriorate. Not much else to say I finished the 15K loop in 1:47:23. I was pleased with the result enjoy some pictures. 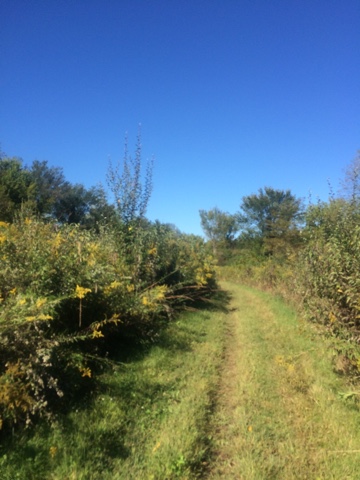 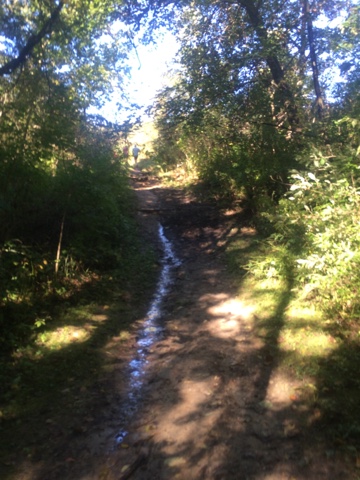 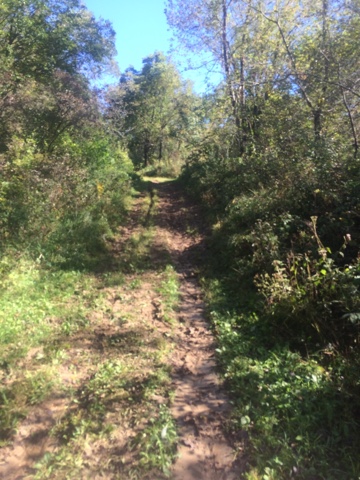 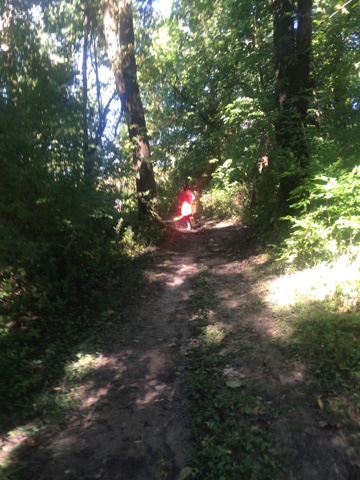 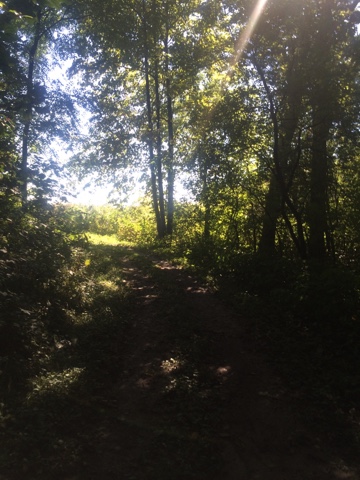 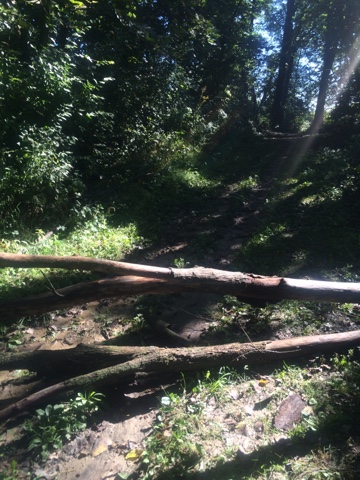 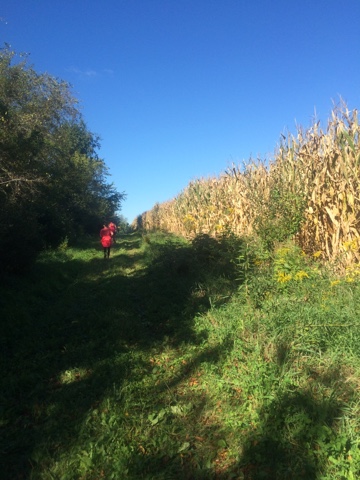 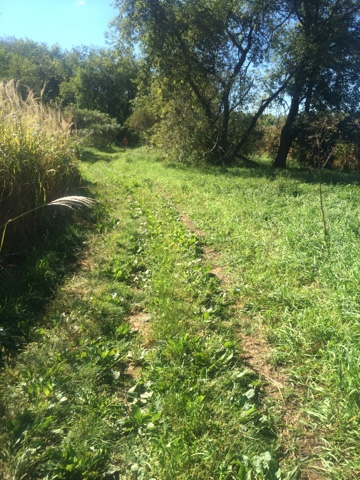 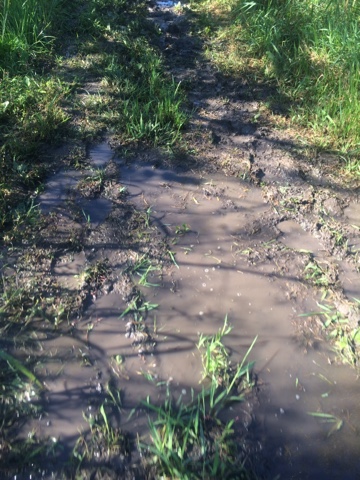 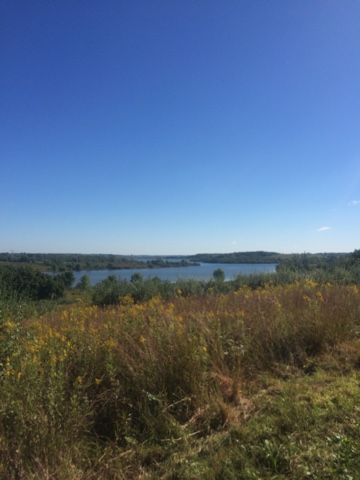 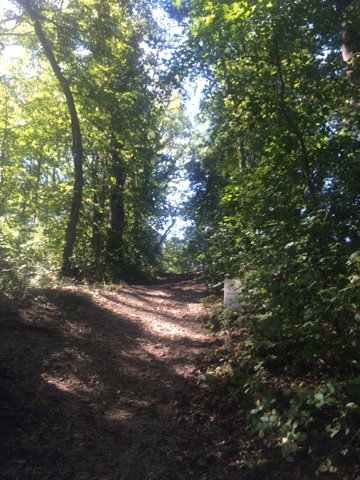 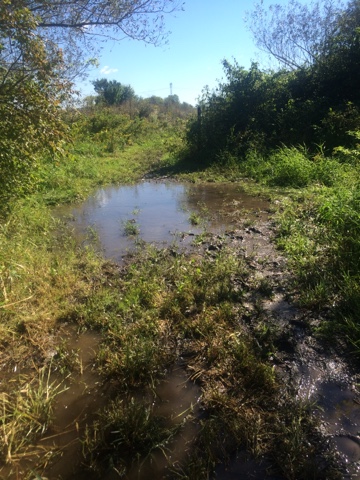 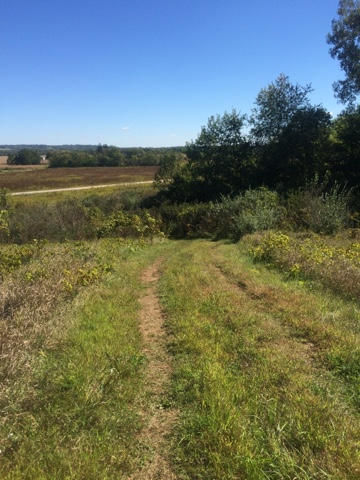 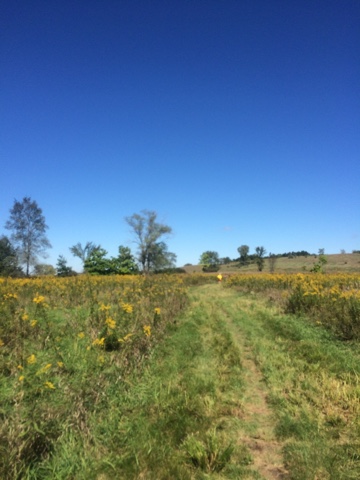 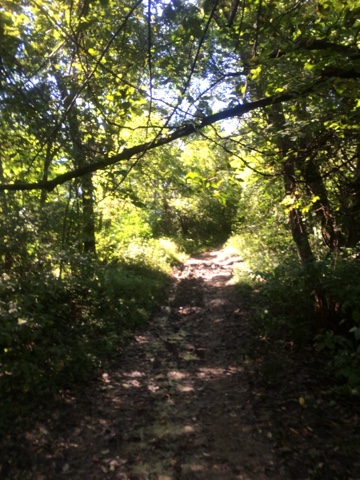 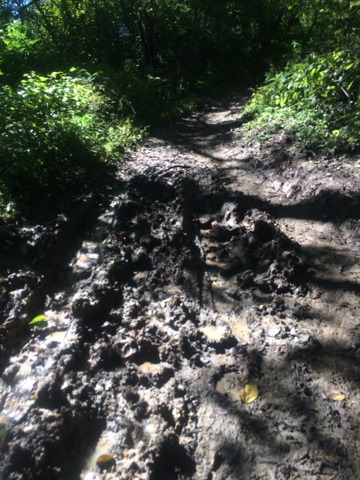 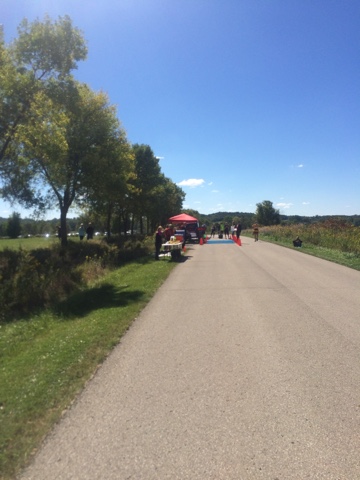 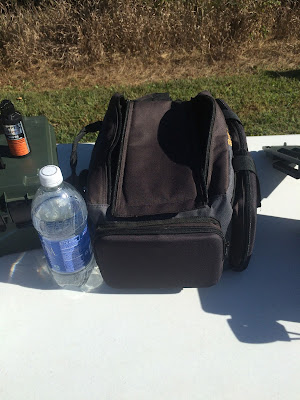 Over the past year I have attended many of the I.C.E Training Company's courses. The one I was missing however was Advanced Pistol Handling. When I found out the one day version, Fundamentals of Advanced Pistol Handling, was being offered locally and being taught by the same two instructors who had taught my Defensive Firearms Coaches class I registered right away. The two instructors Jamie Onion and Mike Anderson really work well together and I appreciate the dynamic they bring to the instruction ( excuse me while I wipe the brown shit off my nose).

APH started like most I.C.E Company courses with the three safety rules and range brief. The responsibilities of Safety,Comfort and Competency was reiterated but since a prerequisite for APH was to have successfully completed Combat Focus Shooting these points were not belabored. The focus was on getting us on the range.

We started off with the standard Extend, Touch, Press drill so the instructors could evaluate our abilities and correct any deficiencies early in the learning cycle. We quickly moved through the startle response, incorporating lateral movement,presentation from the holster, the Balance of Speed and Precision and the Critical Incident Reload. All of these things were familiar to me. After about 90 minutes we started getting into unfamiliar or at least rusty territory.

We started working from different unorthodox positions. We conducted B of SP drills from kneeling,sitting and laying supine with our feet towards the target. Eventually we incorporated "flow drills". I was familiar with these from the Combat Focus Carbine class I had attended. Essentially we did some tactical yoga by continuously moving between the standing,kneeling and sitting positions. When the "up" command was given you had to process the information and if you were between positions you had to go back to the previous position or move forward to the next. This drill was fun but it did remind me I am getting older and I am not as flexible as I should be. While not all that strenuous for me it did provide some challenges for other students as well. I think this drill highlights the need for physical training being incorporated into self defense training. It isn't all about the tool if you can't catch your breath to employ it. 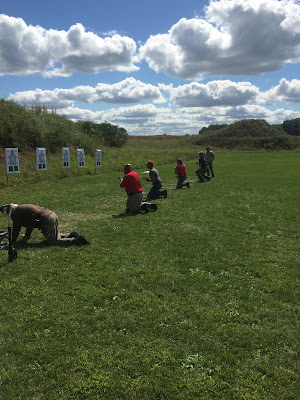 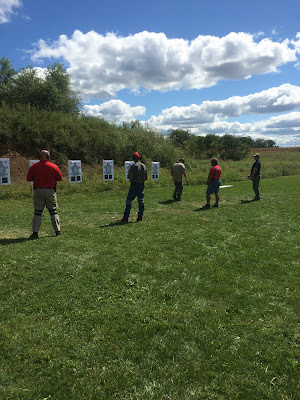 After these flow drill we shot from some other unorthodox positions such as prone with head facing towards the target. I experienced some cognitive dissonance when I tried a critical incident reload while "upside down" and "backwards". Trying to think my way through rotating my Glock 19 so gravity would help me drop the magazine and reloading the magazine without looking required some serious brain sweat. Not something that would happen that often but something that could happen potentially. 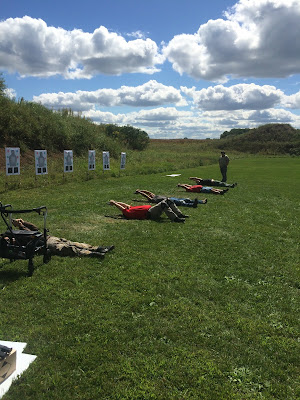 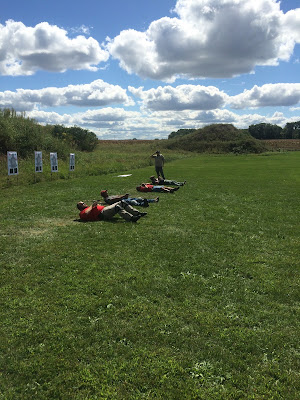 After a lunch break we moved onto strong hand and weak hand shooting and one handed reloads. It was during this evolution I was thrust into the spotlight in almost the exact same way I was when I went through CFS with Rob Pincus. We were shooting the Balance of Speed and Precision weak hand only. During the Balance of Speed and Precision the "up" command stimulates the shooter to place 3-5 rounds in the combat effective area of the target as fast as they can accurately. If a number is called the shooter needs to place one well aimed shot into the 3 inch circle that corresponds to that number. Sometimes I get inside my own head and such was the case during this drill. Although I had been hitting my numbers fairly consistently all day when Mike called out the number 2 I missed weak hand only. I must not have been the only one because he told everyone that had hit the number to step back. He then gave the command again and I missed again. And so it went the same exact thing had happened to me in front of Rob with the exact same number back at CFS. Eventually I was the only one left that hadn't hit the number. As I stood there, alone on the firing line, Jamie came up beside me and asked which eye I was using to aim and some other questions. He then told me to fire and I missed again. Now these guys know my background and I imagine they expect a certain amount of proficiency from me. I certainly do, but I am "weak" with the weak  hand. Jamie examined my sights trying to give me any excuse for my suckedness but as I missed for the 5th or 6th time he just stated "Nope its you." So we moved on with my ego a little smaller. But that is good training and I know what to work on.

We then moved on to Non Diagnostic Linear Mulfunction Drills. In a nutshell we would be resolving malfunctions without observing the issue and following a linear protocol. I am not going to repeat the protocol because you can pay to learn it like I did but here is some photographic evidence. 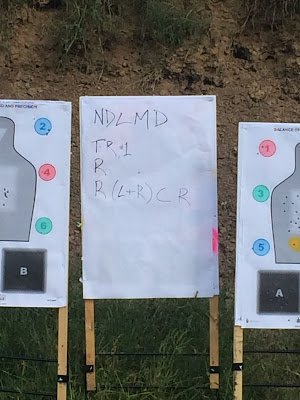 We induced malfunctions by having another student randomly load an empty case somewhere in our 3 magazines. One for each magazine, somewhere other than the first or last round. Whe then conducted a B of SP drill both strong hand and weak hand only resolving malfunctions and the need to reload as it presented itself. The challenge for me was being able to recognize if the inability to fire was due to a malfunction or because of slide lock. This drill certainly tested all your cognitive abilities. It was while shooting weak handed again that I had another spotlight moment. I experienced a malfunction and followed the protocol but I could not clear it. I continued down the path but it would not clear. Once Jamie noticed my issue he had me try a few other techniques to try and drop the magazine even going so far as to depress the magazine release with my left middle finger and try to extract the magazine with my teeth. No Go. Finally he took my Glock from me and this is what we saw. 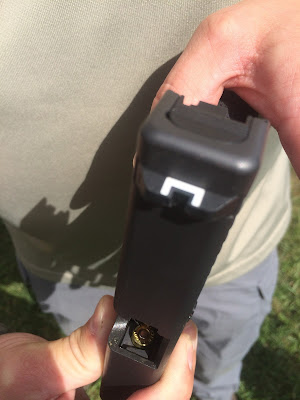 The empty casing had failed to extract during my efforts and racking the slide had stripped another round from the magazine with nowhere to go as the chamber was full of brass. My repeated attempts to extract the casing had jammed  the follow on bullet back into the casing so far it split the casing and jammed it behind the magazine release. There was no way it was coming out one handed. At that point I had a very expensive brick. Another lesson learned, shit happens, have a back up plan. Jamie was able to clear it with two hands and once again we moved on.

The culmination of the course was shooting from a vehicle both weakside and strong side. We started out from chairs working on drawing and presenting the weapon without flagging our own bodies. Eventually we individually shot from the drivers seat of Mike's SUV both out the drivers window and the passenger window. Surprisingly the hardest part was getting the seatbelt off and not extending the gun outside of the window. I successfully completed the evolution but in the days since I have found myself practicing unbuckling my seatbelt and visualizing drawing my firearm trying to make it smoother. 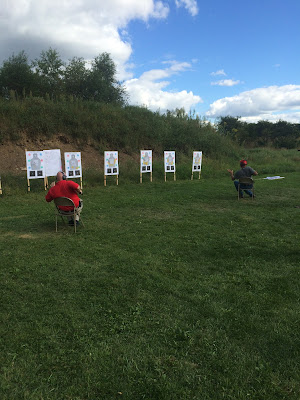 As is the SOP after class we conducted a debrief. Every student is required to talk and I said my piece first as I had to leave for work. My two takeaways were obviously more work on weakhanded manipulation and also that no one had ever instructed me to move my strong side leg out of the way as you draw from an unorthodox position. This is so you don't flag yourself even for a small amount of time. No one had ever taught me this technique which was actually shocking to me. Maybe in the military they accept a certain amount of risk that they could have easily mitigated. I really enjoyed this course especially after a shittastic work week. I think I am ready for the CFS Instructor development Course in a month.
Posted by mikemac356 at 21:37 No comments:

No, I am at a crossroads of purpose. For a long time I have been feeling a lack of purpose. Back in the day everything I did had a purpose. We did everything like our lives depended on it. More often than not it did. Now a days I feel like I am going through the motions. Like I am just showing up an making the doughnuts. Nothing really means anything. The lack of professionalism among most of my workforce or even a shred of caring about the quality of their work is wearing me down. My outside activities where I work as a Paramedic or serve as a Reserve Law Enforcement Officer is where I feel that old sense of purpose.

However I am in a trap. Success has trapped me. To leave the current situation behind would mean a significant disruption in the life of my family. I need to find someplace where I can once again have a purpose and do things like my life depended on it.
Posted by mikemac356 at 20:05 4 comments: