To Be or To Do 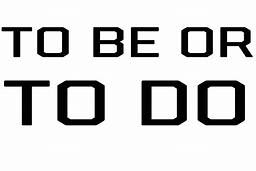 Colonel John Boyd was famous for being a legendary fighter pilot and for popularizing his famous OODA loop theory of human cognition. Colonel Boyd was also famous for other things, like his questioning of authority and the fact he never made General.  He once challenged us to Be or to Do.

Boyd said "To be somebody or to do something. In life there is often a roll call. That's when you will have to make a decision. To be or to do? Which way will you go?

What did he mean by this? Boyd was trying to say that we can be somebody, gain recognition and be a big shot or we can do something and make positive change. They are not mutually exclusive but they are not the same thing. Many of us, myself included, will fall into a trap of trying to chase that next promotion or the next best thing. we will worry about what others think of us and try to impress them.

The famous Roman Emperor and Stoic Marcus Aurelius' said " It never ceases to amaze me: we love ourselves more than other people, but care more about their opinions than our own." We often agonize over what people think of us when really they are not thinking of us at all. We can continue to try and impress those that barely notice or we can do.

We can do by effecting positive change. The US Army Special Forces call themselves "The Quiet Professionals." USASF conducts hundreds of missions globally in support of the National Command Authority objectives and they consider it mission success if no one even knows they were there.

So are we to be about impressing others or are we to devote our life to leaving things better than we found them? Are we to spend our time accumulating wealth and accolades or strengthening our bodies, minds and families?

On this, the 20th anniversary of the 9/11 terror attacks choose to do, be a quiet professional.

Email ThisBlogThis!Share to TwitterShare to FacebookShare to Pinterest
Labels: john boyd, stoicism, to be or to do