What a Great Day 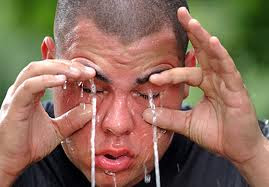 Today was great day, for a 12 hour period I was back in the fold. I was once again an Action Guy if only for a day. My employer asked me a few months ago if I would be interested in becoming certified as an Oleoresin Capsicum Aerosol Projector Instructor, or as they say on COPS good old pepper spray. Never being in the habit of turning down free training I agreed. So as luck would have it at O'dark thirty this morning I was headed north to the land of Cheeseheads. Arriving in plenty of time at the Dane County (WI) Law Enforcement training center I took a short nap in the parking lot waiting for the rest of the class to arrive.About 0745 I walked into the class room and immediately I felt comfortable and self conscious at the same time. I was happy because I hadn't seen that many weapons, black shirts and velcro since I left Special Forces, these were my people, however I was a little uneasy because I had no law enforcement background and the majority of these guys were SWAT team members from various agencies. I did what I always do in a situation like this, I took a seat in the back and shut my mouth.

At 0800 our instructor started talking,he was from Georgia and a former Chief of Police and SWAT team leader of 20+ years. His southern accent and good old boy attitude took me back to almost every class I ever took at the Infantry Center. For the next 5 hours he regaled us with the nomenclature, effects, deployment options, and tactical employment of Pepper Spray. Right after lunch we took a written test and once the formalities were out of the way we went to the range to spray and be sprayed. I felt the old familiar nervous energy mount as we practiced. Spraying inert OC Spray we moved laterally and subdued imaginary attackers. Soon enough playtime was over and it was time for the final exercise. The final evolution would involve getting a one second spray of live Pepper Spray to the eyes immediately followed by a "fight through drill." The drill was designed to give the student confidence they could handle being sprayed and still accomplish their mission as well giving them credibility when they discussed the effects. This was similar to what I did as a high altitude parachutist each time we re-qualled in the hyperbaric chamber.

So it was my turn, the instructor told me to close my eyes and hold my breathe, he then gave me a good shot of spray in the eyes. The next command was "blink" to make sure it got in the old eyeballs. I then ran about 30 feet to the first station where I delivered 5 right elbow strikes and 5 left to the pad being held by a fellow student. It was burning a little but no big deal, it was between the first and second stations where the spray kicked in. It started burning so bad I lost my breathe and stumbled slightly, I could feel some trickle into the corner of my mouth and my mustache was on fire. I got to the next pad and delivered a set of 10 knee strikes 5 on each side, at this point my adrenaline had kicked in and between the intense burning and my concentration I had developed tunnel vision on the task at hand. I grabbed the training baton for the next station and sprinted over to the pad delivering 5 forward and 5 backhand strikes. Last but not least I was handed a training pistol and approached my last classmate in the toe/heel fashion of walking I had learned in countless shoot house hours. I was yelling at him to get down as my weapon was trained on him. He was instructed not to comply until I identified the number of fingers he was holding over his head. "Get down, Get down, Three fingers, Get your hands behind your back!!!!!" I simulated handcuffing him and went into the officer distress position as we had been briefed.

At that point the instructor instructed the the safety officer to lead me to the decontamination station, this process required a lot of water and baby shampoo. Flush,Flush,Flush the eyes with water and soap. Blot with a paper towel, rinse and repeat. At this point I was losing my adrenaline rush and almost felt nauseous. Eventually though the pain was manageable and we went inside for a critique, 2 hours after being sprayed I was allowed to drive the 3 hours back home. As I type this 6 hours later my  hand that was grasping the weapons and my cheeks are still burning. But what a great day.
Posted by mikemac356 at 20:45