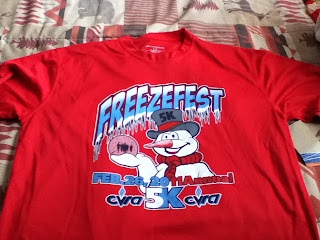 This was my first scheduled race of the year, I haven't ran a race since the Hawkeye 50K that I did back in December. This was also my second year doing this race and I wanted to better my time from last year which was 26:44. I have been training for the Ice Age 50 mile ultramarathon that I will be doing in May so I have been putting in some longer runs. However I have been doing some speedwork at the indoor track and have been able to maintain an 8 minute mile for 3-4 miles. Don't laugh 8 minute miles for me is speedwork,it's not really about speed but about effort anyway.

Now I will get my excuses out of the way upfront. I ran a grand total of 4 miles this week prior to the race due to having the flu and generally feeling pretty low. The temperature has also changed drastically and it snowed last night. Wild weather changes usually make my asthma worse,so all in all not at optimum form for todays effort.

I pulled into the parking lot of the event and went into the lodge to checkin and grab my race packet. I was number 105 and I got the sweet red shirt that you see above. I say sweet because most of my race t-shirts are white it was nice to get another color for once.I walked back to the car and geared up for the race. The older I get the more gear I need for a simple run. Hat and gloves-check,sunglasses-check,race number-check,race chip-check, ipod-check, knee brace-check, and yak trax-check. Glad I wore the yaktrax because about an inch of snow had fallen and the roads were covered with some slickeryness. 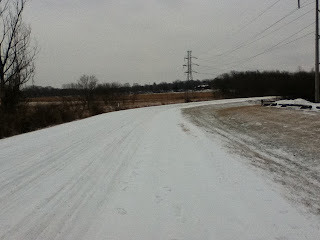 I then went on about a mile warmup running pretty slow and taking pictures along the route. I did notice some pain in my bad knee but nothing unusual and I just chalked it up to my inactivity from the past week. When I returned to the lodge parking lot, I took the obligatory prerace visit to the porto potty and waited outside for the race to begin.

Right about the 1100 start time all 200 or so racers ambled down to the start and more or less seeded themselves according to where they thought they would finish. I put myself somewhere in the middle. We tried to listen to the starter who was talking through a bullhorn but I for one couldn't understand a word she was saying. Eventually she said the words I could understand, Runners Ready,GO!! (what happened to set? no one says set anymore.)

I started out pushing my pace a little based on my indoor times I was shooting to finish under 25 minutes for the race. We initially headed east and while snow covered the road was flat and wide, I was passing people and settling into my pace. My breathing however wasn't relaxed and I was gasping a little bit, no problem I just took a hit from the old vitamin O ( inhaler) and I started to breath a little easier. I knew I would be using the inhaler a lot in this race due to the weather change and trying to beat a specific time. A few hundred meters short of the first turnaround the race leader passed me going the other way. He was moving pretty quick as you can imagine. More runners up ahead started to pass me going the other way so I knew the turnaround was close, after a few minutes I saw it and picked up my pace a little.

Making the turn we started heading back down the same road now heading west. I was passing other runners myself as they continued east towards the turnaround. about 3/10ths of a mile past the turnaround was the 1 mile mark. My 1 mile split was 8:01. I am not sure if at this point I  psychologically relaxed or if I just got tired. What I noticed is that I started breathing easier and now I was getting passed occasionally by some runners from behind. No one had passed me in the first mile. As we headed west we passed the start point and continued on down the road I continued to try and maintain my pace but I was still getting passed by a few runners and I was no longer passing others. It is this point in the race which was about halfway where separation usually occurs and people settle into their race pace. Just prior to the second turnaround was the 2 mile mark, my split for the second mile was 8:18 so I had run 17 seconds slower. A few hundred meters later we hit the second turnaround and headed back east along the same route. I could see the finish off to my left but we still had to run almost a mile before we got there.

I decided to try and run comfortably, and attempt to maintain my place in the race standings for this last part of the course. I pretty much accomplished this only getting passed by one person in the last .75 of a mile. Just about where the start had been was the 3 mile mark, my split for the 3rd mile was 8:17 so I was maintaining a steady pace. After the mile marker we took a right turn into the lodge parking lot and ran the remaining .10 of a mile to the finish. This last .10 was uphill which somewhat slowed me down ( excuse mulligan) but I attempted to power up the hill. Unfortunately I missed my goal by :38 finishing the race in 25:38. The good news is that I ran this race 1 minute 6 seconds faster than last year. Another good stat is that the times for my last 4 5K races have all been improvements. dating back to this race last year I have run 5K's in 26:44,26:22,25:46 and today's 25:38. So I consider this race combined with the awesome post race cookies to be a win.
Posted by mikemac356 at 15:25