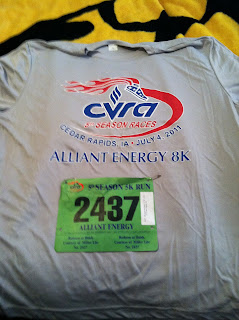 So for something like the 15th time I ran the Alliant Energy 4th of July  5K. I haven't missed this race much in the last 20 years. I even managed to make it most years I was in the military. The 8K race is the premiere road race in the area with quite a few professional runners that show up for the prize money. I usually run the non competitive 5K however. I don't need the money.

So I got up this morning put on my running togs and drove down and parked in the parking lot at work. I did this for two reasons, first I knew parking would be at a premium and second I wanted to get some warm up miles in before the race. So after parking I jogged the .75 miles to the start outside the Chrome Horse saloon. The Chrome Horse is a local establishment that is becoming somewhat of a sponsor for local sporting events. They sponsored the New Bo Fest Half Marathon last year and also the local mountain bike club (Linn Area Mountain Bike Association) has their board meetings there. Once there I saw a huge crowd of people waiting for the 8K racers to finish so the 5K could start. I guess the race organizers had counted on everybody running at least a 12-14 minutes pace for the 8K. This was not to be and even though the 8K had started at 0700 and the 5K was slated for 0815 we didn't actually toe the line until closer to 0830. So directly after the National Anthem we were given the word to move up to the start line. In an unusual move for me I decided to start closer to the front. In the past I have always hung out in the back and then once the race started picked people off. However I had been thinking that this was causing me unnecessary delays in the initial miles of the race and kept me from hitting my goal pace of 24 minutes.So I decided to head up front to see what would happen.

When the starting gun sounded I took off at a comfortable but steady pace. We ran a few blocks east before turning right and heading south along the Cedar River. Once we made the turn we were headed slightly up hill and I was passing people as I usually do heading uphill. As we crested the hill we started a long downhill section and I concentrated on lengthening my stride and taking advantage of gravity. This section was probably .5-.75 of a mile then we bore slightly to the right and dumped out on to the flat river road. This was also the first water stop and the one mile mark. At the one mile mark I had run a 07:37 minute first mile which was faster than I had run the first mile in a few years. Maybe my strategy was working?

As we headed towards the turn around I settled into a comfortable rhythm. I tried to breath evenly and not let the few people who passed me affect my own race plan. I also passed a few people and was in the top third of the pack as we made the u-turn at the halfway point. I made the halfway mark in 11:26. I was on pace for a sub 24 minute 5K and things were going to plan.

As we headed back along the course I could see the rest of the racers stretched out along the mile or so of the course that I could see. Somehow even though it was exactly the same distance seeing all those people made the return trip seem longer. I was starting to breathe a little labored and I could feel my pace slowing even as I tried to hold it steady. I hit the railroad tracks at the 2 mile point and started up the long uphill which had previously been the downhill, funny how that works. I had forgotten to look at my watch at the 2 mile mark but about halfway up the hill I looked and I was at 18 minutes.

I kept chugging up the hill not quite sure if I was slowing or it was an illusion due to the effort I was putting out running uphill. At the crest we now had a short down hill before making the left hand turn back west to the finish. At the turn as I saw the finish line about .02 of a mile ahead. I looked at my watch and saw it was going to be close hitting that 24 minute goal. I didn't speed up but I tried not to slow any further and once again tried to make my foot turnover quicker. I crossed the finish line and looked down at my watch, I had missed my goal by 34 seconds!! My time of 24:34 is still the fastest 5K I have run in the last 4-5 years and I have improved my time on every consecutive 5K in the last 2 years. I know this won't last for ever but for now it feels good.

Post race I grabbed a Gatorade and banana and then jogged back to my car. Total mileage for the day was 4.87 in 39:54 which will be my long run for the week. I am tapering for the 50 Mile Ultra Marathon I will be running for charity next Saturday. More on that next week but until then check out my donation page.
http://www.firstgiving.com/fundraiser/michaelmcelmeel/danceswithdirtdevilslake50mileultramarathon
Posted by mikemac356 at 21:27