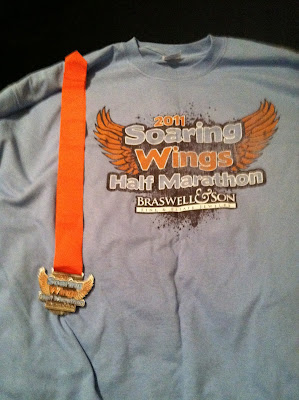 The Soaring Wings Half Marathon is held in Conway Arkansas to benefit the Soaring Wings Ranch childrens home. The cool thing about this event is that they give runners an option to register and run a virtual marathon without ever being in Conway. Once you send them proof you finished your own Half Marathon they send you a shirt and a finishers medal.

This is the farthest race I have run since the Dances with Dirt UltraMarathon I did back in July. I was planning on running the New Bo Fest Half marathon in September but due to a foot injury I didn't run the entire month of August so those plans were scratched. I saw this virtual race option on the internet and since I wanted to get one more long race in this season it was perfect.

So race day dawned crisp and sunny with a light wind and about 41 degrees, I took a vacation day from work so I slept in until 0800 when my youngest informed me he had overslept and missed the school bus. So I quick put on my running clothes and drove him to school. Once I got back I grabbed a banana and my water bottles and started out. I had decided to run a general route but my actual route was going to be somewhat of a mystery. I figured I would just run a big loop and at the end make up any distance needed. That plan actually worked out well. I also decided to take my time and take plenty of pictures.

I started out running part of a familiar route down 33rd Avenue heading east. I kept running down 33rd until it T intersected with Bowling street at about 3 miles. 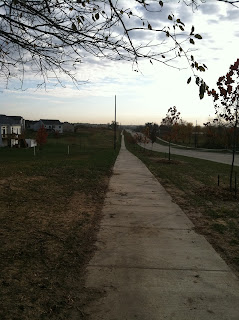 I live on the edge of Cedar Rapids which is a town of over 200,000, so my route would take me through farm land and urban areas. I then turned north on Bowling and headed up the first of two steep hills. This hill was about a mile long and was actually divided into two parts with a flat area in between. At the top of the hill I turned east again, running along Wilson Ave and then C St until I hooked up with the Cedar Valley Nature Trail and once again headed north. 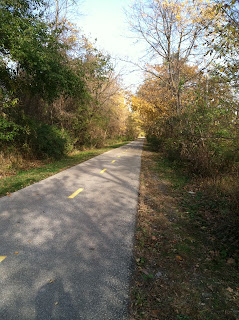 At about 7 miles I was still feeling pretty good, staying well hydrated. I stopped for a minute on the 15th Avenue bridge and then headed into the downtown area. I turned west on 3rd Ave and then zigzaged my way to 1st Ave still heading west. About mile 9 I hit the second steep hill, I was starting to get a little fatigued at this point so this hill wasn't as easy as the first. 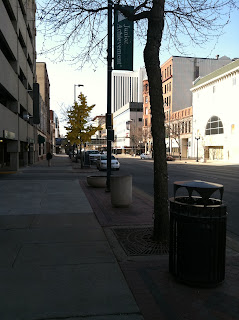 At the top of the hill I headed south running past Kingston Stadium, Veterans Memorial Baseball Stadium, and the Cedar Rapids Ice Arena. I stopped and synchronized my iphone imapmyrun app and my Forerunner GPS at this point. The iphone said I had run 11.09 miles by now and the GPS said 10.23. Since the iphone also said I had run 6 minute miles yesterday I went with the distance off the GPS. 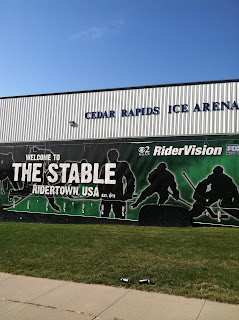 I was on the home stretch, I contiuend south on Rockford Road then and quick jog west on Wilson again and then a turn south on 18th St. I was now back out in the somewhat rural area although new housing developments are taking over the cornfields at a rapid pace. 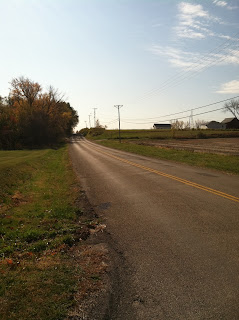 At 12 miles I once again hit 33rd Ave this time heading west until I got back to my neighborhood. I had guessed pretty good on the distance so I only had to take a little extra trip around the block to make up the last 3/10ths of a mile to finish at my front door at exactly 13.1 miles.

This was not a PR by any means. But all and all a good run/race and a great start to the morningf. 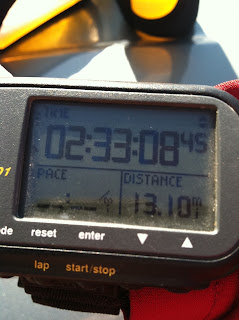 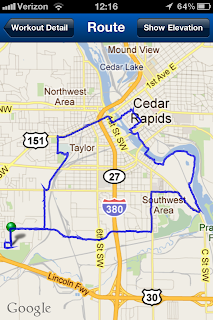