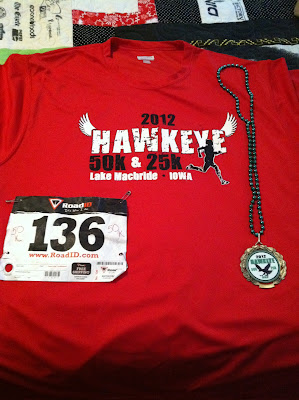 So this was the second running of this race and the second time I have run it. The inaugural Hawkeye 50K was in December 2010 but due to issues with the Park Ranger ( more on that later) the race had to be moved to March. This made the second annual race about 15 months from the first race. The conditions couldn't have been more different as this race day dawned sunny and warm with a high of 80 degrees and a 10-20 mph wind to keep you cool. Quite a difference from the "thundersnow" of the first race which I chronicled here http://www.mikemac356.blogspot.com/2010/12/hawkeye-50k-ultramarathon.html

So as I said race day dawned warm and sunny and I was better prepared having a mini-mule camelbak and plenty of supplements. I loaded everything in the car and drove the 25 miles to the Coralville reservoir where the race would be held. The 50K course was two 15.5 mile laps around the reservoir roughly broken into thirds with the first third being road, the second third crushed gravel trail and the last third technical trail.

Upon arrival I had to park about .5 miles from the start as the closer parking lot was already full. So I parked the car grabbed my gear and made my way to the start/finish. The walk to the start actually took me down a road that I would be running as part of the course later on. Once at the start I put my drop bag up against the building and listened to the Race Director give out last minute instructions. I tied my shoes and double checked all my gear and moved to the start line. 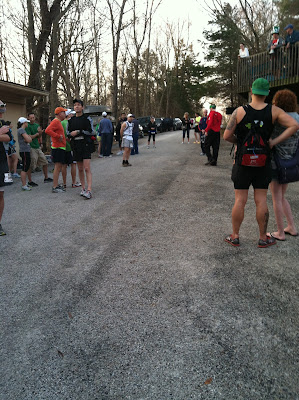 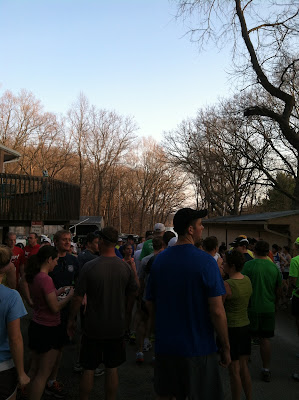 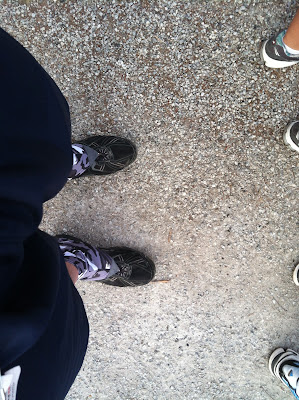 At the starting gun I hit my watch and my iphone running app. I also started the ultrarunning podcast that I have been listening to on my training runs. As I was using this race as a training run for a 50 mile race I have coming up, I had several other new things I was giving a try. I had new gaitors, a new nutrition plan and a new camelbak. I was breaking the cardinal rule of racing which is don't try anything new but as I considered this a training run I was ok with it. We ran down hill for about 50 meters then turned right onto the first section of trail, as expected a huge bottle neck developed and I actually stopped right there for a few seconds. After getting on the actual trail I slowly jogged through the varied terrain as I knew this section was less than a mile long and eventually we would hit the road and everyone would spread out. It was during this section that I got my first trip and fall out of the way. That's right less than a mile into the race I hit a buried root and took a face plant into the terra firma. More embarrassed than injured I popped right up with a loud " I meant to do that!"
Eventually we hit the main road for what would be 3-4 miles of highway shoulder running. This section was slightly up hill the whole way but did have some down hill as well. 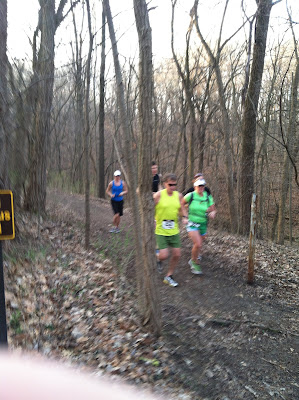 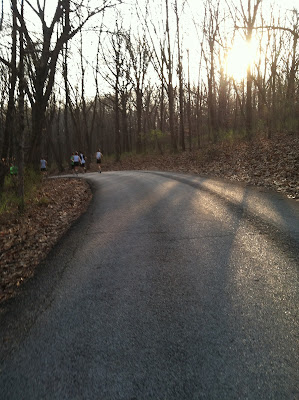 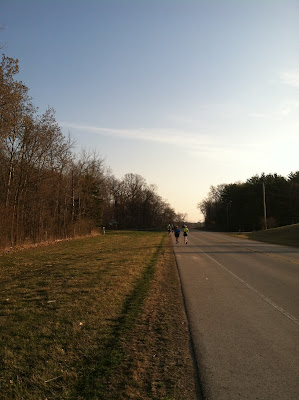 It was during this section that Jen R who I know from dailymile caught up with me and we started chatting. Talking to someone always makes the run go by easier. She was doing the 25K and it was really nice to meet her in perso. We would run a few miles together during this part of the race. After about 4 miles we took a left and headed into the first aid station at mile 4.5. The aid station workers were awesome and the station was well stocked. I grabbed a PBJ sandwich and some gatorade and headed over to the woodline to relieve myself. Part of the nutrition plan I was trying to follow involved taking a salt/electrolyte tablet (thanks for the bottle Deborah) and a GU Gel every 30 minutes. I was happy to see I was well hydrated still as I had been drinking out of my camelbak as needed.
I ran with Jen and a new friend Benny for the next few miles. Benny was from South Africa and was also running the 50K. This section of the course was around the lake and was mostly flat on a wide bike path. It offered some interesting views of waterfowl and boaters and I stopped to take a lot of pictures. Eventually Benny and Jen told me to go ahead as I was feeling pretty strong. I would see Benny again at the end of the race but I did not see Jen again. I continued along the lake taking my GU and electrolytes as planned. My biggest fear was to experience the cramps I had been hit with on my last two ultras. I was hopping this plan would stop those from recurring. My iphone app let me know I was keeping a steady pace and I was feeling pretty good. My plan was to finish the first lap in about 3 hours and then try to hit 6-6.5 hours for the entire race. Last time I ran this race I had hit the halfway in about 3 hours then bonked and slowed way down. I wanted to stay steady for the entire race this time. 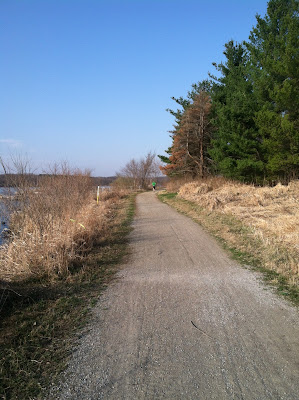 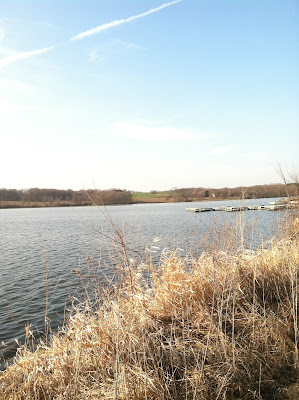 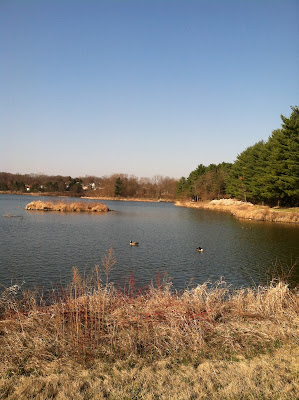 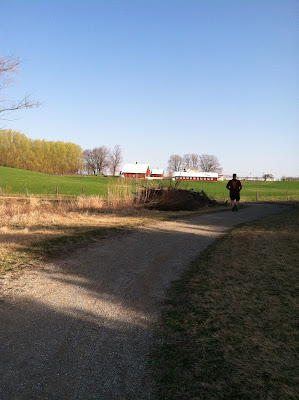 At about 9.5 miles we were dumped out onto another service road and we headed slightly downhill to the second aid station. I grabbed some more PBJ and fluids and also a hand full of peanut M and M's. I was staying well hydrated still up to this point. I headed back out, up a large hill then down that hill again to hit the trail. 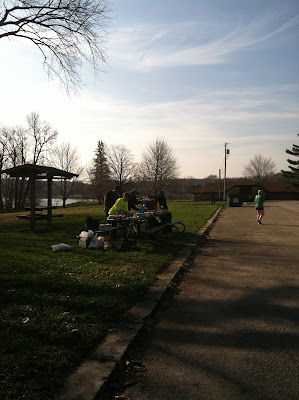 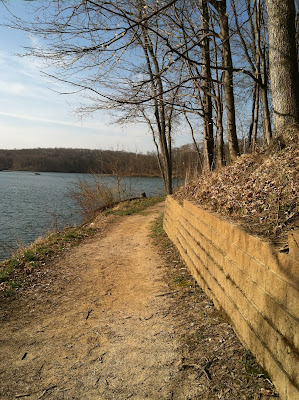 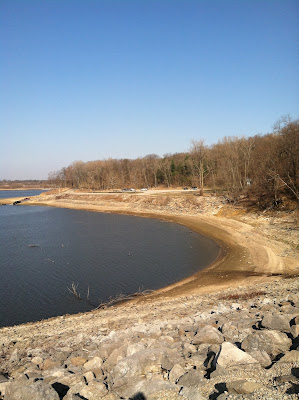 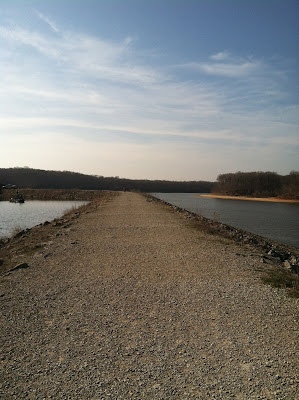 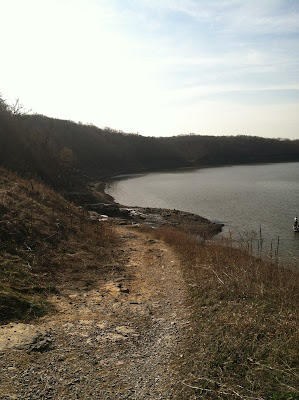 I ran this trail for a few miles until I hit the stream crossing. The water was pretty high this year so I plunged right in knowing my feet would be wet anyway. The water was cool and refreshing and my shoes were back to only slightly damp after a few minutes. After the stream crossing you had to climb a large hill and the course got way more technical. It was at this point about 12-13 miles into the race I started to employ power walking up the steep hills and running the flats and downhills. 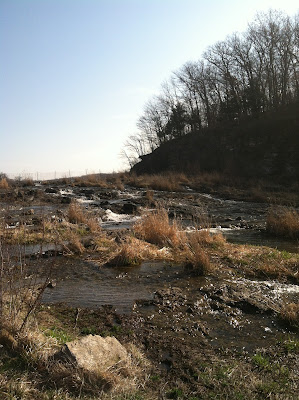 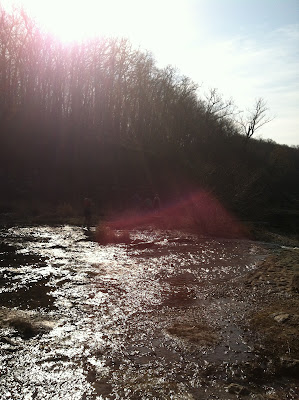 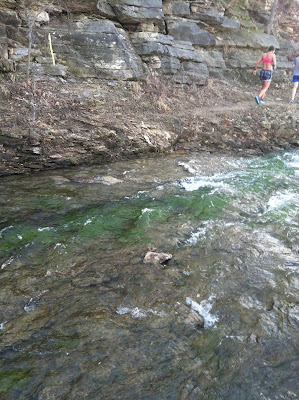 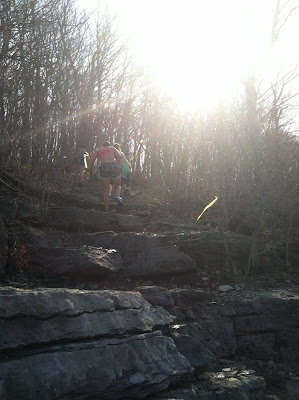 So I was stilling feeling really good at this point and the course took us by the start/finish where you had to take a right and head up hill and around the trails for about another 2 miles before the first lap was complete. I was starting to pass people and I completed the first lap in 2:56:44. I stopped for a good while at this point. I refilled my camelbak, downed some more water,ate some real food from the aid station and most important of all I changed my wet socks. After roughly an 8 minute rest I headed back out for lap number two. Lap 2 was a not a carbon copy of lap 1. Most of the runners where off the course as the 25k was complete. I would finish this entire lap only seeing 3 other runners. Once I hit the highway section I was starting to compare the way I felt on the second lap to the way I had felt in the previous race. It was night and day. I was feeling very strong at this point. I could see two little black specks a mile or more in the distance and I was determined to run them down. I didn't alter my pace but I just kept running steady. At the turn into Solon I met my friend Dave who was out for a Triatholon training ride on his bike. We talked a few minutes as he rode by my side. He said I was looking good which was a big morale boost as I was hitting the 20 mile point and hadn't really felt any fatigue. I hit the aid station again and was able to pass the two black specks who had turned into runners as we all stopped at the aid station. 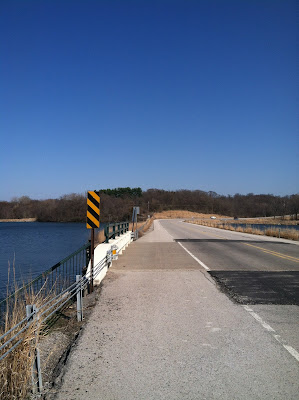 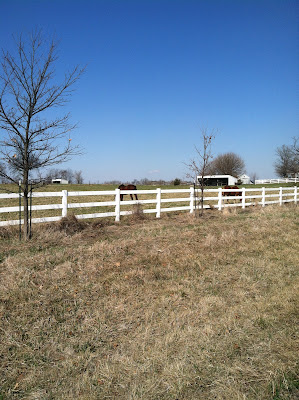 When I headed back out onto the trail I switched my entertainment from the podcast to some metal. For the next 7-8 miles I would be banging my head as I ran down the trail. A few miles into the lake section I passed a guy who said he was having some cramping. This was the same area that I had experienced my massive leg cramps the year before. I offered him a electrolyte tablet but he said he had just taken one. Then he said" Hey are you Michael?" I said yes. He said " I'm Ed" Another dailymile friend I had met in real life. He ran with me for about a mile as we talked about the 82nd Airborne eventually he had to walk again. I wished him good luck and kept running down the trail. I was still pushing the GU but after 4-5 hours it was starting to make me mildly nauseous. I knew I needed the calories though as I could tell despite my best efforts I was starting to bonk a little and become dehydrated. I passed the second aid station again and grabbed some more PBJ, M and M's and plenty of fluid. There was a guy there laying on his back trying to stretch his calf out who shouted me some encouragement as I took off. I was starting to smell the barn as I was under 5 hours and knew I had roughly 6-7 miles to go. 6 hours looked like a doable time. Somewhere on the trail to the stream crossing my iphone ran out of juice. I would run the rest of the race sans music. The second stream crossing went much like the first but I could tell climbing the hill out of the stream bed that I was starting to get fatigued. I continued my power walk/run method the second time through this terrain and felt I was keeping a steady pace despite the growing fatigue. 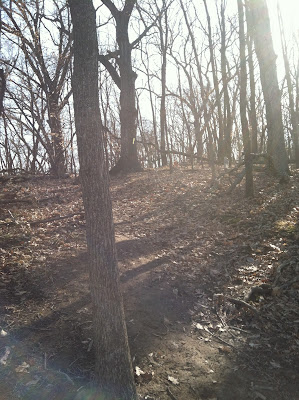 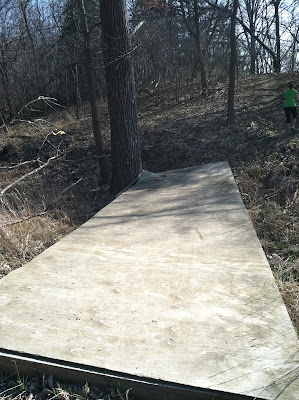 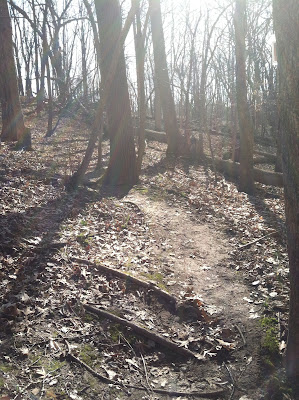 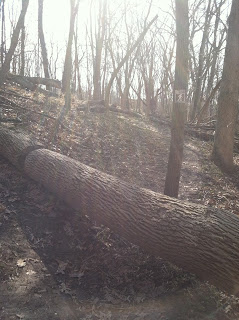 As I passed the start/finish area for the third time and was taking a right to power up the incline, I heard a voice yelling for me to stop. The Race Director came running over and said that the race was officially canceled per the Park Ranger. There had been a runner with a medical issue during the race and the Park Ranger was shutting it down. I was pissed especially since I was about 3 miles from finishing. The Race Director advised me to stop and that I would no longer be timed. I told him I understood but I was going to finish my "training run" as a private citizen. So I took off on the last three miles. It was at this point and will forever be Hawkeye 50K tradition I started humming the song Por Ti Volore song from StepBrothers. During this last section I was passed by a shirtless guy who had also declined to stop. I kept him in sight though and finished just a few minutes behind him. I got back to the unofficial finish line in the unofficial time of 6 hours 8 minutes and 33 seconds. This was a 50K PR for me by 1 hour 13 minutes and 11 seconds. Awesome but nothing like being a race bandit at a race you paid for. I am still upset about the knee jerk reaction of that Park Ranger and immediately after finishing this post I am going to write a indignant letter to the editor and the DNR voicing my concerns about Big Brother, the governmental nanny state, and poor decisions. I will be running in the Trail Mix 50K in 4 weeks which should be another good race.
Jen this is for you
Posted by mikemac356 at 14:38