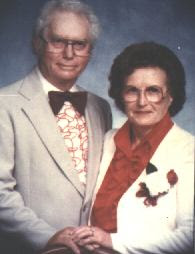 I was riding home in the back of a van last weekend. My Father was driving this van  and it contained one of my brothers, one of my sisters, my nephew and my youngest child. Everyone was asleep but my Dad and I was staring out the window at the countryside of western Iowa. We were on our way back home from helping another brother move and it was a 5 hour trip. 5 hours of cornfields, farms and small towns. My mind started to wander and I starting thinking about my Grandparents Leo and Helen. I started to think about their farm and the time I had spent on it.

Everyone in my family until my generation had been farmers. My Dad's generation grew up on farms but moved to the city and no one in my immediate family still tills the land. Being older I was one of the few grand kids to see my Grandpa's farm. My Grandpa retired from farming when I was about 13 or so and moved first to a small town then to a larger city.

I still remember staying there on weekends and over the summer. How we would wake up early, ungodly early for a city kid like me and go milk the cows. I can still smell the barn, its aroma of cowshit, milk and straw. I can see the big vat of milk as it was pumped full and then later in the day when the milk tanker would come by and empty it for the next day. I remember hearing popular songs of the 60's and 70's on WMT radio 600 on the old transistor radio nailed to the barn wall and covered with fly droppings.

I remember coming inside the house after morning chores and removing our clothes so as not to track in the house. Then Grandma would make breakfast with fresh milk and bacon. Eggs fried in the bacon grease. Maybe some cheese and always bread and butter at every meal.

We would go out again, maybe we would bail hay and Grandpa would let me drive the tractor, except he would turn it at the end of each row because I didn't have the arm strength. Or he would use the end loader to clean out the hog pens and I would have to get the corners with a scoop shovel. Sometimes my cousins, sister, and I would climb up to the top of the corn crib and kick the corn down into the whirling screw of the hopper as it ground up the cobs into feed for the dairy herd. Or we would catch the horses and go for a ride. Sometime Grandpa would send us off with the tractor and wagon to fetch a newborn calf or we  would walk to call the cows in for the afternoon milking. They didn't need us though as they were already headed to the barn just like clockwork.Sometime we played hide and seek in the corn fields.

Lunch would be sandwiches and more milk or maybe hamburgers. Grandpa would pay me a nickle a bird to shoot the Starlings and Sparrows in his barn with my BB gun, as they would eat his grain. Often I was in charge of feeding the calves and would mix formula and goose eggs together with water and feed them with huge baby bottles. They would suck on the nipple so hard I could barely hold on.

Dinner would be pork chops or chicken, with more bread and butter and maybe a dandelion salad drenched in bacon grease and vinegar ( don't turn up your nose it was delicious). Sundays we would eat duck or goose and have a huge meal for lunch. And pie, my Grandma made the best pies ever.  I still love pie to this day. Sunday afternoons we would watch the Floyd Warren Jubilee or Professional Wrestling which my Grandfather loved.

Grandma was a painter and a gardener. Her garden was bigger than most people's yards and she had vegetable and flowers that were amazing. She ran the LeHe art gallery out of her basement. She painted the most incredible pictures of clowns, little trolls, still lifes and landscapes of the Iowa countryside. She won many many ribbons. She had a library also, in my Grandma's library I first read Sherlock Holmes and James Bond, Tom Sawyer and Robinson Crusoe.

In the evenings we would all take our baths and hang out in the living room. We would eat popcorn, homemade ice cream and apples. We would drink green Koolaid out of a ice cold metal pitcher. So cold frost would be on the outside.