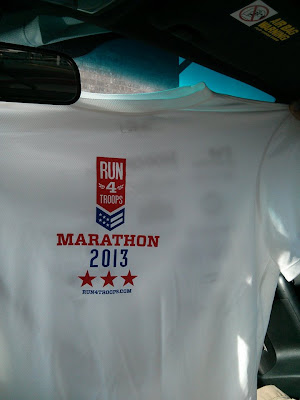 I decided to run this marathon about 6 days before the event. Honestly it was my 3rd choice and my contingency plan. I knew I was going to run a race on 22 Jun but I didn't know it would be this one. My first choice was the Dizzy Goat 12 hour race but I procrastinated and didn't get registered before the cutoff. My second choice was the SugarBottom 10K trail race, which I had run last year. However after I registered this race got cancelled due to some flooding and participation issues. So I was left with my third choice. I emailed the RD and she graciously let myself and a friend enter even though it was past the cutoff date. It turned out for the best though because we had another friend already running the race and now we would have a small group.

I ran this race last year and I enjoyed the event. I actually set my marathon PR in last years event. I really didn't know how I was going to run this race but circumstances eventually dictated the outcome anyway. Everyone else in our group drove up the night before and my friend Peter nicely picked up my race packet for me. I choose to spend my anniversary with my wife and drive up the next morning. This meant a 0230 wake up call and a 90 minute drive fueled by bad coffee and a honeybun. It was an early start because the shuttle bus from the finish to the start left at 0515 for the 0700 start. As it turns out I could have slept in. I arrived at the shuttle bus on time and got my race packet from Peter. He was accompanied by his friend Brad who I had met before. The three of us boarded the shuttle bus and took about a 40 minute ride to the start. On arrival I picked up my timing chip and wet met our other friend Ross. Then there was the usual pre race milling around. About 0630 when the pre race briefing was supposed to occur the RD instructed us to move into shelter as there was some severe thunderstorms headed our way. A local company graciously let us into their building where we waited for the next two hours while the storm blew through. 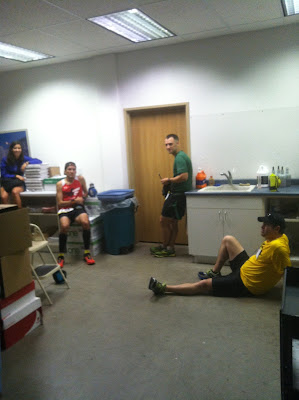 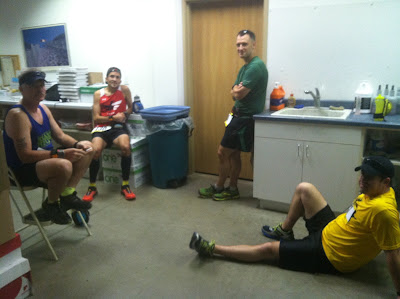 So race start time was pushed back until 0900 which made my decision to just run this race as it came and see what happened. I thought I could go sub 4 hours with not much problem based on my last marathon. Eventually we had the pre race briefing and we toed the start line . It was still windy and overcast at the start. As in the previous year we needed to run about .5 miles out and back on a paved road before we hit the actual trail. Again we were lead by an old Jeep. 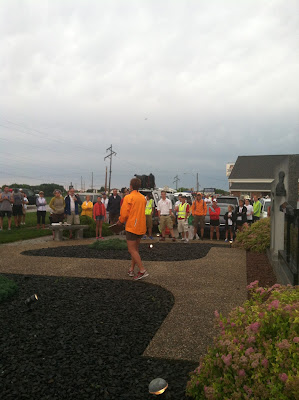 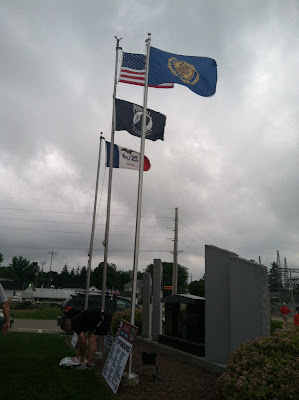 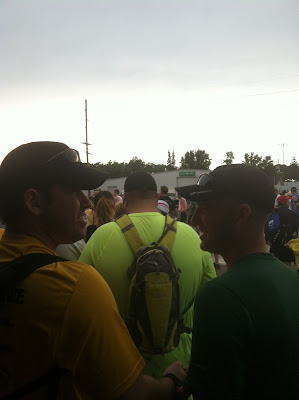 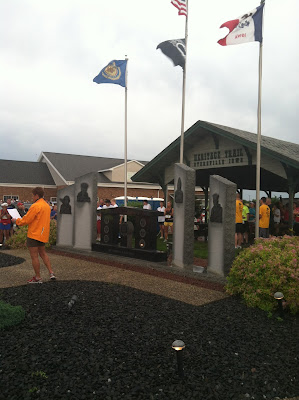 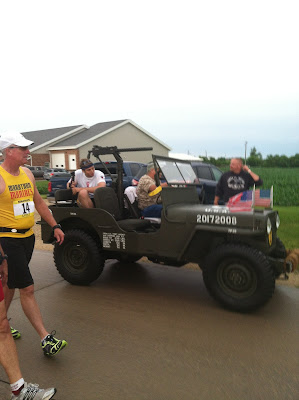 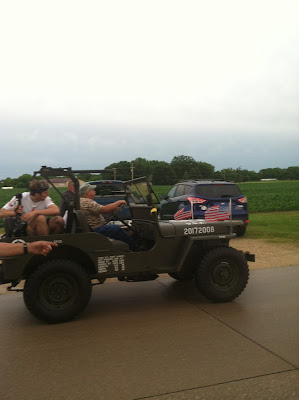 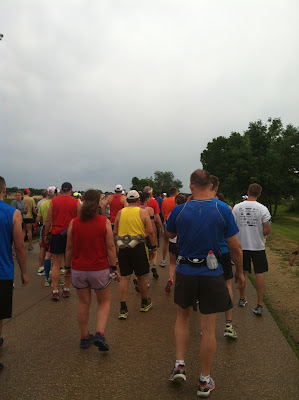 Once the race started I just tried to keep it comfortable. Ross and Peter were ahead of me and Brad was behind and that is the way we would remain for the race. I really had no preset pace in mind but felt pretty comfortable at about an 8:30 pace. I was able to maintain this pace despite the 20 mph headwind we ran into the first 7 miles or so. I even managed an 8:00 minute mile in there. This is the 4th time I have run this Heritage trail system. It is flat,wide, and mostly crushed limestone. Parts of the course are wide open and some are sheltered and shady. Due to the non technical nature of the trail this race really had more of a road race feel than a trail race. This was also due to the fact that there where roughly 75 relay teams conducting a marathon relay. There were only 110 actually marathoners running the race.

I was moving along at a decent pace until about mile 12. I finished the first 11 miles in about 1 hour 33 minutes, I was even letting the sneaky thought of getting a new PR enter my head. However it was not to be. I wouldn't say I bonked or the wheels came off. I felt fine the whole race however my pace slowly and incrementally slowed the last 14 miles. I attribute this to a few things, I had some residual fatigue from the 100 mile race I had completed 3 weeks prior, due to the late race start we ended up running during the hottest part of the day and after a few hours the sun came out and the humidity rocketed. I had banked some miles however and was able to maintain enough of a pace to be within reach of my 4 hour goal. I was pleased to note in the last 5 miles or so I passed a lot of runners that had sped past me at the beginning. I think I gained 11 places during the last 5 miles.

I did have an incident at mile 16 with an electric fence that would only happen to me. I stopped to use the woodline and as I was doing my business the sunglasses feel off my visor where I had them placed. As luck would have it I was facing down hill so they actually rolled down hill and under what looked to me like an electrified fence. This were expensive Tifosi sunglasses that I had won. I could never afford another pair so I ended up low crawling under the fence to retrieve the glasses. That added a few seconds to my time I would say. 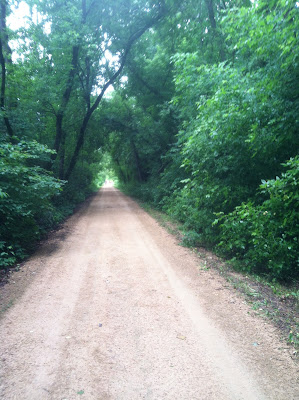 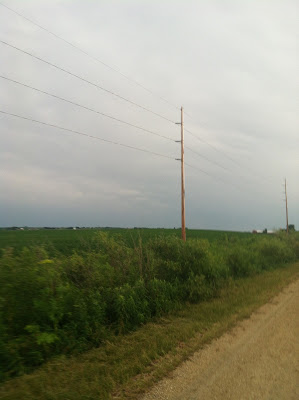 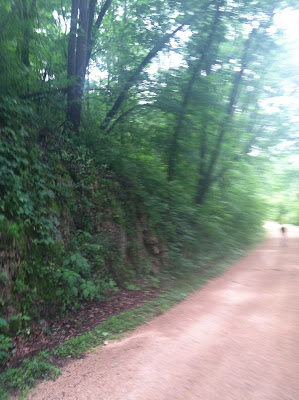 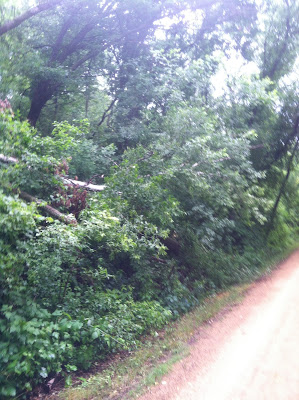 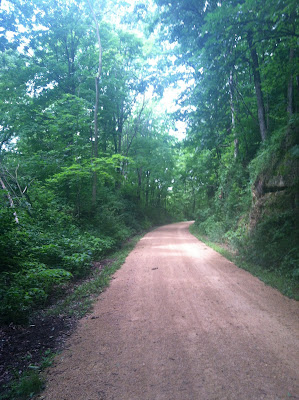 So eventually I made it to the finish none the worse for wear. I sure was glad to drink some water and sit down however. I finished in 4:00:27 not quite sub 4 hours but I will take it. You can see how my pace changed here :
http://jms.racetecresults.com/MyResults.aspx?CId=16370&RId=36&EId=1&AId=32637

I just have a few comments on the race itself. First this race in run for a great cause by a local Dubuque Iowa family and small business owners. They donate money raised to local military families. You can see they obviously feel very passionate about this. So please don't take this as anything but constructive criticism because I have nothing but respect for their efforts.

The race has progressed to the point where the aid stations need to be more organized. I saw many people throwing small water bottles on the side of the trail. This irritates the crap out of me. Simply placing a trash can a few 100 meters down the trail after the aid station would probably stop most of this. Once again the road runner mentality and just ignorance of custom made this happen. Educate people to be good trail runners.

I understand this was the first year for chip timing and I think it went ok, however having it on your wrist was a huge distraction. Normally these sorts of chips are worn on the ankle and the runners cross a timing mat. Having to touch your wrist to a box as you passed the checkpoint and at the finish was annoying. Next year I suggest timing mats. I understand if they are more expensive but maybe JMS will cut you a deal ( he said with tongue firmly in cheek). Anyway that was a good race and I had a good time. I will probably run it again next year.