So my buddy Rob asked me a few months ago if I wanted to do an adventure race with him as a 2 man team. I had always wanted to do one so I said sure. This particular race was a beginner level 8 hour race that was in a county park about 2 hours from my house. I didn't prep much for it, actually I didn't prep for it at all other than getting my mountain bike tuned up prior to race day and packing the mandatory gear. On the day of the race I woke up at about 0400 and drove to Rob's house and we left at about 0500 for the 0700 packet pickup. Race was to start at 0900 but we wanted to get there and check out the map and plot the course etc. This race was to be a combination of Trek/Orienteering, Mountain Bike and Canoe. Distance and course was unknown until you showed up.

When we did show up we got our race packets, which had our maps in it and checkpoints. We learned there were 30 check points split between 2 trekking/orienteering, 2 bike and 1 canoe leg. Rob had spent a lot of time outdoors but he designated me as the navigator. So why he was pumping up bike tires and getting gear ready I plotted all 30 points on our maps. Although I was pretty confident in my navigation skill, it is perishable, and the civilian map system and 1:24,000 and 1:15,000 scale befuddled me for a minute until I figured it out. 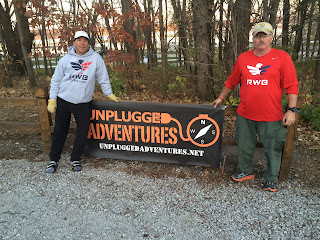 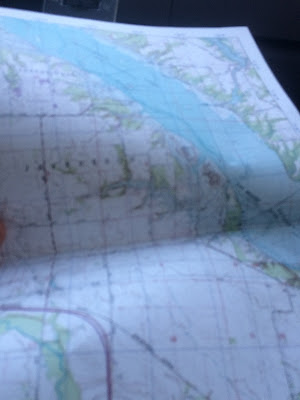 Our required gear such as space blanket,fleece,compass,water,food,headlamp,waterproof jacket,fire starter,bike inner tube,patch repair kit probably weighed about 15 lbs. I had mine packed in a Camelbak Mule pack I had left over from my military days. Once it got close to start time the Race Director gave a short speech and handed out our "passports". These were the cards on which we would punch each check point when we go to them. Most of the check points were marked with orange and white squares but some had no markings. On our coordinate sheets were clues such as kiosk or reentrant ( civilian for draw.. Who knew?) for each checkpoint. The national anthem was played on a loud speaker and we were off. A lot of people started running but we were in it for the whole day so we just started walking. I was just getting my navigation legs back trying out my new compass and this civilian navigation technique. The first section had 4 checkpoints. It took us much longer than it should have for a few reasons. One was  the distances were much shorter than I thought, we actually walked by a few points because I thought we had to go farther. Also I had misplotted a point and we had to go back and find it after walking right by it. Anyway we eventually got all 4 points and we hit the mountain bikes. 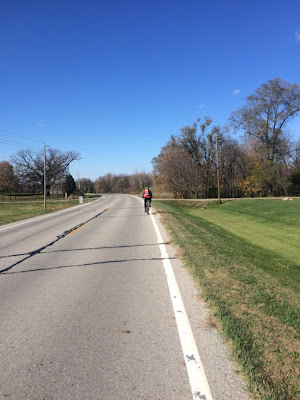 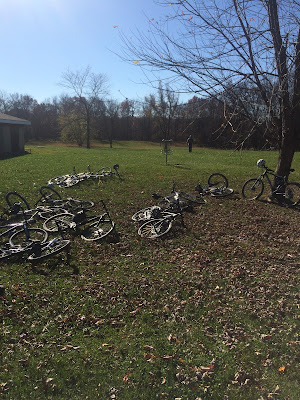 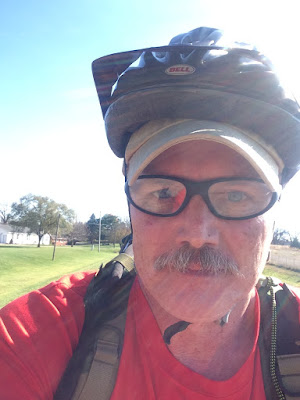 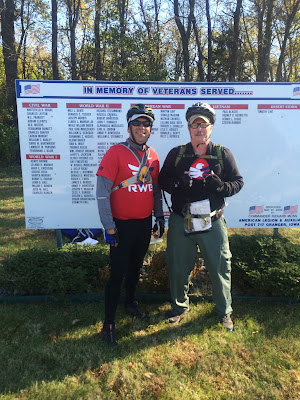 The first mountain bike leg was pretty easy. Hit 3 points on the way and it was all road so we made pretty short work of it. I guess it was about 6 miles. The we rolled into the second trekking leg at another park. It looked like much rougher terrain and honestly I was a little worried about my rusty navigation skills. But I decided to say fuck the compass techniques and use good old attack points and terrain association just like the old days. This technique worked pretty good as I would get a general azimuth and just terrain associate until I figured we were close then we would just start looking. We only had to backtrack once and made some good time on this section hitting all points. When we got back to our bikes we had been moving about 4 hours. So we stopped for a little chow out of our packs. We also had to participate in a challenge which included water balloons and a sling shot in a closest to the pin scenario. Once we were done we got back on the bikes for the second leg. This bike leg was a little harder as it was longer, probably about 10 miles and also straight into a head wind. We had to find 5 points, some on the highway and some on a mountain bike trail. This leg probably took the longest just because of the distance. Once we got back to the start/finish/transition area 3 we had to get our flotation devices and paddles and head for the canoe. This is where our race went south for a bit. As we were shoving off someone flipped our canoe and we both fell into the lake up to our eyeballs. Rob said it was me but I cannot confirm or deny this rumor.Anyway we took a minute to change into what dry clothes we had and pushed off again. The wind affected our speed on the way out. Also my lack of efficient paddling. Anyway we snagged 2 out of the 3 points on this leg and decided discretion was the better part of valor and we headed back for the last trekking leg. 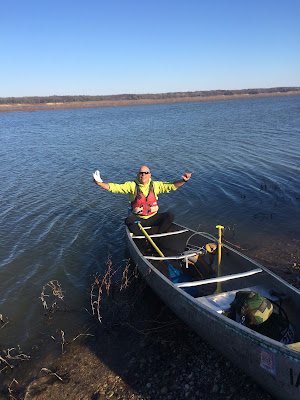 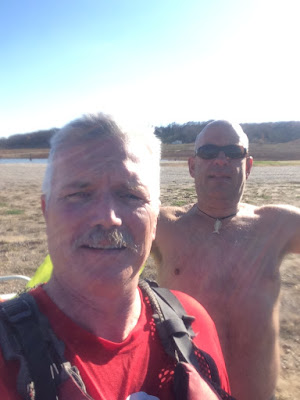 We picked up the map for our last leg and we had about 2 hours 15 minutes before the time cutoff. We had 6 points left to get. So we started out. I didn't even plot an azimuth we just shot it with the compass and headed out. We managed to pick up 2 more points before we figured we should head back because of time. We blew off the 2 farthest points and grabbed the 2 closest to the finish in 7:32 with 26 out of 30 possible points cleared. Not bad for two cherry racers. 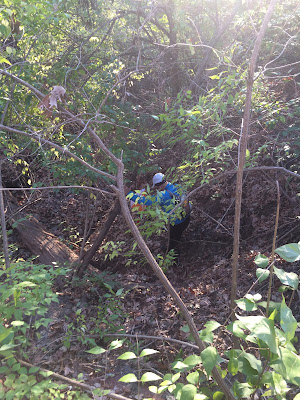 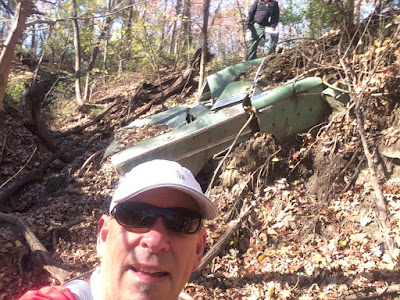 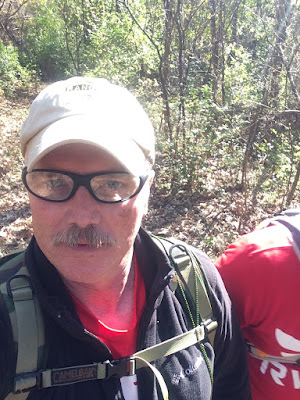 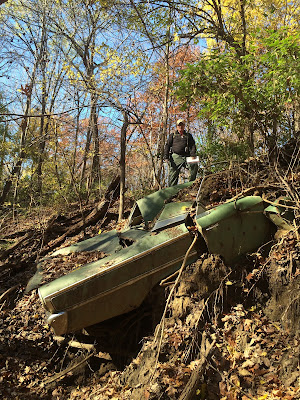 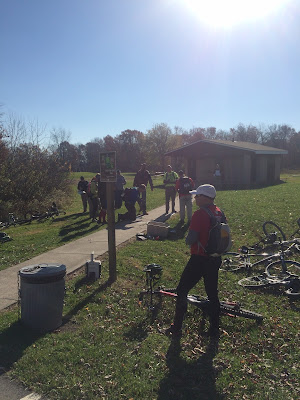 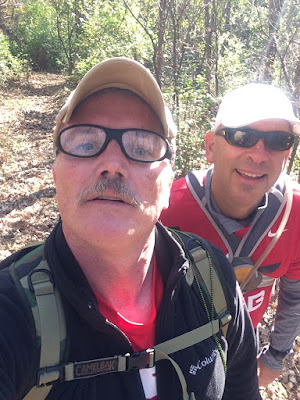 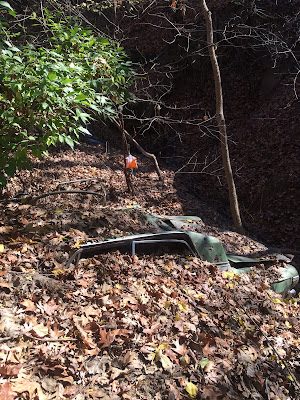 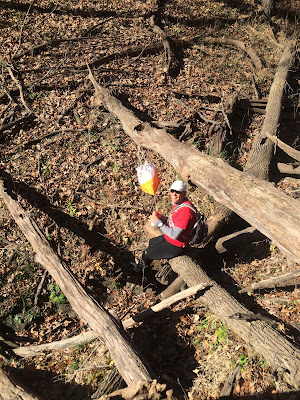 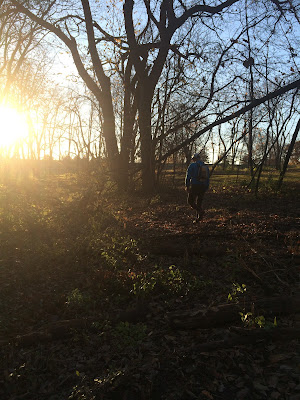 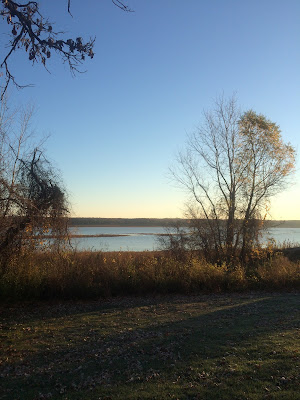 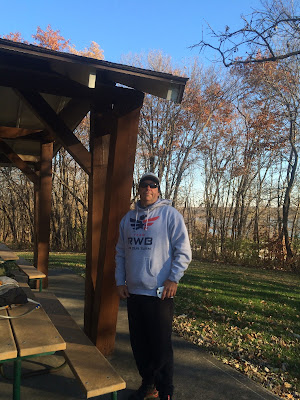 I had a lot of fun at this race. It was a good workout and a blast even falling in the lake. I brushed off my rusty navigation skills and I plan on doing another one in the spring.