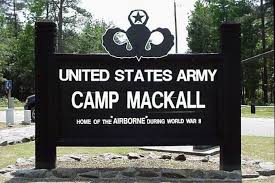 I was on a closed Facebook Group I belong to the other day and another member posted a picture of excavating equipment tearing down the berm walls of the old rifle range at Camp Mackall NC. Camp Mackall was a very busy auxiliary base of Fort Bragg during WWII and housed 3 Airborne Divisions. Its claim to fame since then is that it is the location for various parts of  the US Army Special Forces Training. SERE,SFQC and the Special Forces Selection and Assessment Course are all held, at least in part at Mackall.

And this is why that picture had such an impact on me. It was like seeing your childhood home or your elementary school demolished. Nostalgic and sad. That rifle range was the location for an event in my life that I will never forget. When my life flashes before my eyes I will see this moment. In 1990 I was a Ranger Qualified E5 Sgt from the 10th Mountain Division trying to make the big leagues. I had already survived the land navigation/PT portion of Selection and had moved on to "Team Week." During Team Week candidates were grouped into small units of 10-15 and given tasks that seemed insurmountable. Usually these tasks involved moving something heavy over long distances. 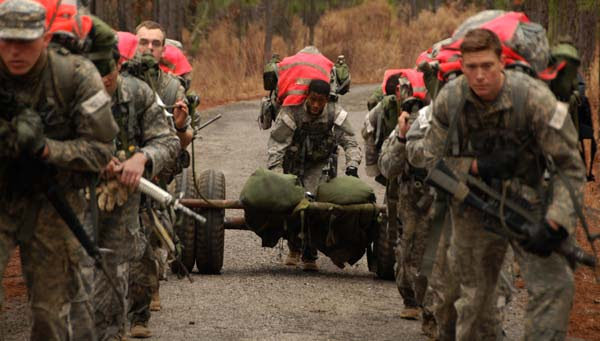 Candidates carried,pushed,pulled or dragged these items for unspecified distances for an unknown length of time. At all times the candidates also carried the proscribed packing list of at least 50 lbs in a large ALICE pack and a "rubber duck" replica of an M16 rifle. To be out of arms reach of these items at anytime were grounds for dismissal. For each task a Team Leader was chosen. The Team Leader was supposed to organize the team and accomplish the task as efficiently as possible. Since no standard other than "Do your best" was ever given everything was done at maximum velocity in fear that the standard would not be met. Of course the Cadre were looking for those that could work as a team under physical and mental stress. They were also looking for those that folded under pressure and didn't shoulder their fair share of the burden. They were looking for those that bickered and did not pitch in. Those individuals would be weeded out before they ever got to a team room.

So that brings me to the "SandBabies". The task was simple, move an unspecified number of sandbags up and over the steep side berms of three rifle bays to the other side of the range complex. The berms were probably 20-25 feet high mounds of dirt. They were steep and time had covered them with grass and trees. Something like this:

We had to fill the sandbags until there was no more than a fist of space between the sand and the top of the bag. A few entrenching tools and a pile of sand were provided on one side of the range complex. We needed to move sandbags quickly and efficiently to the other side. If they were not full enough we were to carry them all back, dump them out and start over. We started with a team of 13.

Initially I filled 4-5 sandbags and threw 2-3 on my ruck and carried one in each hand. Up and over the first berm and my heart was in my throat. This was going to suck. Down the other side, a crossed the adjacent range and over the next berm and the next and the next until we came to the other side and placed the sandbags on the ground at the Cadre's feet. Not full enough take them back. Back a crossed the berms to the other side were the bag were dumped out and refilled. So it went for what felt like an eternity. Honestly I still don't know how long we moved these sandbabies but it was hours at the very least. Back and forth sometimes we were allowed to drop our bags and trudge back over the berms with just our ruck and weapons. Quite often though we were sent back to dump them out and try again. Always we had the spectre of the "standard" looming over our head. Were we to slow? Not enough sandbags? When could we stop?

Sometime over this course of this torture by sandbaby we were told that 3 of our fellow team mates had DRO ( dropped on request). They had quit. The standard was the standard however. We still had that unknown time to move that unknown number of bags from point A to point B. Being 3 men short was irrelevant to the mission. Over the minutes and hours. My shoulders,hands and legs cramped. I negotiated with myself numerous times that quitting wouldn't be so bad. I could go back to my unit and just ease into my old squad leader job. Things would be good. I would quit at the next opportunity. But when those opportunities came I talked myself into just going for one more trip. Just one more, that was it, then I would quit.

Trip after trip, time became a blur. A blur that is seared in my mind. I can still smell the leaves and pine needles. I can still see the sun blinding me as I looked skyward in an attempt to reposition my rucksack.  4 months  prior to Selection I had undergone tendon surgery on my left hand. It had not fully healed and was betraying me when I needed it most. I could no longer carry a full sandbag with that hand. It was reduced to balancing the bags a crossed my back. And I was forced to carry 4-5 sandbags on top of my rucksack to make up the difference.

And then it was over. As I dropped my load of sandbags, Cadre told me to join the others against the treeline. I wobbled over to the break area pulled out a Meal Ready to Eat and did the rucksack flop with my teammates. Ham Slice had never tasted so good. We ate quickly and re-hydrated, the next task and new Team Leader would be assigned soon.

They can tear it down but the old rifle range will always be part of my life.
Posted by mikemac356 at 13:30