There is a training term in running circles. The term is long,slow,distance and it is what runners do as they prepare for a variety of endurance events usually over 20 kilometers. Due to being closer to 50 years old than 30 I have my own term. It stems from the fact that every year I seem to gain or lose a pound or two but mostly gain. I also find my pace per mile creeping up second by second year by year. When I was a younger man I used to be quite a speedster. I was usually one of the fastest in the company and my personal record for a two mile run was 10:32. At one time I could keep that pace for miles. Now I still enjoy running but I jokingly call what I do fat,slow,distance. I am a fan of John Bingham of "Penguin Chronicles" fame http://www.waddle-on.com/. John's believes everyone can benefit from running if they have the courage to start. So I will continue to run as long as I can move on down the road. 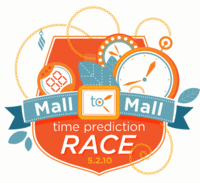 One of the races I ran this month was the Mall to Mall prediction race. This race is an 8.8 mile race between Lindale mall and Westdale mall here in Cedar Rapids. The cool thing about it is that it is a prediction race, you don't have to be the fastest to win you just have to be the best guesser. You are not allowed to wear a watch or ipod or anything that could help you keep a pace artificially. Since the course was an open course meaning no traffic would be stopped I was pretty conservative in my prediction. We started off at 0800 on the morning of the race on a nice spring day. The first part of the run took us through a cemetery for about a mile until we came out onto the main drag in Cedar Rapids, First Avenue. The course was flat and somewhat down hill for the first half. We continued down First Avenue eventually crossing over it and turning right on Third Avenue. The course took us through what I jokingly call the "ghetto." Compared to larger cities this area is nothing but in our city it is truly the ghetto. If there is a shooting in town you can bet it will be somewhere in this area. Most people blame it on the influx of welfare recipients from Chicago looking for a free Iowa handout. I am not sure I agree but I do know that on this particular day everything was quiet I guess all the criminals were still in bed. Once we crossed the river we started heading back up hill, the course took us on a detour through the Cedar Rapids Kernals ball park. The Kernals are the Class "A" affiliate of the Anaheim Angels and we got to run a lap around the warning track before exiting the stadium. Once we left the stadium we turned on to Wilson Avenue at this point I knew how far we had left because this was near my house and I often did training runs on this street. I had been holding a pretty steady pace this whole time but knowing where I was at I picked it up a little and started passing people as we went up the last major hill. We crossed over Edgewood Road and into the parking lot of Westdale Mall. As I crossed the finish line my time was 1 hour 19 minutes and 36 seconds this worked out to 9:02 minutes a mile. I had seriously underestimated my own speed and had run the race over 19 minutes faster than my predicted time. Oh well, the bananas and bagels at the finish still tasted good.

The next race for this month was the Rockford, IL. 1/2 Marathon (13.1 miles). I picked the location due to the fact my daughter's boyfriend lives in Rockford and I was looking for a race within 4 hours of home. I was only doing the 1/2 Marathon on this day because my knee had been acting up and I hadn't had the time to train for the full. On the day of the race I woke up at 0445 got dressed and grabbed the 0530 shuttle from the hotel to check in and get ready for the 0700 start of the race. Before the race I tied and retied my shoes, fiddled with my walkman, and stood in line at the Porto Potties. Finally it was race time,the sky was gray,overcast and the temperature was about 54 degrees. This was actually good running weather, and I was hoping to finish the race in 2 hours or better. The airhorn sounded as all 1200 runners started the shuffle to the start line that is normal for these large races. I finally made it to the official start about 45 seconds after the actual clock had started. No worries though since we all had individual chip timers on our shoes to keep an accurate time as we crossed electronic sensors at various points along the course. The biggest problem I have when racing is running my own race, I tend to let the spirit and adrenaline of the event trick me into starting to fast. The ideal race is one with a negative split which means you run the second half faster than the first,unfortunately this race was no different than any other and I found myself starting too fast. I finished the first mile in around 8 minutes and I knew I better slow down so I wouldn't slow down even more at the end. I was right on track and cruising along for the first 3.5 miles before we hit the first hill. This hill went from 3.5 miles to about 5 and was a long continuous grade. I concentrated on keeping a 9 minute mile pace and trying to ignore people I passed or even harder the ones that passed me. At mile 5 we went back down hill and then back up again before we entered a park and did a loop around a small pond. As we exited the park we hit mile 7 and I looked at my watch and saw I was at 58 minutes. I was on pace for a sub 2 hour race. The second half of the race was mostly flat or down hill. I really concentrated on my pace but about mile 9 I started having some issues with my knee and my left hip. The hip problem stemmed from what I guessed was an uneven gait as I was favoring my left knee somewhat. I also suspected the problems were because I did most of my training runs on a gravel road or on trails and this entire race was on pavement. The pounding on this hard surface was slowly wearing on my legs. At mile 12 I was at 1 hour 48 minutes. I had 12 minutes to run the last 1.1 miles. I kept moving forward and as we made the last turn I could see the large banner marking the finish line. I looked at my watch and poured it on for the last 200 meters. I crossed the finish line at 1 hour 59 minutes and 1 second, 59 seconds under my goal and a 9:06 per mile pace. I liked this race, there was plenty of water stops.One every 1.5 miles and 2 aid stations along the half marathon route. There was also plenty of encouragement along the route as it was all in town allowing for many spectators. I will probably do it again,maybe doing the full marathon next year. Next on the agenda is the Five Seasons 4th of July 5K.
Posted by mikemac356 at 20:56