Memorial Day: Me and Jerry 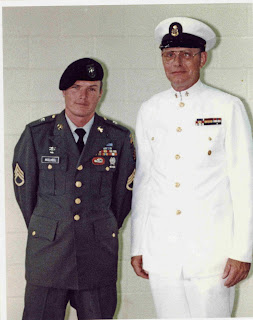 Memorial Day is a day when we remember those who gave service to our country whose time on earth is through. For some it has become a day for BBQ and beer drinking. For those that have loved one's that have served however it will always be a day of remembrance. The first veteran I think of on Memorial Day is my Uncle Jerry. Jerry spent 28 years in the Navy, Active Duty and Reserves. He served during the Vietnam Era and beyond retiring as a Senior Chief Petty Officer in 1992.

Jerry is my Dad's brother and he and my Aunt Carolyn always treated my children and my wife as an important part of their family. On Christmas no matter where I was you could always count on the fact that Jerry and Carolyn would have a present for my children under our the tree. Jerry always liked to tease my wife and she thought he was a very good man. She was very sad when he passed.

As for myself Jerry was always extremely interested in my military career and how it was progressing. He would quiz me on the times when I came home on leave on what I had done and what I was going to do. and when I was promoted to SFC (E7) he was almost happier than I was. Being a Navy man making E7 for Jerry was a sign that you had made it. Navy E7's (Chief Petty Officers) cross the line from junior to senior enlisted. Navy E7's enjoy different uniforms and perks on board ship that the lower enlisted do not. I remember the time I got Jerry laughing when I told him how my Special Forces ODA was doing some Military Free fall training with Seal Team 10 at the Naval Air Station in Rota, Spain. During this trip it was quite comical to watch my friend Terry who was an E6 at the time try to sit in the Chief's area in the Dining facility or try to get a room in the Senior Enlisted Quarters. Terry tried but the Navy would have none of that. 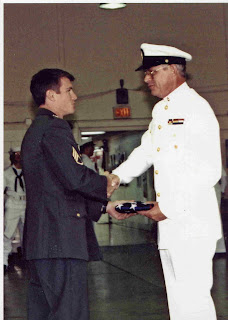 Jerry retired from the Navy in 1992 and he requested that I be at his retirement ceremony and present him with his flag. It was an honor I will never forget. When I retired myself in 2004, Jerry made the trip to witness my retirement just as I had witnessed his 12 years before. It was sitting in my garage after the ceremony when Jerry joked with me "now you will have to get a real job!" I indignantly replied that in my opinion I had been doing a real job for the last 22 years. He just laughed and said " You'll see."
In the military you can get an instant history of a man just by looking at his bearing, the badges on his chest or the unit patch on his shoulder. You know where in the hierarchy of things he is just by looking at the rank on his sleeve or collar. Civilian life is not like that and sometimes figuring out where you stand can be confusing. That is what I believe my uncle was talking about. Jerry you were right and I now know exactly what you meant.

Tomorrow when I go to the annual Memorial Day Ceremony, I will be thinking of you Jerry..Blue Skies always and see you on the high ground