There Is a Little Nerd In All Of Us 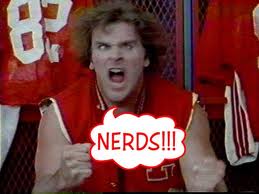 I was teasing my oldest son earlier today about the fact he likes Japanese Anime ( I mean really likes it) and how that makes him nerd. He attends conventions, costumes,videos you get the picture. He countered with the fact that I plan my weekend around any new Doctor Who episode and how I used to do the same thing about LOST or Star Trek. This is all true, I am a sucker for Science Fiction always have been. The point I got out of the whole conversation was that everyone has a little nerd in them.

This nerdiness is exhibited whenever anyone talks excitedly about any subject while everyone else kind of looks at them and nods their head. My family does this when I talk about any number of subjects such as football,wrestling,baseball,shooting, Doctor Who, skydiving, running, or the Red Green Show. My eyes glaze over when my kids talk about Twilight, Anime, Harry Potter (Ok not Harry Potter).

We need a little nerdiness in our life, every person is the sum of their parts and without the balance of nerddom to keep us Former Action Guys on the straight and narrow our heads would swell. Being a nerd is like eating your favorite candy bar, so good but you feel a little guilty about it. Well nerd on my friends as I get older the nerdier I get.
Posted by mikemac356 at 19:22