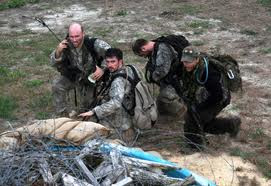 Late in the fall of the year 1990 I participated in the liberation of Pineland. Pineland is a country whose boundaries coincidentally exactly match those of the in . What is not a coincidence is that this country is liberated several times a year by student “A” teams from the Special Forces qualification course. These students along with their “G’s” liberate the oppressed peoples of Pineland and have been doing so for over 50 years. It was my turn as a member of class 8-90.
Having finished phases 1 and 2 which were the common skills and military occupational specialty phases the students in my class once again came back together to form student “A” detachments. We parachuted into the fictional country of Pineland via CASA 212 aircraft and hooked up with our auxiliary and made contact with the guerilla forces we would be organizing and training to overthrow the despotic government of Pineland.
Our infiltration was delayed by the fact that one of my classmates was killed during the parachute jump and all activity went “admin” until they had the situation under control. We as students didn’t get to hear much until after we were extracted later on but apparently he broke his pelvis while conducting a tree landing. The pain was so bad he released his leg straps before the chest strap on his parachute harness and hung himself on the chest strap.
We found this all out later, as we spent the immediate 12 hours after infiltration being led hither and yon through the countryside by our guerilla guide. Eventually we stopped and established a patrol base. The next morning we hooked up with our “G”s. Normally these role players would be made up of support troops from COSCOM or some other Ft Bragg unit with the G chief being a experienced Special Forces operator. In our case however our G’s consisted of local town’s folk because with Desert Shield going on over in the , soldiers were in short supply. In retrospect I almost think this was better as I got the full effect of teaching weapons and tactics to a bunch of individuals that had no clue what I was talking about initially. We spent a few days in the woods drilling them until we decided it was time for our first mission.

Our first target was a confidence target where we ambushed a squad of OPFOR (opposing forces), you should have seen the grin on my M60 gunner as he let the bullets fly (blanks of course). He was about 12 years old and he is probably still talking about it. Shortly after this ambush our auxiliary decided to test our “loyalty” to Pineland. As a token of their esteem they presented us with a live possum in a sack. They insisted it was a delicacy and that we should eat it. After they left we had a long and heated discussion about the best way to cook and eat a possum. Unfortunately no one in our squad had ever eaten one although we all had skinned various animals before. Well our discussion was all for naught as the damn possum managed to escape from the sack and when we went to get it was looking down at us from the top of a large pine tree.
Later that night the auxiliary sent some guerilla fighters to pick up myself and the student team leader for an “area command” meeting. We left the rest of the team and our guerilla force manning the perimeter as we marched up the red dirt road to the edge of a clearing in which a house set. They then pulled sandbags over our heads to blindfold us and stuffed us in the back of a pickup truck. They drove around for about 45 minutes in an effort to confuse us but I managed to sneak a few peeks from under the sandbag and could see that we were just driving in circles up and down the same dirt roads. Eventually we parked in the yard of the house we had originally started from. I nudged my team leader and whispered to him that we were only about 100 meters from our original start point shortly before they took the blindfolds off and marched us into a darkened garage. 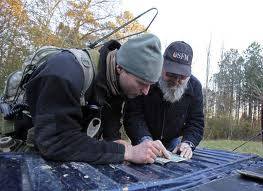 Inside the garage were about 15 bearded and scruffy looking freedom fighters sitting around a large card table. Hanging on the back wall was a large Pineland flag. Sitting on the table was a bunch of candles which provided the only light. The leader of the auxiliary motioned for us to sit and then introduced all the various guerilla commanders and auxiliary dignitaries. He then proceeded to interrogate us on our loyalty to Pineland and what were we going to do for them.
We talked about the training and missions we had conducted up to that point. We assured them that we had every intention as representatives of the military to see that Pineland was liberated. We then spent about an hour haggling over the amount of money they would be paid for their assistance, with the auxiliary trying to soak us for more and more of a bribe. These role players had the advantage as they had been doing this for years and probably knew down to the penny how much Pineland “don” that student A teams where issued upon infiltration. Trust me they were trying to get a hold of all of it.
Eventually the talk turned to our possum and the delicious meal they had provided us. It was made very evident by gestures and body language that it would be taken as a grave insult if we had not eaten the gift. So what was a novice Green Beret to do in this situation? Well I looked them straight in the eye and lied my ass off. I talked in vivid detail about how we prepared the possum and consumed its every delectable morsel. The auxiliary commander looked back at me and I knew that he knew that I knew that I was lying to his face. After a moment of silence he produced a jar of moonshine from under the table and announced that we would toast to the liberation of Pineland. As they passed around the jar I snuck a peak at the cadre/evaluator that had followed us to this meeting. I knew it would be disrespectful to decline to make the toast but I was also worried I would get in trouble for drinking while on duty as a student. Well once the jar came around to me I figured what the hell and took a long swallow of the white lightning.
After not drinking alcohol for quite a while and eating nothing but MRE’s for the last month, the moonshine went straight to my head. All I remembered for the rest of the evening was that they blindfolded us again and drove us around in the pickup truck before dropping us off right back where they picked us up. I stumbled back to my sleeping bag and slept off the booze until the next morning. 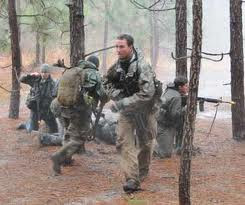 We continued to conduct missions, surveillance, ambushes and raids for a few more weeks until we were exfiltrated back to for stand down and graduation. The intricacy of the exercise that is “Robin Sage” is too much to chronicle here but trust me when I say that everyone from the town police to the local librarian and everyone in between participates in this exercise when it is conducted. It is about as close to operating in a foreign country as you can get and still be in the . Several years down the road I found myself in some eerily similar situations when negotiating with Serbians and Albanians in Kosovo or Pesh Merga fighters in . It was then that I learned the value of this realistic training. 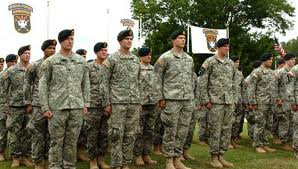