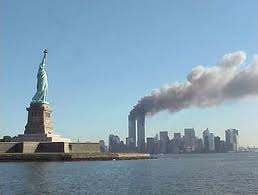 9.11.01 has become a symbol of many things to many people in the last ten years. But what it undoubtedly has become to many of us is the "where were you moment?" of the rest of our lives. Many people in an older generation often remembered where they were when President Kennedy was shot ( I was 2 months old not sure where I was) or what they were doing on Dec 7 1941 "a day that will live in infamy."

My experiences on Sept 11 2001 are unique to me but probably mirrored the confusion and sense of helplessness that was felt by people all over the United States and the world. On that day I was a newly appointed Team Sergeant for a Special Forces Military Free Fall ODA in 10th Special Forces Group. I had recently done a permanent change of station move from the 1st Battalion of 10th Group in Stuttgart, Germany to my current station of Fort Carson Colorado. My team was conducting a 72 hour isolation exercise at the Group ISOFAC (isolation facility) in preparation for a training mission to Montana. On that morning I had sent the rest of the team to eat breakfast at the mess hall while I stayed behind to guard our equipment and plan for the free fall jump we were going to conduct into the training exercise.

Sometime after 0900-0930 my team members started filtering back into the ISOFAC and started telling me about news footage they had seen of a plane flying into a building in New York City. At the time I imagined it was a small plane of some kind that had been involved, this sort of thing was not unheard of. Being in the ISOFAC by design we were cutoff totally from outside contact, that was part of being in isolation. So between my teammates somewhat jumbled story of what had happened and the fact that I had not actually seen anything myself, I really didn't think it was a big deal. Just another tragic accident.

We continued to plan for our mission brief back until sometime later our Company Sergeant Major entered our isolation bay and told us that the training mission was cancelled and to gather all of our equipment for a return to the Company area. He didn't have much information, just that trucks would be here soon to get us and that there had been some kind of attack in New York City. We gathered our equipment and personal kit and started speculating on what was going on. Eventually some trucks showed up and we loaded them up and walked back to the company area. We saw other teams that had been in isolation doing the same thing.

When we arrived at the company an organized chaos was occurring. Things were not totally out of control because the military has a routine and a structure. The organization will continue to operate, moving forward even in the midst of confusion. What was missing at this particular moment was information. As we unloaded our gear back into the team room I still had no idea what had happened. After we got our gear in the team room the Company Commander called a meeting of Team Leaders and Team Sergeants in the conference room. When we sat down around the table we could see that something was very wrong. Our CO told us that there had been an attack on the World Trade Center in New York City by an unknown assailant or group of assailants. He told us that 2 planes were involved and the Trade Center was in flames (actually I found out later by this time they had already collapsed). He said they would be shutting down all access to the Post except for one gate and that all people entering would be subject to a thorough search. All schools on post and in the area were also dismissing immediately. He then told us that we until we got further orders that we could dismiss our team members for the day so they could take care of their families.

Like many others my main concern was for my children. As I mentioned before we had moved to Colorado less than 2 weeks before and we were still staying on post in temporary quarters. My wife and son were in our room at the BEQ but my daughter had started her first week of school. She was at an elementary school off post and it was my mission to go get her and get her safely back on post. I hurriedly called my wife to see if she was OK and she started to tell me that she was watching the news and that planes had destroyed the World Trade Center and also hit the Pentagon.She said that there was video of people jumping out of the buildings to escape the flames. I told her to stay in the room and I was going to get our daughter and I wasn't sure what would happen next.

As I drove our mini-van out of the Group compound I could see they were already stringing concertina wire across the compound's avenues of approach and troops with squad automatic weapons and M240B machine guns had parked Humvees in the road,creating road blocks. Contingency plans were already being set in motion. I raced towards the south gate not sure if I would even be allowed to exit. Meanwhile MP's and other soldiers where stationed on the side of every road facing out in a defensive posture. I exited post with little issue and made it to the school. I parked and went inside to pick up my daughter who was waiting at the school office. The school was as chaotic as you would imagine with all the military and civilian parents trying to find their children and get them safely home. Once I got my daughter in the van I headed back on the short 2 mile drive to the gate I had just exited.

However traveling this 2 miles would take me the next 5 hours of my life. Almost immediately upon turning on to the road that went back on post we came to a halt. Then we inched forward literally a few feet every 20-30 minutes as traffic was funneled into one lane and each vehicle underwent an exhaustive search of it and its occupants. I won't bore you with the details but just imagine if you will listening to conflicting radio reports for hours while trying to entertain a bored 3rd grader in  a van on a warm September day. Throw in the fact we had no food and water and things became very interesting. Eventually it was our turn to be searched. Suspicious MP's checked my ID even though I was in uniform and asked my why I was coming on post. I told them my story of picking up my daughter and the fact the rest of my family was in temporary quarters.They then proceeded to tear apart every inch of my vehicle utilizing dogs and mirrors to check inside,outside and underneath for bombs. After about 20 minutes I was allowed to proceed and I made my way straight to the room. The reminder of the day is a blur as I tried to procure some food for my family who was living out of a suitcase. At the same time I was trying to find out what was going on back at the unit.

We fell asleep from exhaustion later that evening and the next morning I woke up to find school cancelled. That was a good thing as I had no idea if I would be able to take my daughter there anyway. For the next week or so I reported to work and returned home. No training, no jumping, nothing was happening as there was a moratorium on flights and  guidance was slim. Rumors abounded of deployments and operations to be assigned. Eventually 5th Special Forces Group took the fight to the enemy in Afghanistan. By November my team was in Uzbekistan conducting counter terrorism training with the Uzbek Spetnatz. For the next 3 years, until I retired, the events of Sept 11 would plunge me into a cycle of deployment and refit that had me visit Uzbekistan,Kosovo and Iraq.

On Sept 11 2011 I will remember where I was and all the things that happened to myself and my teammates because of that day.