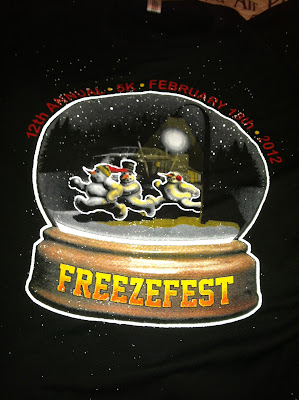 The Freezefest is a run I have done annually for at least the last 3 years. I have made it my traditional first race of the year. I knew this year's race had potential to be a good one as we have had a very very mild winter..very "un Freezelike." I had also been running very strong the last few months as I continue to train for some ultramarathons I am doing in the spring. Last week I ran a sub 48 minute 10K for the first time in my post military life (I retired from the military in 2004). I was excited and a little nervous about the chance to run the fastest 5K I have run since I turned 40.

The day of the race was very mild with a predicted temperature in the 40's. To keep with my training schedule I had to complete a 90 minute run on race day so I arrived about 0900 for the 1100 start. I also broke with tradition and did not eat my normal pre race breakfast of honey bun and Gatorade. I picked up my race packet and then returned to the car. I dropped my stuff off and went for a very easy 60 minute run. The race is held in the Squaw Creek park so I explored the trails around the park and finished about 5 miles prior to the race commencing. 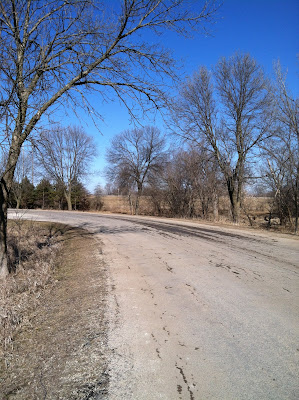 After I finished my warmup I visited the portopotty and milled around for about 15 minutes with the other runners until everyone started moving towards the start line. Uncharacteristically and in anticipation of trying to run as fast as I could I self seeded in the front third of the group of racers. As most of you know I usually start at the back but not on this day. Shortly after we lined up the command to go was given, I hit the timer on my watch and off I went.

I started off quickly and thanks to my warmup my knee wasn't stiff as it usually is during my initial start. The course headed east on a paved service road for what I guess was about 3/4 of a mile. I was feeling good and picking people off little by little. After 3/4 of a mile we made a turnaround and as I approached it I was happy to see that I was still in the top third of racers. I glance at my watch and it was about at 6 minutes. The course had no mile markers so I wasn't quite sure of the distance, I just guessed based on previous experience.

We headed back west on the same road , passing back by the long line of runners that had not made the turn yet. I knew we would have to run back past the start and then continue on for about another mile before turning again and heading back to the finish. It was during this long section that I concentrated on maintaining my pace. I kept telling myself to run tall and keep turning over my feet. It was also during this section where people started settling into their pace. I would pass and be passed several times by the same two people for the rest of the race as we pushed each other. At one point during this section I actually felt like I was running downhill on the flat course.

Eventually we curved back east on the road and passed the "cowbell guy" who every year at CVRA events cheers on the runners with his boombox and cowbell. We continued on east to the turnaround when we headed back towards the finish. I was starting to smell the barn as I could actually see the finish line off to my right as the road curved back around the park. I looked at my watch and it read 20 minutes. Based on the distance left I was pleased to discover I was going to beat my goal time of 24 minutes by a pretty sizable margin. I just didn't know by how much. The course turned right into the parking lot for the last .1 mile to the finish. I could see that the official timer was reading 21 something so I really pushed it hard up the small incline to the finish in hopes of running the race under 22 minutes. Unfortunately it was not to be as I finished in 22:03. 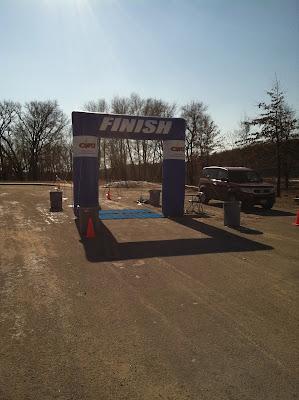 I was very happy with my time and thought it was a post military PR, however after I arrived home I discovered I had run the CC Rider 5K in 20:37 back in 2004. Oh well it is definitely the fastest 5K I have run in the last 7 years. Looking forward to a definite PR at the Hawkeye 50K coming up next month
Posted by mikemac356 at 19:41