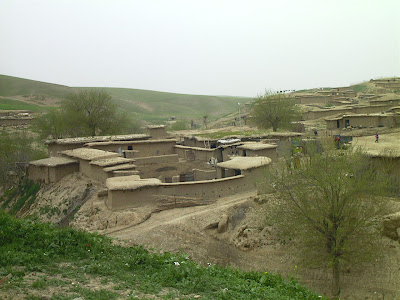 Dogs are man’s best friend so the saying goes. Here in ‘Merica dogs are for a lot of folks part of the family. I have three dogs myself and consider myself a dog person. I am not the only one that feels that way and throughout my military career the different units I was in had an assortment of adopted and befriended canines. We seemed to pick up one of theses furry guys everytime we stopped long enough to make a semi permanent base of operations.
The first dog I can remember adopting as the unit mascot was when I was stationed in the way back in the stone age of the early 1980’s. This mutt was the typical Middle Eastern yellow skinny dog. The same dog I saw all over the many many times and in many countries. This particular dog was a permanent fixture at the outpost on the top of the mountain on an island in the middle of the straits of Tiran in the . We used to feed this dog our left over C-Rations and it lived high on the hog. When my Special Forces team was running operations out of a house in the Kosovo town of we had another dog. Typical yellow mutt and we feed it left over dog food that we grabbed from the Military Police. They had expired dog food that they wouldn’t feed to the military working dogs but it was fine for our mascot.
When my SF team deployed to in 2003 we set up a patrol base in the . We were running reconnaissance missions and calling in airstrikes on the Iraqi military that had formed a defensive perimeter around the city of and its strategic oilfields. On one of our area reconnaissance missions we came upon a complex of abandoned Iraqi trenches and fighting positions. We dismounted from the Land Rover Defenders we were using as transportation and methodically cleared each trench and fighting position. As we got towards the ends of the fortified area one of my medics gave a holler and we looked to see what he wanted. We hadn’t found any Iraqis but he had found three black and white puppies that were all huddled up in the bottom of one of the fighting positions. 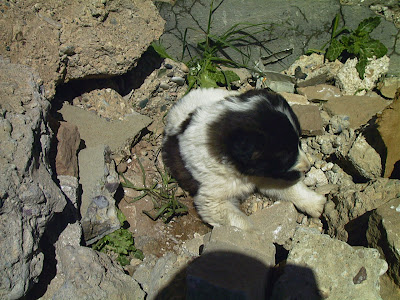 It was our best guess that these little guys had been abandoned by their mother or she was killed during the bombing that had happened in the area a few days prior. Being the good SF troopers we were we immediately adopted these furballs as our team mascots and loaded them into the back of one of the vehicles. Our interpreter was also sitting in the back of this vehicle and started to complain about the dogs. Muslims believe dogs are unclean animals and do not keep them as pets as a general rule. Being the culturally sensitive guys we were my Senior Weapons Sergeant told him to shut his pie hole or he, not the dogs, would be walking back to the patrol base.
As we made our way back across country to Klawkut we saw a lone vehicle headed in our general direction. As it moved closer and we could not identify it as friend or foe we pulled our vehicles into a defensive posture. The approaching vehicle stopped and two individuals dismounted in traditional Kurdish garb. They were about 200 meters from our vehicles and made signs for us to come forward and talk. We made the decision to put our crew served weapon on the high ground to our left in an overwatch while our Team Leader and the interpreter moved forward to talk to theses individuals. The rest of the team would also provide supporting fire from the cover of the vehicles.
As our Team Leader moved forward I had my sights trained dead center on the chest of the first mystery Kurd waiting for him to make a suspicious move. As I waited for the little drama to unfold I could hear our new found companions whining and scuffling in the back seat of the vehicle. As it turns out these individuals were just some Peshmerga who were trying to rejoin their unit and they gave us a friendly wave as they got in their vehicle and continued heading east. 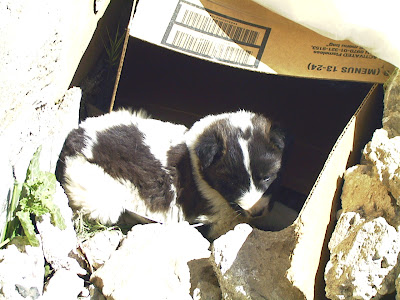 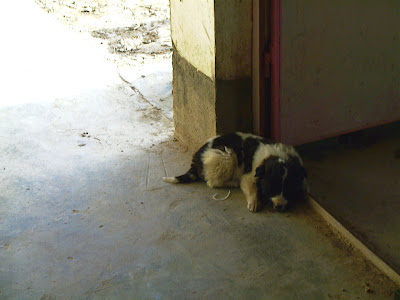 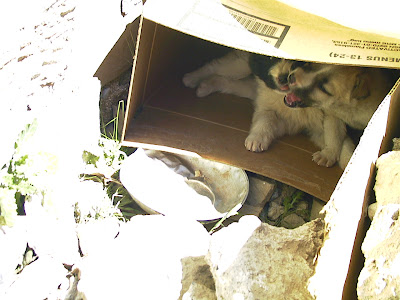 We continued on west to KlawKut and our patrol base. When we arrived we broke open some Meals Ready to Eat and some bottled water and fed our puppies. We made them a comfortable little home out of a MRE box so they could sleep in the shade. As the days went by the started imprinting themselves on us and usually would follow the first team member that left the building we were sleeping in. Our interpreter continued to complain about the fact that they were hanging around but we ignored him as the rest of the Kurds didn’t seem to mind. He was a city boy any way from down south and the Peshmerga we were working with didn’t have a lot of respect for him. 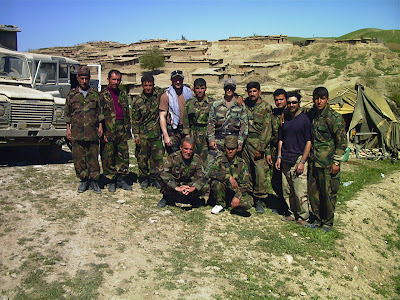 Eventually we had to pick up and move on as the mission changed. When we had to haul ass to occupy , our little friends got left in Klawkut and we never saw them again. That is the way of the mascot though, they are interchangeable to a certain degree, although I still think about them and wondered if they made it through the war ok.
Posted by mikemac356 at 20:50