I decided to run this race at the last minute..at least for me. I registered only 2 weeks before the race when I found out about it from my friend JD. I decided it was a much better fit for my 100 mile training schedule than my original plan of running the Des Moines marathon. This turned out to be a good decision. A muddy sloppy trail race has a lot more specificity than a road race.

The race was held on a Saturday morning and I knew things were going to be hectic based on my usual Modus Operandi of trying to fit 10 lbs of shit in a 5 lb bag. So I officiated a highs school football game the friday night prior, got home about midnight and packed for the race and work the next day. There would be no time to come home after the race. I got to sleep about 0100 and set my alarm for 0430, intending to drive the 60 miles to race start and pick up my packet at 0600. The race was to start at 0800. JD was running the 25K and we had I planned on running a little before hand to warm up.

Well as as usual no plan survives first contact and I suddenly awoke at 0600 and leaped out of bed. Crap!!! I might not make packet pickup that ended at 0730. I threw on my clothes, grabbed my stuff and got in the car. To make matters even better it was pouring rain. I stopped at the gas station and fueled , bought 4 gatorades and some donut sticks. I was then on my way chugging the gatorade and eating the donut sticks.Not the preferred pre race breakfast but it is what I had. I called JD on the way and he picked up my packet for me. So when I arrived at the race start all I had to do was get it from him and get dressed in my car as the rain continued to fall.It was so wet I decided not to take my phone. There would be no pictures this race which was a bummer because I saw a lot of cool things.

The race would be two 15.5 miles loops mostly on single track with a few miles of pavement. The race started in front of a pavilion in a park and headed east into a city park and state preserve. I heard there were 90 some runners registered for the 25K/50K but it looked like a lot less at the starting line. I think a lot of people bailed due to the weather. This was the first year of the event so support was really low key but the swag was awesome. It was sponsored by a local ultra runner and running store owner so he knew what runners wanted.

The race began with literally a READY,SET,GO!!! I hit my watch and off we went.We ran down a paved bike path for about .5 miles then turned left into the woods and hit the single track mountain bike trails. For the first 3-5 miles we would loop back and forth on these trails, crossing the pavement periodically and heading back into the woods. I was maintaining about a 10 minute per mile pace and just concentrated on staying steady. At one point I was leading my little group of runners when we got to a trail intersection. We had been told to keep the flags on the right but one of the volunteers motioned me to head the other way..so I did. I got about 25 yards down the trail when he hollered for us to turn around. So of course now I was at the tail end of the train of runners and lost about 6 places. I slowly made this up however of the course of the next few miles. I hit the first aid station at about 30 minutes but I ran past it as I was feeling pretty good and had plenty of water and gels in my hydration pack.

The rain had stopped by this time but the course was a wet muddy and sloppy mess. It consisted of twists and turns and a lot of little rolling hills. We also hit the occasional sandy spot or steeper hill.
Here is a course preview

At approximately mile 10 we hit the second aid station. I did stop there and got some fluid and calories. I had been running with the same basic group of people but shortly after this aid station I hooked up with another runner named Tim. We talked as we hit some steeper terrain including a series of railroad tie steps. Tim had run quite a few ultras including a 24 hour race. I ran with him for about 5 miles until we hit the berm and bike trail that would loop us back to the start/finish line.

I finished the first lap in 2:29. I spent 6 minutes changing my socks and drinking another bottle of gatorade and was off on the second lap. As is usual on these races the second lap was different than the first. Although the course was the same it felt different. Even though I ran it slower it felt like it went faster. I was pretty happy at my energy levels as I passed a lot of people that had gotten a head of me earlier. My IT band and hamstrings started to bark at me a little bit which probably slowed my pace some. I was in good spirits though and talked to others along the route. With about 2 miles to go I passed the runner Tim who I had been taking to on the first lap. I finished the race in 5:29:59, 10 minutes of my best ever 50K time but I felt like I could keep going strong. As a training run this was a good effort. 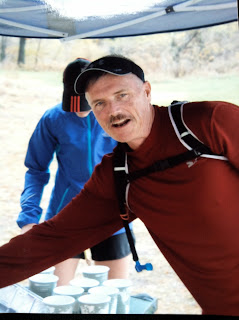