My friend Ross has been turning me on to more of these shorter trail races lately. I enjoy doing them because it keeps me off the road but I can still race. Also in the smaller races I am more competitive. This race was just a little over a 5K and it was held in Hickory Hill park in a town (Iowa City) about 20 miles south of where I live. I had ran in Hickory Hill park before but mostly at night so I wasn't quite sure what to expect during daytime conditions.

I had to work an ambulance shift the night before ( poor planning on my part) and we had a call early in the morning so I didn't get a lot of sleep the night prior to the race. But that is semi normal as my schedule is always packed full of work,school and running. I arrived about an hour before race time and picked up my number.

This race had no shirts but they did hand out these cool water bottles that had the race logo on them. So that was different. There was a little confusion and disorganization handing out the numbers but eventually it all got straightened out. After getting my number I went and sat in my car  for about 30 minutes, staying warm, as it was right around freezing despite it being mid April. About 20 minutes before the race I stripped down to my Team Red White and Blue t shirt and my shorts. I then ran just about a half mile of warm up and hit the porto potty.

Quite a few of my running friends where on hand for this race and we stood around talking in the cold waiting on the start. Eventually it did start and with  a "Ready,Go" from the race organizer, we took off. We started off on the high school track and did almost a full lap before heading across the grass and into the park. My strategy was to get ahead of as many people as possible because I thought there wouldn't be much room to pass once we got on the trail. 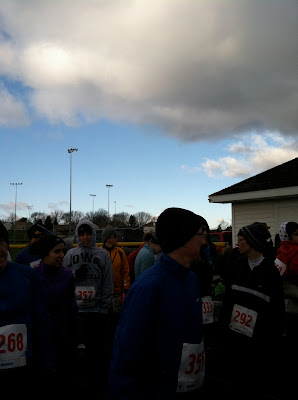 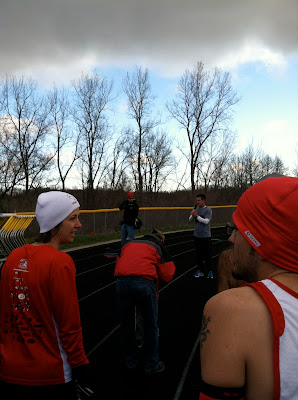 So I was ahead of all but about 5 people when we hit the trail and headed downhill into the park. However I could hear people right on my tail as we took a left and headed along a fairly flat gravel portion. In the distance probably about 100 meters or so ahead, I could see my two friends Ross S and Ross K battling it out with another runner for first as the headed towards the woods. I wanted to keep them in sight as long as possible but lost them never to see them again once they hit the treeline. As I hit the treeline we ran up hill then downhill in what would become a recurring theme during the race. After a short flat section we turned right and uphill again. It was on this hill I was passed by two guys that looked like triathloners based on what they were wearing. One looked to be in my age group so I tried to keep up but his long legs left me behind. 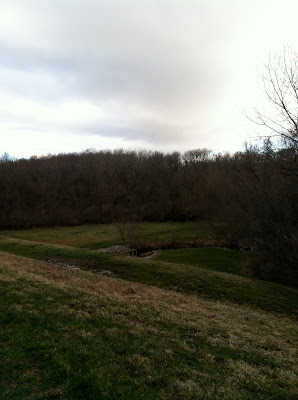 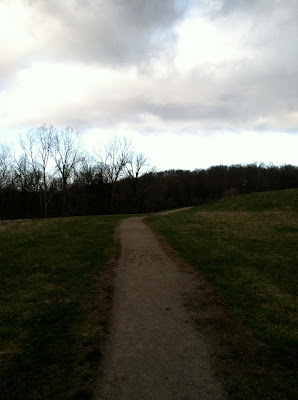 My Garmin buzzed just about the top of the hill and I had ran a 7 minute mile for this first mile. I could hear people behind me however so I channeled my inner Kilian Jornet and bombed the downhill figuring I would either crash or gain some distance. Then we turned left and headed for another flat section ending in another hill. During this section a young lady passed me as we headed up a twisty hill. I tried to maintain my pace and run upright because I had plans to run some more after the race and didn't want to injure myself. I glanced behind me at this point and saw my friend Kelly about 30 yards back. As we went downhill again and then uphill she also passed me. She gave me some words of encouragement and pulled away going up the hill. Are you seeing a theme here? I need to work on some hills. This is the second or third race Kelly has caught and passed me on a hill. At this point I had hit the 2 mile mark running about a 7:40-8:00 mile. I couldn't see for sure as my Garmin was a little foggy. The last mile was pretty standard but smack dab in the middle of it was the biggest hill of them all. I did feel good as I powered up it because I passed the young lady that had passed me earlier. I looked a head though and there was a kid about 12 years old ahead of me. How did he get there? He must have been in front of me the whole time. I spent the rest of the race trying to catch him but it was not to be. This kid was pretty fast for his age and maintained our separation. So I took the last left and headed up the hill to the finish line. Crossing the finish line I hit my Garmin stop button at 25:00 on the dot. I ended up averaging 7:45 per mile which is pretty good for a hilly muddy course. Ross S ended up being 1st overall and Ross K was third. Kelly took 1st female. I think I came in 2nd in my age group and 10th overall. That is my story and I am sticking to it. After the race Ross S, I and Kelly ran another 2 hours and 50 minutes to get in some extra miles. Was a good day. 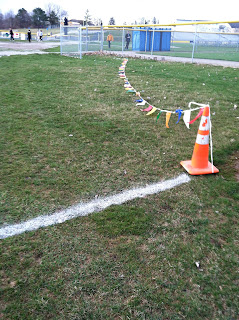 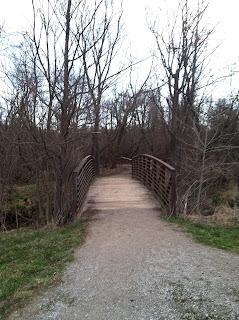