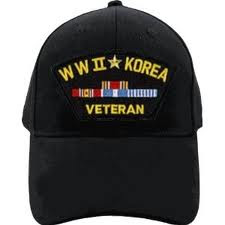 As a member of EMS in rural Iowa I pick up my fair share of older folks. Iowa has a large geriatric population and it is getting bigger. However the other day I had a patient that both made me proud and sad. Recently we picked up a 95 year old gentleman from a care facility to be taken to a local hospital for evaluation. This gentleman wasn't too thrilled with  the idea to say the least. The sad fact is these folks often go to the hospital never to return and the other residents know this. We EMS providers have a duty to transport them for care but it often isn't a very pleasant job.

It was my turn to attend the patient so we loaded him on the cot and placed him in the back of the ambulance. Once he was comfortable and hooked up to the monitor my partner hopped in the driver's seat and started heading towards the hospital. I wasn't providing much but comfort care so I struck up a conversation trying to ease some of his stress.

He was wearing a hat that said " WWII/Korea Veteran" so I asked him which war he was in. He said "Both". I mumbled some comment about being a Vet myself but I find it hard to compare my service to men such as this. Men that spent years away from home, with no contact but the occasional letter. I don't know if it is hero worship or just much respect. This gentlemen told me he had been in the Navy and was a gunner on a Torpedo Bomber. He had been in Navy for 10 years much of that in combat. Then he had come home and driven a truck for 40+ years. Raised a family and went on with life. His wife had recently died and now he was all alone. By the time we reached the hospital I had him laughing but inside I felt sadness that great Americans such as these ended up so lonely.

We are losing the Greatest Generation day by day and week by week, our newest greatest generation. Veterans from Iraq and Afghanistan are everywhere. Working jobs and raising families. I hope in 40 years things do not turn out the same.
Posted by mikemac356 at 22:05