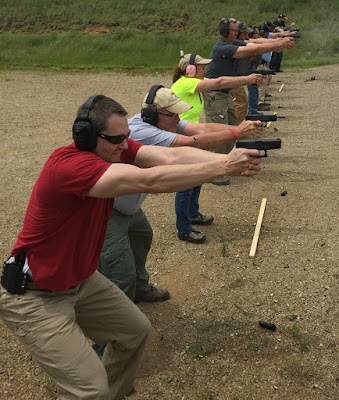 The day after Combat Focus Carbine I regrouped at the Big Springs range in Searsboro Iowa for the two day version of Combat Focus Shooting taught by Rob Pincus and a part of the Personal Defense Network national tour. I had taken the one day version of this course titled Fundamentals of Combat Focus Shooting back in April with Ken Crawford and Allesandro Padavoni. I enjoyed that course but I was looking forward to the two day version to practice some more skills but more importantly to learn from the teaching techniques of the man who developed the Combat Focus Shooting program. Although this was an end user class I was really looking at it as a bit of instructor development for my classes as a I.C.E. Defensive Firearms Coach and potential CFS instructor candidate. 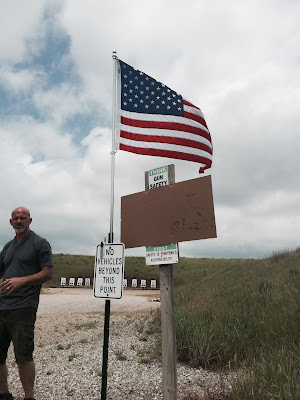 As he did with the CFC course Rob spent a fair amount of time explaining the course and some of the CFS principles prior to any bullets going down range. He talked about Safety,Comfort and Competency and the three safety rules. He gave us the context of the course. CFS is a shooting program that teaches you to shoot efficiently in the context of a Dynamic Critical Incident. A Dynamic Critical Incident is defined as surprising,chaotic and it involves the presentation of a lethal threat. In the context of this class the lethal threat was more than two arms length away. CFS is also a intuitive shooting program that works well with the body,works well with the gun and works well within the context of intended use. As he had the previous day he talked about  efficient vs effective and physiological vs psychological stops to an attack.

We did many drills during this two day course so I will not list them all here. Suffice to say we covered, critical incident reloads, malfunctions, the Balance of Speed and Precision,presentation from the holster, lateral movement, Multiple target engagement,weak hand only engagement, strong hand only engagement, volume of fire and many more. As previously described in the CFC post we did all this while under varying amounts of stress such as experienced during the "take a lap' and "wind sprint" drills. What I want to talk about is what I took away in regards to the "why " of CFS. 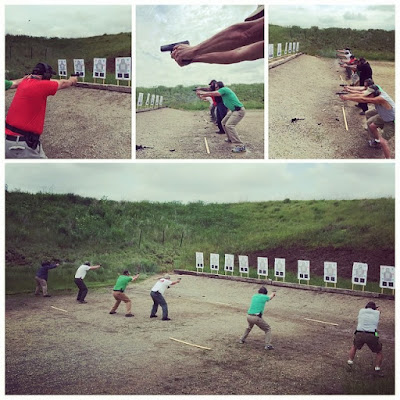 The first concept that resonated with me was the explanation of competence. Rob explained how when we learn a new skill we work through four levels of competence. First we are unconsciously incompetent because we don't even realize we need the skill. Secondly we are consciously incompetent as we learn our need for a skill and its employment. Thirdly we are consciously competent as we refine our skill yet have to think about its use. Lastly we become unconsciously competent as the skill  becomes "second nature" and we don't think about its use. Rob used the analogy of moving you foot from the gas to the brake while driving. When we first learned to drive this was a conscious movement but now for most drivers it just happens. Personally I equate it to my time as a military free fall parachutist. During the MFF basic course I was often a tumble biscuit as I tried to control my body and make it do what I wanted as I struggled to maintain my stability in the relative wind. By the time I was a senior MFF instructor myself I only had to have the desire for something to happen in the air and my body made it happen much like the brake analogy.

Rob used a couple of analogies that will also help me refine my own instructional technique. He talked about the Christmas/Lottery model of shooting precision. In this model a child is opening presents at Christmas. Every present is expected to have a wonderful gift inside. As each present is opened the child's dopamine levels rise and a euphoric feeling is experienced. But inevitably some presents contain socks or tshirts from Grandma. So disappointment happens and dopamine levels drop. In the lottery model however individuals buy a lottery ticket never fully expecting to win but if they do dopamine levels rise unexpectedly. Rob wanted us to be the Christmas shooter and not the lottery shooter. Have the confidence and expect to get the hit and be disappointed if you don't. Don't send the shot down range and be happy if you get the hit by chance.

The Balance of Speed and Precision is a core concept of the Combat Focus Shooting program. It is drilled and talked about in many different scenarios. The underlying concept though is that the shooter should shoot as fast as possible while still getting the necessary hits in the intended target. They target itself defines the need for the amount of precision. Rob has developed another analogy that makes this easy to understand. Imagine a U shaped tube partially filled with a liquid. Each stem of the U has graduations from 1-10 with the 1 being at the top and the graduations moving down. On the left is speed and on the right stem is precision. Also on the right stem is a pump that can fill the tube with pressure. Based on the target increasing pressure is forced into the tube. As the need for precision increases numerically the liquid on the speed side moves towards a lower number and vice versa. It was a brilliantly simple yet effective graphical representation of the Balance of Speed and Precision concept. I have hopefully reproduced it accurately below. But you get the idea. 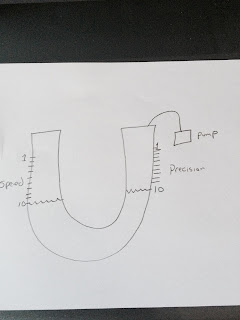 The last concept that Rob explained in some detail was the phenomenon of Tachypsychia and Bradypsychia or the perceived speeding up or slowing down of time during a DCI. He utilized another story and graphical representation that would lose a lot in translation here but suffice to say it involved commandos, spy satellites and terrorist bad guys. This story also made the concepts crystal clear in my mind.

All in all this course was what I had hoped it would be. I honed my own skills while learning some innovative ways to teach the I.C.E. Training Company Concepts. I am looking forward to my chance at becoming a  CFS instructor in the future and teaching these concepts more thoroughly to others. 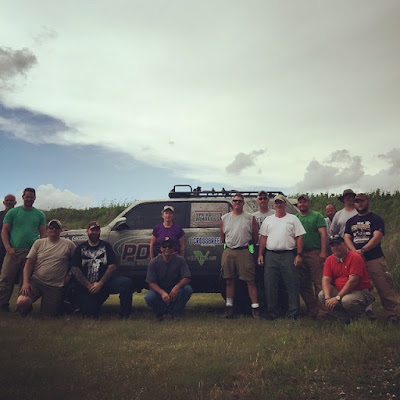 Finally I give you a video of my figure 8 drill. Shows that even an experienced shooter that has run the drill before can experience cognitive dissonance. Keep training.