Today was the 25th anniversary of my graduation from the Special Forces Qualification Course. I posted as much on Facebook. Eventually the comments on the subject turned to a fallen classmate, Carl Creely. I am embarrassed to say that the sands of time had clouded my brain on the subject. However I would like to correct that error. Carl was my classmate in the 18B Weapons Sergeant Course. He was a quiet man and a proud Infantryman. He was not the highest achiever in our class nor the lowest. Carl was a good, steady, level headed NCO.

Our infiltration parachute jump into Phase 3 (Robin Sage) was a night time combat equipment static line jump from a CASA 212 aircraft. Carl was on different "stick" than the one I was on so most of my information is hearsay. Reportedly Carl made a tree landing breaking his pelvis. The pain being so great he incorrectly undid the leg straps of his parachute before he undid the chest strap in an attempt to climb down form the tree. It was reported variously that Carl hung himself tragically on his chest strap or he bled out from the pelvis injury. What is not up for discussion is that he was transported to the hospital where he lingered a few days and then he passed. Carl was one of the countless unsung warriors that have died for their country in training accidents and non combat related incidents. I honor his service. 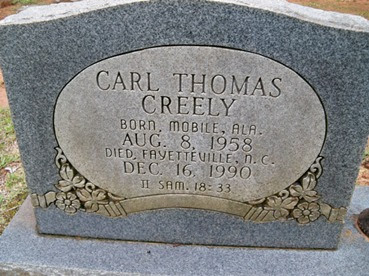