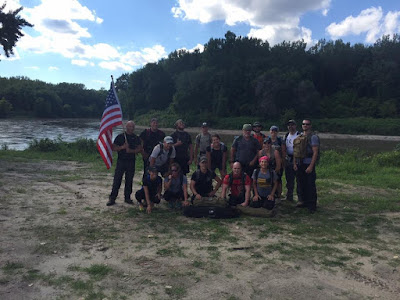 I first heard of GoRuck about 2 years ago. GoRuck is a gear company founded by Special Forces Soldiers that primarily specializes in guess what? That's right rucksacks. To better promote their product through "good livin" GoRuck "cadre" facilitate a variety of rucking/selection style events around the country. The events are patterned on Special Forces selection and are of varying lengths and time durations. Check out the website at  http://www.goruck.com/ . Anyway ever since I heard about the events I wanted to try one. So finally I signed up for the shorter event the GORUCK Light. It is billed as a 4-5 hour event where you will ruck 7-10 miles. There is a minimum packing list and ruck weight requirement. There is also the requirement to bring a team US Flag with a pole that can support "the weight of freedom" and a team weight. About 2 days before the event our cadre, Cadre Cleve posted a overhead photo of our starting point along with the departure time. Thats it, reminds me of when I went to selection and they would write stuff on the white board with no explanation.

Google maps made it pretty easy for me to identify the start point as the beach at Greys Lake in Des Moines Iowa, and off I went. I arrived about 30 minutes early and saw a few folks that were obviously there for the same purpose. I got dressed, peed about 30 times because I was hydrated,nervous or old. I leave the reason up to you to decide. I grabbed my ruck and the flag that I had brought and went to the formation area. At 1400 15 of us lined up in two ranks and laid out the contents of our ruck for inspection. Cadre Cleve and Cadre Zak inspected us and told us to ditch any watches or phones. They would not be needed. Once we were packed back up two Team Leaders were designated and off we went. I was carrying the flag initially. I forgot to mention that our instructions were to get to a certain way point about 2 miles distant in under 40 minutes. Also in addition to our rucks we had a 120 lb sandbag, an 80 pound sandbag, two 60 pound sandbags and our 15 pound team weight that also needed to accompany us for the entire journey. We also had to stay within one arms length of the person in front of us.

I won't describe every step but suffice to say that many memories were brought back as we constantly rotated through carrying the heavy sandbags in addition to our rucks. I truly felt as if I was back in selection at least for those 5 hours. The crushing weight got heavier and heavier as we marched farther and farther. We eventually incurred the additional task of carrying one of our teammates and their ruck as a "casualty." I could see fatigue starting to make cowards of a few people as they were slower and slower to rotate in. Taking just that few extra seconds of a break. I also saw some studs who stepped up and shouldered more than their fair share. about a third of the way through we stopped for a PT session which culminated in about 100 yards of bear crawls and crab walks. This kicked my butt and it ended up for me being crab ass drags.There was also a brief talk about leadership during this "break."

A little further along the cadre stopped and had us link arms. We all walked about knee deep in a random pond. There they had us do more PT in the water or a "hydrological survey". I actually enjoyed this as the water did wonders to cool me off on a hot day. Little by little we wound our way back to the start point. About a mile out the cadre informed us we had 8 minutes to make the end point. So after pushing along for 4 hours we had to push harder to make the linkup time. At that point I was again carrying the flag and I was running with it like a guidon as my teammates followed close behind carrying the sandbags on their backs.

Once we finished we again lined up in ranks. The cadre handed us our GoRuck patches and we took a team picture. After I got my patch I coined Cadre Zak. All Go Ruck Cadre were in Special Operations as I was. Cadre Zak in his intro talk had said he had spent his career in 10th SFG(A). My old unit. He was shocked. Cadre Cleve looked at me and said "way to be the grey man." This was a compliment as it meant I had not been a spotlight Ranger nor had  I drawn attention to myself by being a slacker. No higher praise for a special operator. After wards Cadre Zak and I exchanged bonafides,war stories and "hey do you know this guy?" until I had to leave.

All in all this was a fun event. I will probably be doing another one in the future. I am looking for competitive events to replace my ultrarunning as it looks like my body won't allow me to do that any longer. But I still have the desire to compete if only against myself. As Cadre Cleve said "Just because it is light doesn't make it easy." 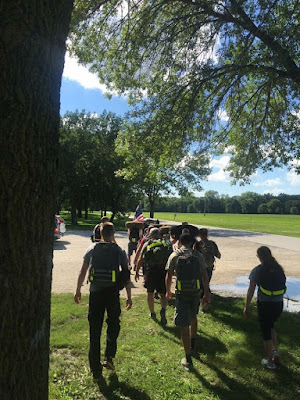 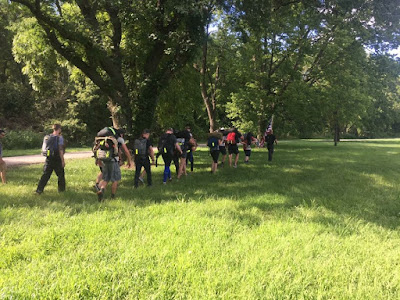 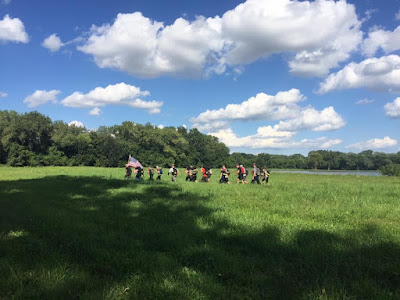 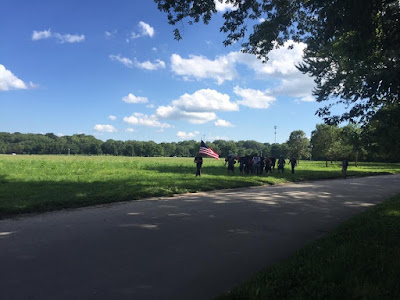 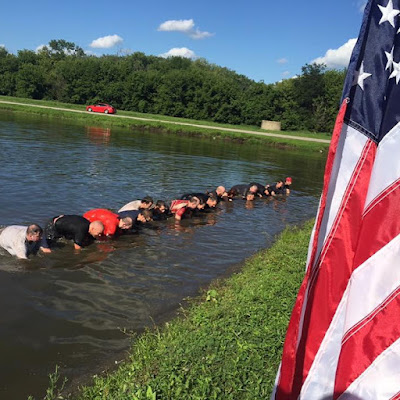 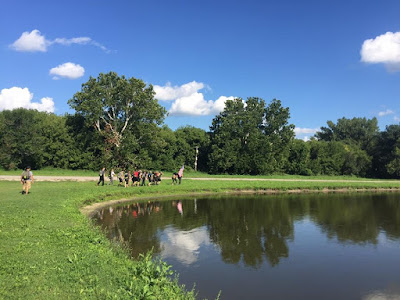 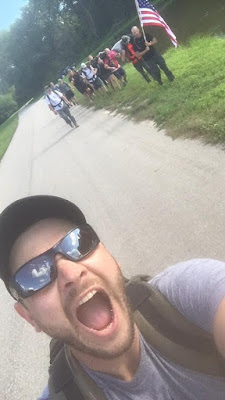 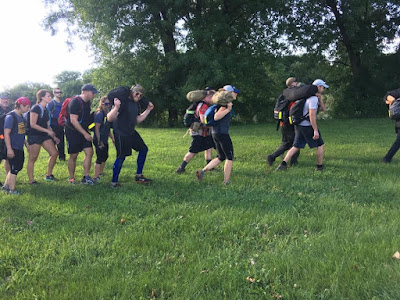 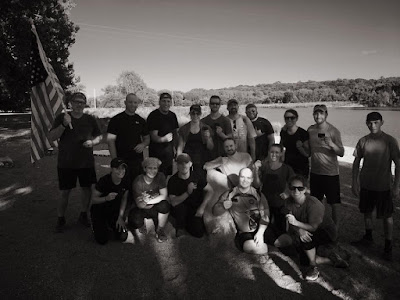 Email ThisBlogThis!Share to TwitterShare to FacebookShare to Pinterest
Labels: goruck.formeractionguy