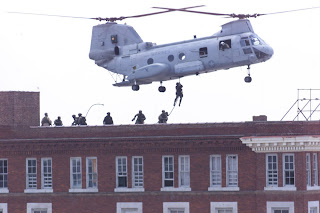 What is a "Former Action Guy?" Well to be a Former Action Guy implies that you were once an "Action Guy." Action Guys are known by many names "Door Kicker", "Snake Eater", or even "An Operator. " I retired from the US military in 2004 after 22 years service, I spent 14 years of that time as a Special Forces soldier or "Green Beret", think John Wayne. I did the typical Action Guy things like move,shoot, and communicate. I hung out with other Action Guys, I studied Action Guy materials and watched Action Guy shows. I was an Action Guy.

Then I retired and suddenly I was a Former Action Guy. I chose to move myself and my family back to the Midwest and I took an office job. I was about as far from being an Action Guy as I could be. Sure I tried to keep up with the Action Guy lifestyle for awhile, I applied for a few law enforcement positions, I toyed with the idea of going back overseas as a contractor but because of family considerations and other things none of this panned out. So there I was stuck in an average everyday guy job still feeling very much like an Action Guy but miserable because it was obvious I was not.

In a society which very much ties a man's job to his sense of self worth, I had went from the top to the bottom. I had been at what many would call the pinnacle of the military experience, I was a member of an elite unit with a rich history then in a day that changed and I was just another guy. Life by necessity moves on but as a guy with a type "A" personality and an admitted over achiever I found it very hard to come to grips with my loss of status.

So I dealt with it, I quit my crappy office job and got a job in the security industry which I enjoy and while not as exciting as what I did before still makes me feel like I am contributing to society in a positive way. I still get my "Action Guy" fix now but in different ways. I joined a running club and run long and short distance races, I have gotten into mountain biking, and back into pistol shooting. I want to try turkey hunting. I am a state registered High School sports official in Football,Wrestling, and Baseball and officiate hundreds of contests a year. I got certified as an Emergency Medical Technician and volunteer at a local ambulance service 90-100 hrs a month. I plan on upgrading to paramedic sometime in the future. I have become involved in veterans affairs and am active in the local Veteran's of Foreign Wars and the Knights of Columbus.

As a Former Action Guy I still get to do some cool things. I helped a newborn baby, born unexpectedly and at home make its way to a hospital. I assisted in the rescue of 8 drunk and hypothermic college kids who may have been fatalities if we hadn't pulled them from that icy creek. I have officiated matches of State Champion wrestlers and acted as Back Judge in a games between top ten Football teams. I took my youngest shooting and taught him how to aim a pistol. I ran for City Council and lost ( I did get 10% of the vote though). So after 6 years I have adjusted to life as a Former Action Guy. This blog is part of that process, I will be posting old war stories mostly so I don't forget them and random thoughts. For my friends these events may or may not resemble what you remember but it is my story and I am sticking to it.

So Ciao and for those that know DAJETFU.
Posted by mikemac356 at 05:21