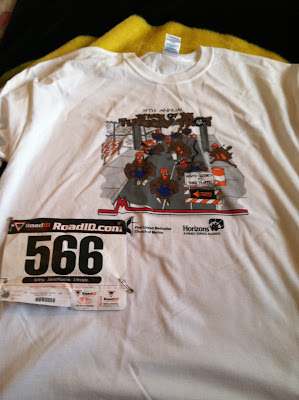 So once again I laced up my running shoes for my monthly race. The month of November it has become tradition for me to run the Return of the Turkey Trot 8K. This would be my third year running this race. The race is held in the next town over so it is also convenient.
So the morning of the race as per my usual pre race ritual I hit my snooze alarm until it was too late to hydrate or eat anything. Once I finally got out of bed I had just enough time to change into my running gear and drive the 9 miles to the start. Temperature was in the low 30's so beside wearing my running pants and a long sleeve shirt I brought a stocking hat,jacket and gloves for the race. Besides the temp however the sun was shining and the weather was good for running.
They had moved the start of the race about 2 miles south to Marion High School from its former location in front of the middle school. This was due to some major road construction around the former start. Said construction also made it difficult to get to the start since a lot of roads were closed. Parking was at a premium and I ended up parking in the back of the high school on the grass as all the lots and streets were full. As a mentioned last year http://mikemac356.blogspot.com/2010/11/return-of-turkey-trot-8k-2010.html this race has gotten bigger than most local 5K. I think they said there were 1800 runners/walkers registered this year.
One thing I did like was that they actually took over 50% of the suggestions I had to make the race better this year. They staggered the start times for the races, changed the routes for all the races and added chip timing. However probably because of the location, porto potties ( I didn't see any) were still at a premium and water stops were still only 2. But I can see they are trying and it is overall a fun time. So once I parked I decided to ditch the jacket and gloves but I kept on my stocking hat. I walked in to the school to use the facilities and on the way out got to see the race mascot. 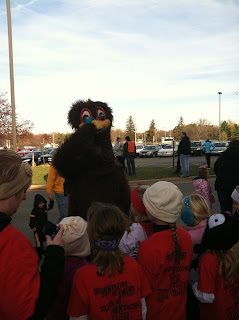 The reason this race is so popular is that they really make it a community event and there are a lot of school kids on "teams" running the 4K. The kids love the turkey. After hanging out with Mr. Gobbler I moved to the start line and waited for the signal. Right about 0900 at race start the mayor gave us a few words, they played the National Anthem and gave a benediction. Due to the staggered start the 4K runners would start after us so there were many people milling around when we got the READY,SET,GO!!!! 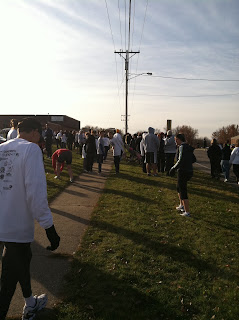 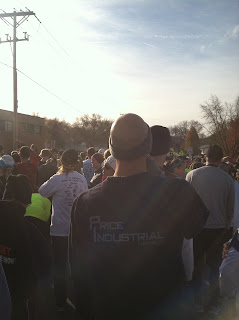 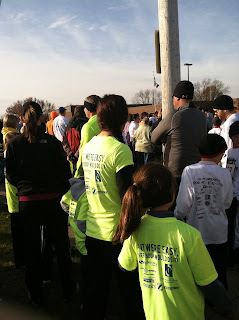 Once the race started it took me about 30 seconds to get to the actual start line due to the crowd and the fact I always start at the back. We ran slightly down hill for about .5 miles until we took a left into a residential neighborhood and started heading up hill. All of the route for about the next 1.5-2 miles was familiar as the course in prior years had run by the high school so in reality we were running the same course from a different start point. I was feeling pretty good and like always I started out fairly quick (for me) until I settled into my natural pace assisted by the adreneline of racing. The first two miles we ran south and east away from the start. The neighborhood also had some fairly significant ups and downs which tested my endurance as I don't run a lot of hills. I was really concentrating on trying to run upright to keep my lungs open and keep a quick foot turnover. I passed the first mile in 8:33 watch time and 9:00 gun time. I was breathing hard but easy as we headed back north and west. 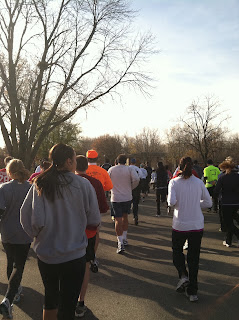 At this point we joined the 4 k route for about a block and then turned back on our own. This was uncharted territory as this was the part of the route that had changed since last year. This part was fairly flat to rolling and somewhere about mile 3 I passed Kris T. who is married to Brian T. who I ran with in the Muddy Monster 15K. I asked where he was and she said he was up ahead somewhere. I continued on pace trying to run easy. We turned west and where now running past the old start point. It was somewhere in this area that I met up with my old nemesis from last year "little guy who runs." He is a year older as am I but you gotta have alot of intestinal fortitude to run like that as a 9 year old. I wished him luck as I passed him, there would be no back and forth today I was feeling too good.

The route continued west on a long fairly flat straightaway. I hit the 4 mile point in 33:21 and I knew I was on pace for a 8K PR. Looking ahead I recognized Brian about 500 meters ahead of me. I decided I would just keep running and if I caught him so be it.As it happened we turned back south towards the finish line and I steadily gained ground on him. Just about the time I caught him we headed into the cemetary. I had forgotten about the cemetary since in the last few years it was at the beginning not the end of the race. The route through the cemetary starts with a steep downhill and finishes with about a 200-300 yards steep incline to run out of it. Deviously they had kept it as part of the route. I passed Brian on the downhill and waved and remarked how the hill was going to suck, he agreed. I powered up the hill, passing many, but it took a lot out of my legs. Brian caught me shortly after the crest and we ran together for about a mile. As we turned back south and uphill for the last .5 miles to the finish my legs were still feeling the cemetary hill and Brian pulled ahead. I kept up my pace however and crossed the finish line just behind him. 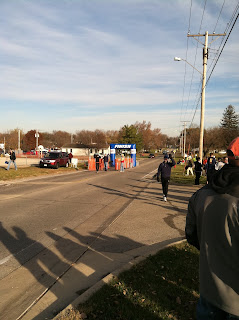 Gun time was 42:03 and my watch time was 41:46. I had run a PR and beat my time from last year by over 2 minutes 30 seconds. As a bonus since I had started out at the back and he had started in front of me I had actually beat Brian by 6 seconds..sweet. Its fun having somone to run against even if its not really a competition. Now I have to find a December race.