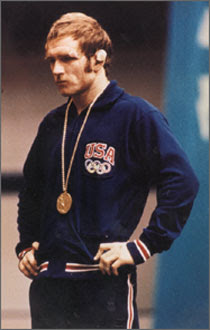 Where I come from the sport of Wrestling is as popular as any other with possibly the exception of Football. The average wrestling fan in the state of Iowa is probably one of the most knowledgeable of any "casual" fan you might meet. We live and breathe wrestling at all levels like those in Texas do Football. In my room at my parents house I had two posters on my wall. John Wayne in the movie "Green Berets" and the above picture of Dan Gable, multiple Iowa High School,NCAA,and Olympic Champion. One defeat in his High School and Collegiate Career. Unscored upon in the 1972 Olympics, and legendary coach of the University of Iowa Hawkeye Wrestling team.

As a high school wrestler honestly, I wasn't very good. I was unbeaten at the Junior Varsity level and about .500 at the Varsity level. However this didn't keep me from dreaming big. I would get up in the morning and run the 10 miles to school in a rubber suit (most of this stuff is frowned on, if not illegal for High School wrestlers now.) I would lift weights every day with the football players, I would run home. I would go days without eating trying to make weight. I would do things differently if I knew then what I know now but who wouldn't? But I was going to be like Gable. I knew that I was going to be an Olympic Champion. I believed it with my entire being. The year I failed to make the District tournament was one of the most devastating of my life.

But look what wrestling taught me. It taught me you had to be tough to realize your goals. It taught me everyone doesn't always get what they want. It taught me that you can push yourself farther than you think you can.It taught me to make a plan, to drive on to the objective and aggressively take what you want. All these things I used and still use.

During my 22 year career in Army Airborne  Infantry and Special Forces units I readily credited my wrestling experiences with giving me the edge to take on and pass the challenges of Ranger School,The Special Forces Qualification Course, Military Free Fall School and many other special operations courses.Wrestling gave me my first taste of what I was made of and what I was capable of doing.

When I retired from the military and moved back to Iowa, the epicenter of wrestling, I decided to give back to the sport. I knew I wouldn't have time to coach but I thought I could officiate, so I became a wrestling offcial and have been one for 7 years now.Officiating has its ups and downs, the fans in this state cut no slack when it comes to the sport. At any given high school meet in this area, 20 miles from the University of Iowa, you might see any number of former state champions, NCAA Collegiate Champions or even the odd World or Olympic team member acting as a coach or even just sitting in the stands as a parent. Everyone in this state has wrestled or knows someone that did. The pressure is intense even at the High School level and the Iowa State High School Wrestling Championships are televised statewide and have a rich tradition.

I enjoy everything about the sport and as the season starts for another year I have started officiating once again. When I am out on the mat seeing two young men and even a few young women these days, I am intensely watching as they grapple with each, trying to bend the other to their will and assert physical dominance. Sometimes I look at these athletes and wonder which one of them will be the next Olympic Champion, the next Ranger, the next Green Beret. Or which one of them will always remember when they were simply just a "wrestler."
Posted by mikemac356 at 19:35