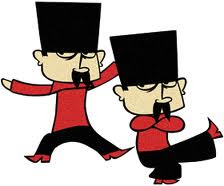 Every Special Forces soldier is taught a language. It is one of the characteristics that separates us from other Special Operations Forces. The old joke ( at least among my peers) is a guy in a bar asks a grizzled SF vet. "What makes you different than a Navy Seal?" The SF guy turns to the guy and fixes him with a long stare. Then he proceeds to launch into a 15 minute operations order entirely in German. Once he is finished he takes a breath and repeats it in Czech. He then turns back to the bar. To me that says it all and is mostly true.

When I graduated the Special Forces Qualification course back in 1990 I was assigned to the 10th Special Forces Group. 10th Group's Area of Operation was Europe and the Northern Middle East at the time so I was told that I would have the privilege of learning the Russian language.

So for the next 5 months or so I attended the Special Forces Functional language program as it was known at the time. To be quite honest we spent most of the time trying to figure out how not to study or how to trick our instructor into getting off topic. My first instructor was a female who had emigrated from the Soviet Union a few years prior. She was hired because she was a native speaker but we used to do everything we could to goof off. She used to let us bring in movies on Friday as long as they were" language" related. One week we watched the "Life of Brian" because we convinced her that this scene taught us grammer. Good times.


She did manage to pound enough of the Русский язык (Russian Language) into my head that I was able to give a 25 minute class entirely in Russian on safety checks for a 60 mm mortar as a graduation exam. Once I was done though I was assigned to my first ODA and language training took the back burner as I tried to assimilate and learn all the new skills a cherry operator needed to know.

However keeping with the theme of jack of all trades master of none that is prevelent in Special Forces I would attend "language refresher" every 18-24 months. We would spend several weeks studying Russian and being "refreshed." Don't let me give you the wrong impression, our chain of command took this training seriously. Many of my cohorts were sent to immersion training or the Defense Language Institute in Monterrey California for advanced language studies. I took it a serious as I could. During the course of my career I managed to score a 1/1 on my Defense Language Proficiency Test (DLPT) test at one point. The DLPT was graded on a sliding scale and we took it yearly. The scale went from 0/0 to 5/5. The first numeral was your reading score and the second was your listening. Those that went to DLI also had a verbal portion but I never was required to test on that part.

Anyway for a reference point you and I probably read and understand English at a 4+/4+ level,unless you can describe nuclear physics, then you are a 5/5. I had to score a 1+/1+ to be paid for my language ability and a lot of my peers did just that. I never put out enough effort and just studied enough to pass the test. A 1/1 meant I could carry on a decent conversation but no one would ever mistake me for a native speaker.

And so it went for the next 14 years I went to language refreshers but after the fall of the Soviet Union I never had much chance to use my language ability. I would often wonder why I didn't get to learn German, Czech, or Polish. Those guys were using their language all the time and getting some sweet TDY out of the deal. Not for us Russian speakers though. That is until 9/11. Suddenly I found myself in the former Soviet Republic of Uzbekistan. We were training the Uzbek Spetznaz and the only common language we had was Russian. Finally I was using my skills. Everyday my vocabulary and use of the vernacular got better and better.

One day we were in the little cafe on the Uzbek base eating lunch. The "cafe" was really the living room of one of the soldiers apartments that they converted to a place to eat for extra cash. Grandma was handing out the black bread and borscht while we all sat around the kitchen table and drank shots of vodka. We ate family style and the din of conversation was overwhelming. The Uzbek soldiers were laughing and refilling our glasses as we tried to maintain rapport and not get too drunk as we still had an afternoon of training scheduled. As Team Sergeant I was walking a fine line, this is what all my training had been pointing me for most of my career. Leading a ODA in a remote location, teaching native soldiers in their own language. Eventually the conversation turned to the recent Olympic games and the different sports. One of the soldiers was talking about the ice dancers, I was trying to steer the conversation towards getting back out to the range but I was having a hard time getting the Uzbeks' to focus.

The Uzbek LT.finally looked at me and asked if I knew how to dance? I looked him square in the eye, tipped my shot of vodka back and said Не танцуют ( I Don't Dance)!!!! He roared with laughter as he helped me herd the cats back out into the mountainous winter weather for more training.

So that pretty much summed up thousands of dollars in language training..I don't dance