The gloves are off: MV Council Member draws the line 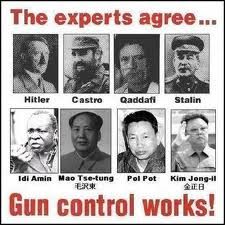 Like a lot of other gun owners and 2nd Amendment supporters I have been engulfed in the battle that has been raging about our rights as citizens and what that means in relation to my ability to defend my self and my family. I have made numerous posts on this forum and others championing the 2nd Amendment and what that means to the me. However most of the battle has happened in far away places with exotic names like New York, Washington DC, and California. I mean we here in the Midwest are experiencing the same general ammunition shortage and rising prices as gun owners in the rest of the country but a gun grab would never happen here in fly over country..right?

Wrong.. as I have said before there is no "national conversation" on gun control, there is no reasoned debate, there is no common sense. It is very evident that those that call for more gun control have the ultimate goal of total disarmament.

20 miles from where I live a city councilman has proposed in council chambers such absurd measures as law enforcement concealing their weapons, storing weapons at police stations and universal gun registration. This is in a small town that I have a close connection with. I am a member of  the VFW and American Legion in this town. I spend 5-6 evenings a month as a member of the volunteer ambulance service in this town. I spend a lot of money in this town. This councilman has brought the fight for my rights to my backyard. Watch the first 4 minutes of this video dated 12/17/12.

That isn't all. At the very next council meeting this same councilman dares to state that our rights under the 2nd amendment are no longer valid. That they may have been originally but not now. That no one has the right to own a weapon to protect themselves from the government. Watch this video from the council meeting dated 1/21/13. Cue it up to 3:36 and watch as long as you can stand it.


Sir, I respectfully disagree. You and those like you are exactly why the Founding Fathers crafted the 2nd Amendment. You do not bestow my rights upon me, they are bestowed on me as a natural right of being a human being. You are not my King,. In this country we do not dictate what citizens can or cannot say. You sir are the wrong headed one, you live in a world that I do not have the luxury to reside in. You live in the world where government allows its citizens to live of scraps from its table of power. Mr Councilman you power derives from your constituents not the other way around.

This is an example of the fight that we are engaged in. They are coming to your town, to take away your rights under the guise of saftey. Stay vigilant my friends, do not be complacent. The Mayor of this town is having a forum on gun control on 2/9/13. I will be there and I am bringing my friends.

As the flag of my great state so proudly proclaims : OUR LIBERTIES WE PRIZE.. OUR RIGHTS WE WILL MAINTAIN