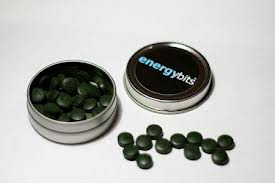 Almost every Sunday I participate on a virtual chat or forum on Twitter called #ultrachat. Nerdy I know but it is my kind of nerdy. Any hooo a few weeks ago the chat was sponsored by EnergyBits an endurance supplement. Towards the end of the chat as they usual do the moderator asked us our website or blog if we wanted to promote it. So I posted the address for this very blog. A few days later I got an email from the makers of EnergyBits. They asked me if I wanted a free sample in exchange for a review on my blog. Pretty smart marketing campaign..free advertisement for the cost of a little product. I agreed and a week later I had a sample arrive in the mail. According to the EnergyBits website:

Made from 100% organicallly grown spirulina algae and loaded with 40 nutrients, ENERGYbits® algae tabs have the highest concentration of protein in the world (64%) all for just one calorie per tab. Endorsed by the United Nations as the most nutritious food on earth, spirulina algae has been a favorite of Olympic gold medalists for decades and is a super food in every sense of the word, delivering instant and enduring energy to your brain and body.

I am a man of my word so here is my review:

I tried Energybits on two different training runs. The first one was a 12 mile night trail run and I took the recommended dosage of bits and headed out with no other nutrition. I ran at a moderate pace but after about 10 miles I started bonking a little bit. This was probably a combination of not eating most of the day and the late night running. As the Energybits are high in protein I think I was a little deficient on carbs for this run.

On the next training run I ran 20 miles on a combination of trail and road. This time I mixed the Energybits with some other nutrition, a few gels and other snacks. I was totally fine and didn't get hungry during this run although I still didn't take as much nutrition as I normally do.

What did I learn using Energybits? I found out that at least for me they need to be used in conjunction with other nutrition however I do believe they helped in my recovery as I didn't take a rest day this week and I wasn't as sore as I usually am when I do that. Overall I give them a solid B+