Man They Got Screwed 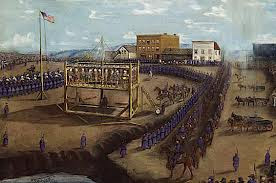 I was listening to a podcast on my run today. That is not unusual, I do that alot. What was unusual was the podcast I was listening to. Most often I listen to running podcasts or maybe one about guns. The one I listened to today had caught my eye because it was about Native Americans.

My Wife is Native American, 100% Arikara from North Dakota. I have always encouraged her to pass her culture along to our children. This has been met with varying success based on her willingness to tell them and their willingness to receive the information. Bottom line alot will be lost to my children when they no longer have their Mother to tell them the stories of her time growing up on the reservation. When she can no longer make them fry bread or cuss at the "sahNIŝtaaká", the white man every time a John Wayne movie comes on the TV.

I understand her frustration, she has told me how she was treated growing up by the Bureau of Indian Affairs. How she was sent to a boarding school at a young age where they would not let her speak her native tongue and they cut off her braids. Mind you this was not ancient history this happened in the 20th century. And that wasn't all of it. I have also read quite a bit about Native history in this country in an attempt to learn more about my wife and how she looks at the world. So I thought I knew how Natives had been treated.

The I heard this story about how the Dakota people where removed from Minnesota and Northern Iowa less than 150 years ago. This story is riveting.


Man those 38 guys and the entire Dakota population got screwed