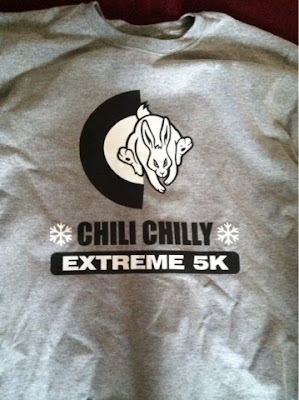 I heard about this race from a friend of mine Ross just a few days before it was held. I hadn't planned on racing anything this weekend but how can you resist a race that has extreme in the name? I looked at the website and decided to play it by ear and race day register. This might be the first time I have ever raced day registered. It is definitely the first time in as far as I can remember. I asked Ross what made this race extreme and he told me all about the stream crossings and the obstacles. Not like one of the tough mudder type events but a run through the woods with benefits. Sounded like my kind of event.

I was a little hesitant because 2 days before the race I slightly re injured my ankle. But I ran some trail miles with a brace on it and it held up fine. So I figured I would do the same for the race. So I left the house early, drank some expresso and ate a PBJ pita on the way down. I arrived in plenty of time and was able to register and then run about 1 1/2 miles of warmup with some friends. Ross was there and I asked him what to expect. He advised that I should get in the front or I would get stuck behind the slower people once we hit the woods. So that would be my strategy and it worked fine.

This was a really low key event. The starter actually said Ready, Set, Go!!! So the bunch of us took off. The first 1/2 mile was on a gravel access road and I was able to work my way to the front. I saw Ross S and another friend Ross K up in the front. I would not see them again until the end. Those guys are fast. We took a right off the gravel and ran across a cornfield. You ever run across a harvested cornfield against the rows? Not the easiest on the stride and those stalks like to stick places they shouldn't. So after the cornfield I entered the woods in 4th place.

We were literally running through the woods following the orange marking ribbons. There was no trail, so we bounded over logs, climbed over rocks, and weaved between trees. I kept trying to catch the guy in front of me but I was putting out max effort and not making any headway. I was breathing hard and decided just to not let the person behind me pass me. And so it went over hill and dale. We crossed some more cornfields, waded a creek about 5 times. Used ropes to climb up the banks, leapt over logs, ran through a junkyard and some culverts. Crawled through some pipes and generally had a great time.

The course was somewhat confusing and I made a few wrong turns but I entered the last 1/2 mile still in 4th place and that is the way I crossed the finish line. Unfortunately 4th place in the race was also 4th place in my age group ( the age group was 22-49). I had a great time though and between myself and my friends we took 1st, 2nd and 4th men and 1st and 2nd women. I will definitely do this race next year